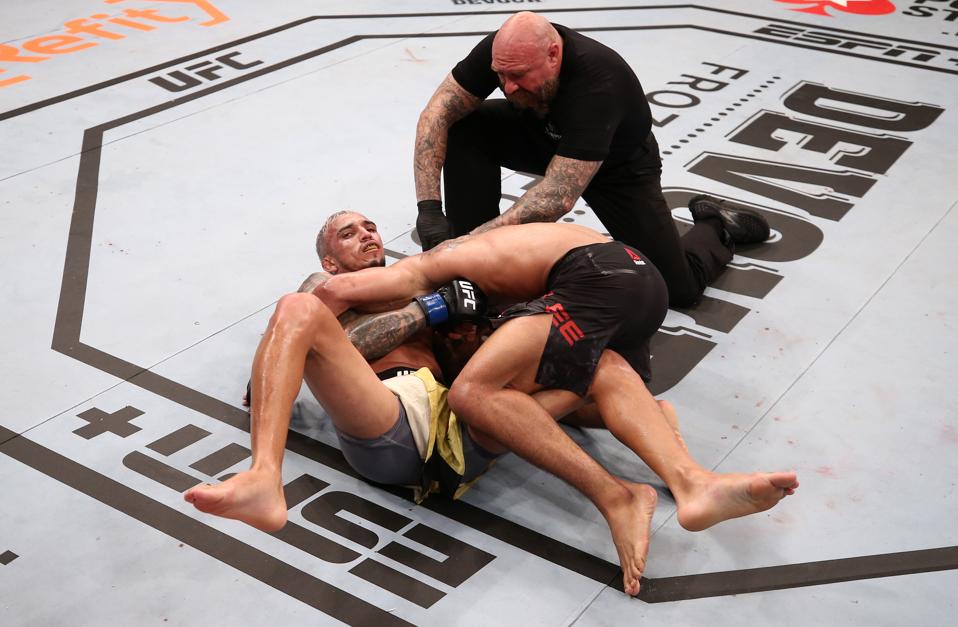 There weren’t any fans on hand in Brazil to watch, but one of the country’s hottest fighters remained on fire as Charles Oliveira pulled off a huge third-round submission win over Kevin Lee in the UFC Fight Night 170 main event on Saturday.

Oliveira again proved his striking has come a long way, but in the end it was his submission skills that led to the victory over Lee and a $50,000 bonus.

Through most of the fight, except for a couple of takedowns Lee secured, Oliveira was in control. He looked like the bigger man and the more effective striker. He walked Lee down and hurt him with strikes on several occasions.

When he finally attacked Lee’s neck, the tap came quickly. However, it appeared Lee lost consciousness for a moment, because it seemed he didn’t remember tapping out. He contested the stoppage with referee Mike Beltran, but conceded defeat after watching the replay.

The victory which was especially sweet considering Lee missed weight by 2.5 pounds, ran Oliveira’s win streak to seven. It should lead to him in the Top 10 at lightweight when the new rankings are released next week.

Lee was coming off a major victory over Gregor Gillespie in November 2019, but this setback was his third in four fights. That reality has to be hard to swallow considering he was once pegged as a can’t-miss championship contender.

After struggling to make weight in the past, missing again on Friday, and losing again, Lee finds himself in a tough situation.

The UFC and other major sports organizations are in a rough spot across the board. The sanctions in place because of the Coronavirus have cause the shutdown of most sporting events immediately.

The Nevada State Athletic Commission has halted all combat sports events until at least March 25 when the group will meet again. Because of the suspensions, cancellations and postponements, Saturday’s event may have been the last major pro MMA show for a while.

Don’t Freak Out About The ‘Obi-Wan Kenobi’ Disney...

The Coronavirus Is Making The Energy Sector Ill...