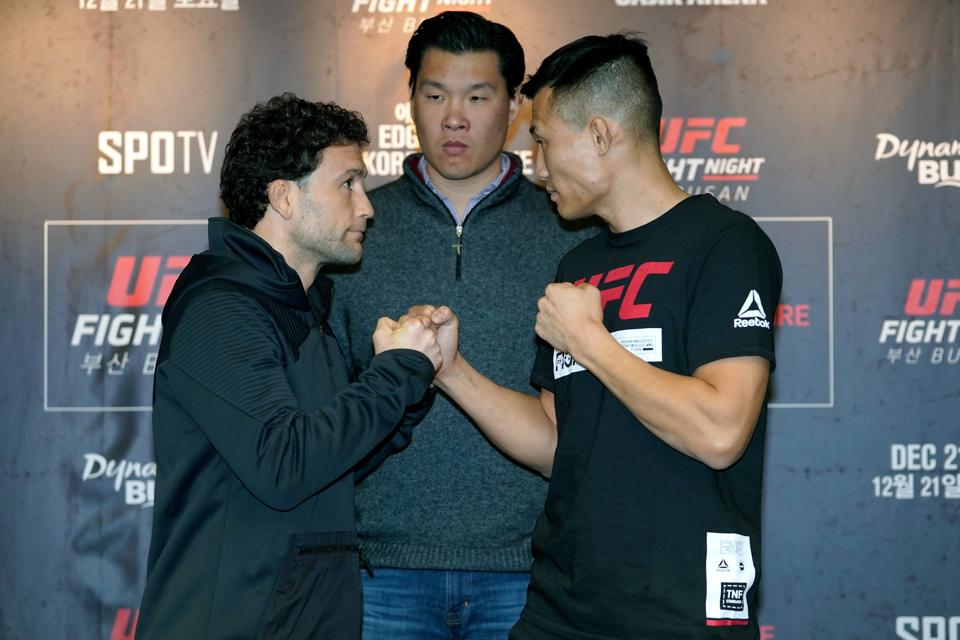 The final card on the UFC’s 2019 calendar takes place on Saturday in Busan, South Korea. The fight card, UFC Fight Night 165 takes place at Sajik Arena and is headlined by a featherweight matchup between former UFC lightweight champion Frankie Edgar and former 145-pound title challenger, “The Korean Zombie” Chan Sung Jung. These two were initially scheduled to face off in November 2018, but a bicep injury knocked Edgar out of that bout. Both Edgar and Jung are ranked in the top 10 in the featherweight division in the official UFC rankings.

A pair of top 10 light heavyweights meet in the co-main event. In that contest, ex-title challenger Volkan Oezdemir meets Aleksander Rakic. Oezdemir bounced back from a three-fight losing skid in August when he scored a second-round knockout over Ilir Latifi. Rakic began his UFC career with two decision victories. He has two first-round knockout wins in his two most recent outings. Rakic is in the midst of a 12-fight winning streak. Both fighters scored post-fight bonuses in their most recent victories.

UFC Fight Night 165 also marks the return of “The Korean Superboy” Doo Ho Choi. Choi, who has not fought since January 2018, became a fan favorite as soon as he stepped into the octagon. In his first fight with the UFC, Choi scored an 18-second TKO win. He followed that with two more first-round knockouts. When the UFC booked Choi against tougher competition, he faltered, losing to Cub Swanson and Jeremy Stephens. Choi has won a post-fight bonus in his four most recent contests. Choi faces Charles Jourdain in a 145-pound matchup. Jourdain lost his UFC debut in May when he dropped a decision to Desmond Green.

Before the fighters step into the octagon on Saturday, they will hit the scales early Friday morning. The first fighter is scheduled to hit the scale at 5 a.m. ET.

Robert Pattinson’s Batmobile Is A Retro Muscle-Car In...

What’s Podcasting Got To Do With Marketing?