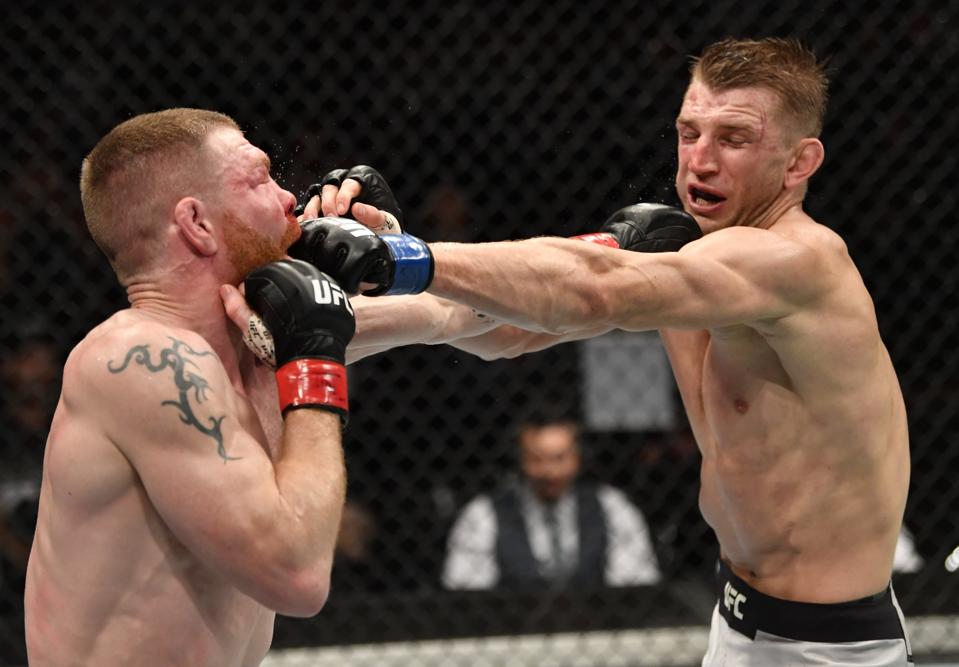 Dan Hooker and Paul Felder competed in one of the best lightweight fights in recent memory in the main event of UFC Fight Night Auckland on Saturday night.

Hooker came out on top when he got the nod in a split-decision victory. He controlled the early rounds marking Felder’s face with jabs and straights, while also attacking his lower base with leg kicks.

Felder’s right eye was swollen shut heading into the second frame, but the Irish Dragon didn’t stop pushing the action. He clearly planned to come forward in hpes of wearing his opponent down.

His pressure paid off in the late rounds. Felder began to find the range with his strikes as he took control of the fourth and fifth frames. However, Hooker did secure a huge takedown in the fifth to stop his opponent’s momentum. Quite frankly, that might have secured the fight for him.

It had to be a tough fight for the judges to score with many of the rounds being close, but Hooker’s sole takedown and his 122-110 advantage in strikes were enough for him to earn the victory.

Hooker needed a moment to catch his breath after the fight, but ultimately, he called out Top-5 lightweight contender Justin Gaethje. That’s an exciting fight and considering Conor McGregor is avoiding Gaethje, it might be the best fight The Highlight can get at the moment.

Felder hinted at retiring during an emotional post-fight interview, but fell short of leaving his gloves in the Octagon. Felder does excellent work as an analyst, and he mentioned how hard it is to leave his five-year-old daughter whenever he’s training.

Felder is one of the best in the sport in his second job, but he also seems like the kind of guy who would walk away and get the itch to return a year or so after retiring. We’ll see.

In the meantime, Hooker and Felder posed for this picture after both were sent to the hospital following the brutal bout that won Fight of the Night bonuses for both men.

More than 10,000 people paid to watch the card in Auckland. It is clear, the UFC is huge in New Zealand and Saturday’s event elevated Hooker, Brad Riddell and Jimmy Crute’s star level because of their wins.

Crute won one of the Performance of the Night bonuses with his submission victory over Michal Oleksiejczuk.

Here is a look at all of the results from Saturday night and the winners of the Performance of the Night bonuses:

There were six stoppage wins on the evening, but the most spectacular came from Priscila Cachoeira in the first fight of the night.

The tough and hard-punching Cachoeira dropped and finished Shana Dobson after landing this uppercut:

The win for Cachoeira snapped a three-fight losing streak and was her first with the UFC. Dobson might be getting her release papers soon.

She has dropped to 3-4 overall, 1-3 in the UFC, and has lost three in a row. At this point, she doesn’t appear to be on the level of the women in her division.

What Next For Tyson Fury, Following Shocking Deontay Wilder Knockout?

Who Can Tell These NASCAR Drivers Apart Anymore?

Important KPIs for Each Phase of the Customer...

In NFL Defensive Player Of The Year Candidate...

Microsoft’s Gaming Revenue Down Due To Hardware Sales...