Breaking
Increased Risk Of Chronic Conditions Associated With Early...
Top ETFs This Week As Dow Ends Day...
As Biden Admin Eyes Canceling Student Loans, Taxpayers...
How Social Media Is Helping Cryptocurrency Flourish
Here’s What You Need To Know About AstraZeneca’s...
Mini Gifts: What To Get For Your Colleagues...
Report: Biden Picks Janet Yellen For Treasury Secretary
Policy Priorities
How To Poise Your Business For Success (And...
Eight Key Steps To Landing Your Product In...
Brands That Are Redefining Black Friday
How Much Room Is There For E-Kick Scooter...
Why We Must Update The Law For The...
The Tax Rules For Home Businesses And Working...
How To Use The ‘E.R.I.C.’ Framework To Tackle...
Business Entity Types 101: Is It Time To...
Home Business UFC Fight Night 168 Stats And Video Highlights: Dan Hooker Tops Paul Felder In Exciting Scrap
Business 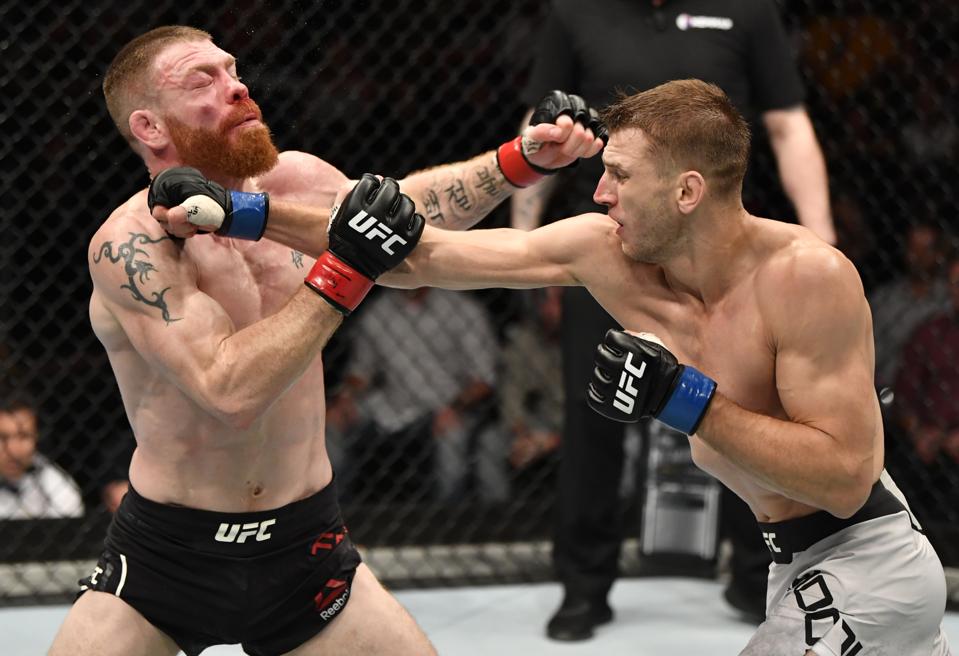 In what could be a “Fight of the Year” contender, Dan Hooker defeated Paul Felder in an incredibly close and incredibly exciting lightweight contest.

The seeds of this matchup were first sown a few years ago when Hooker called out Felder after he defeated Jim Miller. What made the callout interesting was that Felder was working commentary on that bout and he was interviewing Hooker inside the octagon at the time Hooker made that callout. Which, it should be noted was done in a respectful way.

Any good will Hooker had for Felder went out the window when the Philadelphia born fighter made a joke about Hooker’s last name after the matchup was announced.

That bad blood was obvious when the two met in the center of the octagon in Auckland and the New Zealander denied Felder a glove touch following instructions from referee Marc Goddard.

Good will or not, the fight was expected to be an all offense affair. Felder and Hooker delivered on those expectations.

Hooker started the fight looking to slow Felder with calf kicks and while he did land those kicks, he didn’t find much success in slowing Felder’s attack. However, Hooker did a good job in the early going in working from distance and keeping Felder from getting in close and tagging him.

Hooker’s strategy of working from outside of Felder’s range began to slip as his cardio wore down and the fight went deeper.

When the contest reached the championship rounds, Felder was wearing more damage, but he was also landing hard strikes that were catching Hooker, whose mouth was hanging open, flush to the head.

When the fight entered the final round it was hard to tell, which competitor had the advantage and the bout could have very well been tied.

Both fighters did their best to make a statement in the final round. It was Hooker who had the better statistical numbers in the final stanza landing 24 significant strikes as well as one takedown.

The judges scored the split decision in favor of Hooker.

After the bout, Hooker called for a matchup against Justin Gaethje, while Felder said he might retire to spend more time at home with his young daughter.

Hackers Are Hammering The Financial Sector With Login Attacks

Even With Blockchain-Friendly Advisors, President Submits Budget Without Support For The Tech