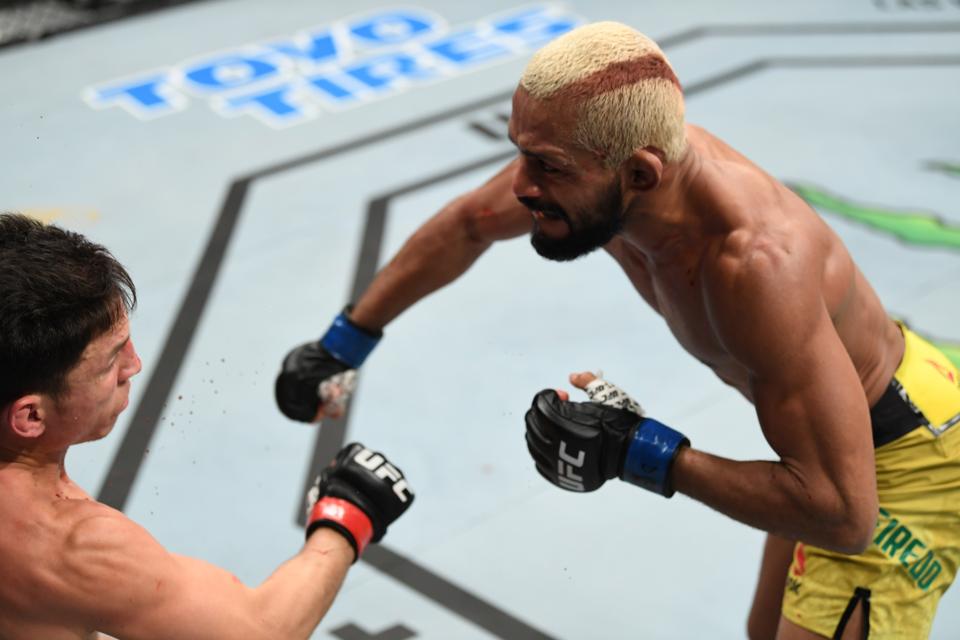 The UFC’s Flyweight division is in flux.

On Saturday night, Deiveson Figueiredo scored a second-round KO victory over Joseph Benavidez in a fight that was supposed to determine the winner of the vacant title.

Unfortunately, Figueiredo missed weight on Friday and was unable to win the title or collect on the bonus he almost certainly would have won for this nasty finish:

Just seconds before the KO, the two fighters’ heads came together for a clash, and it opened a nasty cut on Benavidez’s head. As he retreated, Figueiredo landed a massive right hand that dropped the former and led to the finish.

It was such a disappointing finish for Benavidez and in many ways for fans of the flyweight division. Because of Figueiredo’s win, the division still doesn’t have a champion.

Also, Benavidez is a beloved fighter who has toiled through some tough losses and injuries to get this opportunity. Unfortunately, he fell short in his third attempt to win the title.

Throughout the fight, Figueiredo was winning the stand-up exchanges and doing well fighting off takedown and clinch attempts. However, it’s difficult to give him full credit after he missed weight and benefited from an accidental headbutt.

Still, Figueiredo performed spectacularly against an elite opponent, and that shouldn’t be completely lost in the controversy. It’s unclear what the UFC will do to ultimately rectify the flyweight title picture.

Here is a look at all of the results and the bonuses from Norfolk, Virginia.

There is more than one way to break a body lock. Clearly, Spike Carlyle prefers to pound his way out of his opponent’s grip.

Carlyle pounded on Aalon Cruz as he tried to secure a takedown against the cage and it led to a brutal KO on the preliminary card.

Carlyle aka Alpha Ginger, was making his UFC debut, and based on the spirited finish, this won’t be the last we see of him. He took the fight on short notice and it will be interesting to see what he does with a full training camp. Carlyle didn’t win a bonus, but he might have been deserving.

Jordan Griffin With the Guillotine From Side Control

Traditionally, we don’t see guillotine submissions from side control, but that’s what Jordan Griffin did to score a technical submission win over TJ Brown and earn a POTN bonus.

It was a truly amazing maneuver from Griffin considering Brown had already secured 7 takedowns in the fight and was likely headed for a victory if the fight had gone to the cards.

Griffin was in desperate need of a win after losing his last two fights. He pulled out a big one with this victory.

At one point it appeared Tom Breese was headed for stardom. After Saturday’s loss to Brendan Allen, to say there are questions would be an understatement. Allen won the grappling exchanges and pounded Breese out on the ground.

Allen is a well-rounded fighter who was the latest to expose the holes in Breese’s game.

We’re not accustomed to seeing Megan Anderson getting stoppage wins in the UFC, but that’s exactly what she did on Saturday night. Anderson smashed her way through an overmatched Norma Dumont with a tremendous one-punch KO in the first round.

It’s unclear if a rematch with Felicia Spencer makes sense, but this was an impressive victory.

Despite COVID-19 Coronavirus, Here Is Why You Should Stop Buying Face Masks

There’s A Reason Why These Companies Are Top-Notch:...

Saturated Market? How To Stand Out In 2020