UFC On ESPN 7 Predictions And Picks: Is Aspen Ladd A Bantamweight? 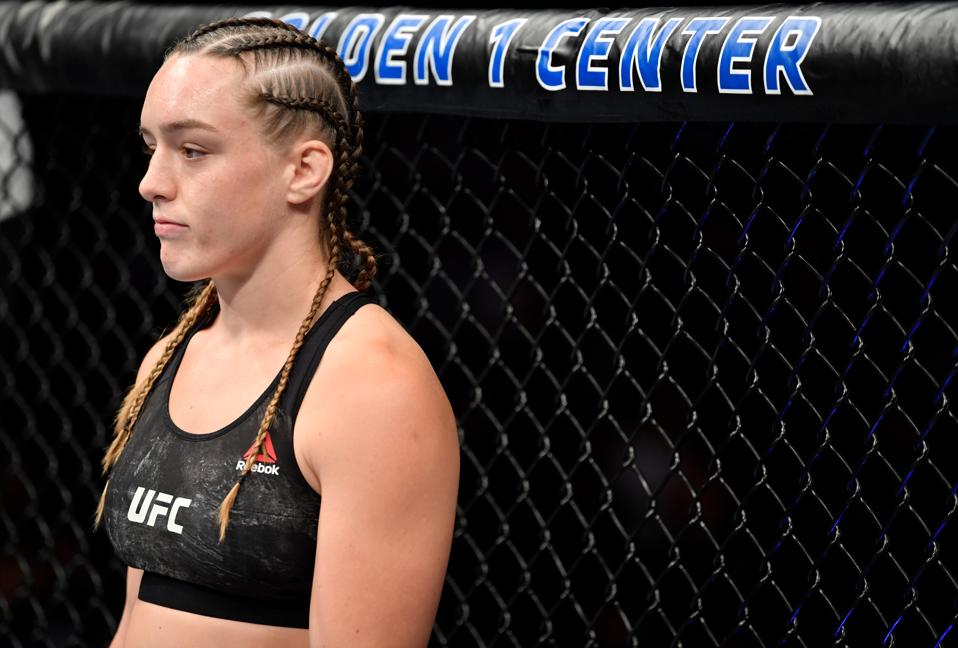 Things could not have gone worse for Aspen Ladd in July.

Ladd’s issues started on weigh-in day. Ladd visibly shook and grimaced when she stepped on the scale on the day of the fight. Her performance at the weigh-in was worrying. Things did not improve on fight night. Ladd gained 18 percent of her weight (24-pounds) back before the event, which resulted in the California State Athletic Commission (CSAC) handing down a suspension. That suspension stated that without “extensive medical documentation,” Ladd could not compete at 135 pounds.

As bad as things were before the fight, the bout went even worse for Ladd. De Randamie knocked her out in 16 seconds.

As a result of the loss, Ladd dropped to No. 5 in the rankings.

The De Randamie matchup was not the first time Ladd had issues with weight. In 2016, she came in 2.1 pounds heavy for a scrap with Jessica Hoy under the Invicta banner. In 2018, a bout against Leslie Smith was scratched when Ladd was 1.8 pounds over the 136-pound limit and Smith refused to accept a catchweight matchup.

Ladd’s suspension ended in October after Ladd weighed around 154 pounds six weeks out from her fight with Kunitskaya. With that, Ladd said she expected to have a more manageable weight cut heading into Saturday’s contest.

Ladd is a talented fighter and the hype that surrounds her is not empty. She does have the potential to become a champion at bantamweight, but if she once again struggles to hit the 136-pound mark, the UFC will need to consider forcing her to move to 145 pounds. At just 24, the damage she could be doing to her body while cutting to 135 pounds is something the promotion needs to consider seriously.

Flu Is Now Widespread In 10 States, Including California, Texas, Alabama

Why Climate Alarmism Hurts Us All

Advice To Women On Bridging the Retirement Savings...

The Infrastructure Stimulus – What Is Wrong With...

Party Or Not, Dak Prescott Is Behaving Foolishly...

The Family Soap Company That’s Cleaning Up In...