Breaking
4 Tips For Attracting Your First ‘Dream Client’...
Want To Generate More Sales This Holiday Season?...
Your ‘Harvest Moon’ Moment Is An Illusion: Why...
Google Meet’s Unlimited Calling Will Continue To Be...
The Need For Speed-Is Quantum Computing A Good...
Stock Market Crash: The End Game Approaches
Best Video Conferencing Software
House Democrats Debate Bill To Allow Student Loan...
For These Indigenous Artists “Land Back” Is Both...
The Current Tech Stock “Bubble” Reflects Pessimism, Not...
A Look At What’s Inside House Democrats’ New...
Page Authority 2.0: An Update on Testing and...
How Public Health Experts Are Harnessing The Power...
This Husband And Wife Built A Luxury Brand,...
This Husband & Wife Built A Luxury Brand,...
Luxury Footwear Brand Chelsea Paris Re-Launches And Stays...
Home Finance Ukraine’s Broken Government Scares Off Investors
Finance 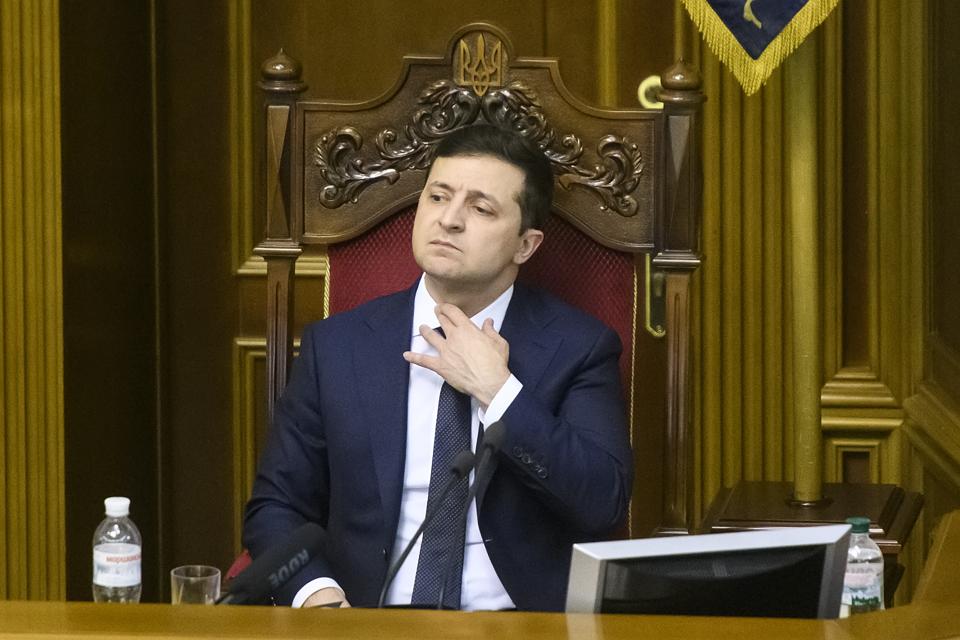 Ukrainian President Volodymyr Zelensky during an extraordinary session of Ukrainian Parliament in … [+] Kiev, Ukraine, March 4, 2020 after dumping almost all of his cabinet ministers. (Photo by Maxym Marusenko/NurPhoto via Getty Images)

It is not easy being the president. Being the president of a country that has a military conflict with Russia, and is the source of negative headlines in the U.S. on account of privately held energy firm Burisma makes it all the harder to paint Ukraine with a clean brush.

But paint he must. Volodymyr Zelenskiy, a former successful TV actor and producer, was entrusted with doing just that. Everyone is counting on him to wrestle Ukraine from the brink of what was, not too long ago, a failing state. Elected last year with 73% of the vote, now his popularity is hovering around 40%. It’s not great.

Foreign direct investment is in decline. The last reported numbers were $2.4 billion in 2018, down around 10% from the previous year. Kazakhstan has higher FDI than Ukraine. The 2019 economic growth disappointed.

Looked at from 30,000 feet, Ukraine’s debt burden dropped from 80% of GDP in 2016 to 52% today and inflation is around 4%. Interest rates have dropped over the last couple of years by around 700 basis points and are now at 11%. This is a growth killer. Ukraine’s economy is fragile.

Ukraine’s GDP grew 0.1% in the fourth quarter, slowing from a 0.6% in the third. It was the lowest growth rate since 2016. Last year, the Ukrainian economy grew 1.5% which is better than its new rival Russia, but below market forecasts of 2.3%.

“Investors were looking forward to 2020 with Zelenskiy. They all thought it would be a stable year of expansion. But all of a sudden, many of them are taking a second look at it and putting plans on hold.”

The good news for Zelenskiy is that he was not hired to bring an economic boom. Zelenskiy was hired to end the war with Russia and clean up politics as usual in Ukraine. Stories like Burisma are are fairly typical in Ukraine. Big business owners have carved out niches, like little feudal systems, and they have needed, historically, to be on the right side of politicians to keep their part of Ukraine in their hands.

It sets the table for political in-fighting and feudal battles between billionaire business owners well known to the West, from Dmitry Firtash, managing his natural gas and fertilizer empire in Ukraine from self-exile in Europe, to Ihor Kolomoisky who had a famous battle over his Privat Bank re-nationalization with the man Zelenskiy beat, Petro Poroshenko.

Burisma and Kolomoisky’s Ukrnafta are probably the best known battles in the U.S. But many cases involving Ukrainian’s business elite give foreign investors pause.

Two weeks ago, Zelenskiy fired the first Cabinet of his administration just six months after taking office. Prime Minister Oleksiy Honcharuk left his post and was replaced by the obscure regional governor Denys Shmyhal. Many senior members of the government also departed in the reshuffle, with new finance and foreign ministers hired.

“This was the first government where there was no high-level corruption,” Zelenskiy says, in case anyone was thinking they were corrupt somehow. “But not stealing is not enough. This was a government of new faces, but faces are not enough. New brains and new hearts are needed.”

“The government reshuffle couldn’t have come at a worse moment for Ukraine, with the coronavirus outbreak, a global market downturn, no IMF deal, secondary market bondholders becoming itchy, and significant sovereign debt repayments due. The key priorities of the new government should be to ensure macroeconomic stability…and boost foreign direct investment.”

To help that along, Ukraine watchers say that the country’s leaders need to convince foreign firms that it’s a safe country to invest in.

One of Ukraine’s biggest publicly traded companies, an iron ore company listed in London (FTSE 250), Ferrexpo (FXPO), is facing a court battle that stems back to a rivalry between the firm’s biggest shareholder and CEO, Kostyantin Zhevago, and Poroshenko, the former president who lost to Zelenskiy 24% to 73% and who is being investigated for corruption in his home country.

A Ukrainian court put a restriction on the sale of Ferrexpo’s Swiss unit. Zhevago was threatened by a man who was recently fired by the Parliament, Prosecutor General Ruslan Ryaboshapka, to be put on the international wanted list on alleged embezzlement at a lender formerly owned.

The Ukrainian mogul voluntarily stepped down as Ferrexpo’s top boss in October, but it didn’t matter much because his problems have impacted Ferrexpo. The London listed shares are down over 19% over the last four weeks, and down 55% in the last 12. This is one of Ukraine’s best companies. BlackRock, Norges Bank, Shroeders PLC and JPMC Assets Management are shareholders.

People close to Ferrexpo who could not be quoted on the record say the attack on Ferrexpo was inspired by the unprecedented move by politically motivated prosecutors to freeze assets and put pressure on Zhevago. The cause given was a bank named the Finance & Credit Bank owned by Zhevago, which was forced into bankruptcy by Poroshenko in 2015.

“Cases have been postponed many times due to the absence of state prosecutors, and in some cases even judges were absent for more than seven times,” Zhevago’s attorney Mikhail Ilyashev from Ilyashev & Partners said in an email on March 15. “You may consider it a deliberate attempt to deprive Mr. Zhevago of his access to justice,” he said.

“The oligarchs own all of the major television stations, and they sponsor loyal members of parliament in the Rada,” says Melinda Haring, deputy director of the Eurasia Center at The Atlantic Council. “Investors aren’t dumb. They’re not going to put serious cash into Ukraine until the country reforms its courts.”

Zhevago was the worlds youngest self-made billionaire and he is facing the notoriously opaque Ukrainian courts, for better or for worse. He made the Forbes billionaire list in 2007 together with Google founders Sergey Brin and Larry Page. That was the year he took Ferrexpo public on the London Stock Exchange main board. Ferrexpo now employs over 40,000 people directly and indirectly, and under Zhevago had reinvested close to $3 billion into the company.

Battles between oligarchs, of which Poroshenko certain was one – he is known as the “chocolate king” in Ukraine as he owns the Roshen chocolate company – are common. Zelenskiy’s administration is forced to deal with this.

Zelenskiy was exceeding the expectations of most Ukraine watchers until earlier this month when he sacked his prime minister, much of his cabinet, and his prosecutor general. 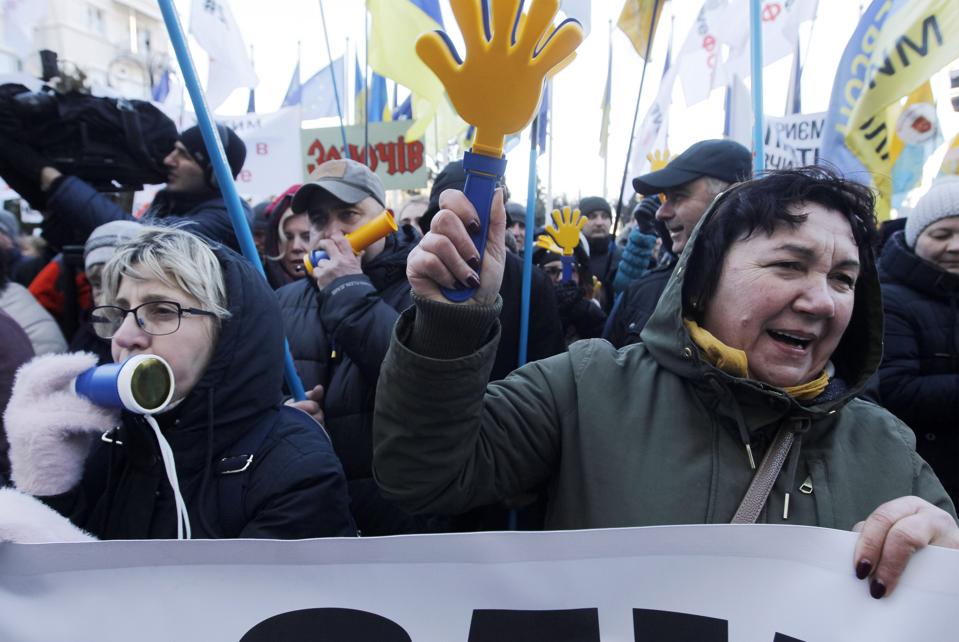 About a thousand private entrepreneurs gathered outside the Presidential Office in February, looking … [+] for fairer treatment in an economy dominated by state players. (Photo by Pavlo Gonchar/SOPA Images/LightRocket via Getty Images)

Prior to that, his team had pushed through some important but small reforms that made it easier to do business. His judicial reform was static, with some people suggesting the courts don’t want to budge and neither do the politicians because it’s the perfect weapon for coercion and control in Ukraine.

Some reforms were praised by foreign businesses. Parliament was expected to pass land reform and finish cleaning up the banks but it’s unclear if the Rada will pass either bill. If the Rada doesn’t pass the banking sector reform bill, it won’t get a new deal with the IMF.

Yes, Zelenskiy needs to confront the reality. Following his extraordinary victory in 2019 he is facing the choice between realpolitik and a new Ukraine, attractive for its people – and foreign investors. His drop in the polls shows people are losing confidence in him on delivering something new.

So for now, Ukraine is basically a portfolio investment for frontier market bond lords. But at a time when the world economy may be heading for a global recession if the coronavirus lasts much longer, Ukraine may be hung out to dry.

In a times of new challenges, when best western economies are being tested, Ukraine’s government and Zelenskiy will need to assure international financial institutions and investors that their actions and treatment of Western capital will not resemble the attack on American investor Michael Calvey by Russia and its courts, for instance, something that definitely spooked Wall Street and the private equity crowd in Manhattan last year.

Dealing with past rivalries of the Poroshenko administration may be the first step in getting on with Ukraine’s new life, which is exactly what Zelenskiy was elected to do.

Why The Tokyo Olympic Organizers Have Not Cancelled Or Moved The Olympics, And What Will Happen When They Do