Uncertain Future At Michigan State As Mark Dantonio Moves On 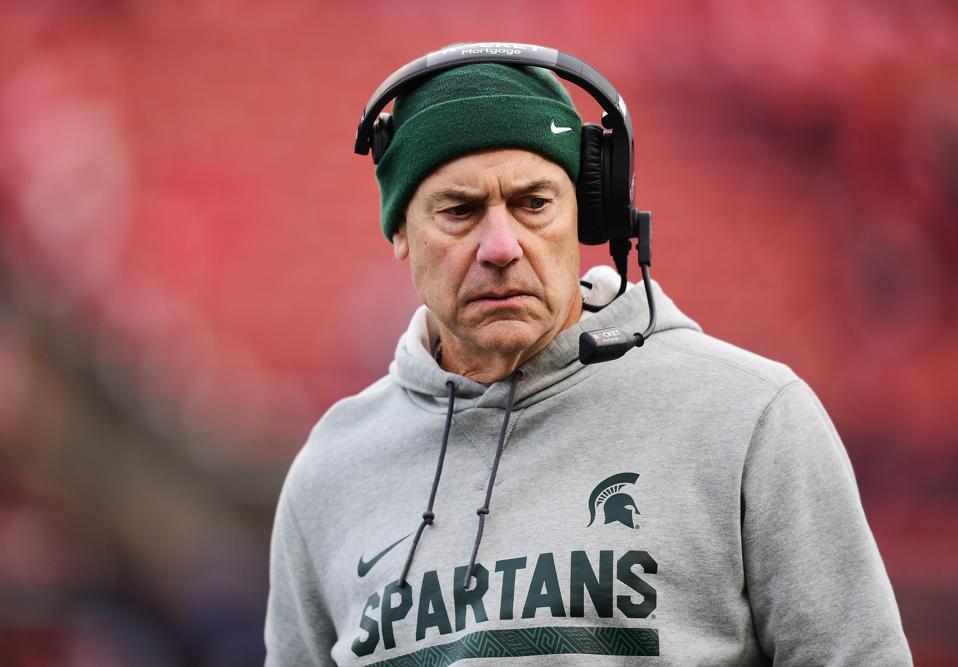 PISCATAWAY, NEW JERSEY – NOVEMBER 23: Michigan State Spartans head coach Mark Dantonio looks on … [+] during the second half of their game against the Rutgers Scarlet Knights at SHI Stadium on November 23, 2019 in Piscataway, New Jersey. (Photo by Emilee Chinn/Getty Images)

If there was any doubt about the uncertain future of Michigan State football in the post-Mark Dantonio era, Pat Narduzzi removed it this week.

After four bowl trips in his five seasons at the University of Pittsburgh, Narduzzi was an obvious leading candidate to replace his longtime mentor in the wake of Dantonio’s sudden retirement on the eve of national signing day. Instead of milking the situation, the 53-year-old Narduzzi quickly tried to end the speculation.

Wednesday night, he took to his Twitter account to post Leonardo DiCaprio’s famed “I’m not leaving!” speech from “The Wolf of Wall Street.” No doubt with some help from the social media crew at Pitt, Narduzzi’s post superimposed cutouts of his own face over DiCaprio’s.

But first, upon announcing a Panthers recruiting class ranked 44th in the nation by 247Sports — one spot behind Dantonio’s final haul – Narduzzi did all he could to avoid nuance in his first public comments on the Michigan State opening.

“The rumors – squash them, whatever you want to call it,” Narduzzi, who spent 11 seasons as Dantonio’s defensive coordinator at Cincinnati and Michigan State, told reporters. “I said, ‘I’ve got decisions to make too,’ and I’m here at Pitt and I want to be here at Pitt and that’s where I’m going to be.”

Yes, that’s the same Pitt that has gone a combined 36-29 during Narduzzi’s tenure. The Panthers do have 24 ACC wins in that span, trailing only Clemson and Miami among conference brethren, but under normal circumstances Narduzzi would have jumped at the opportunity to replace his former boss at a traditional Big Ten powerhouse.

Two former Dantonio associates, Luke Fickell of Cincinnati and Mel Tucker of Colorado, are expected to interview for the opening, according to the Detroit Free Press. San Francisco 49ers defensive coordinator Robert Saleh, who started out as an assistant in East Lansing, reportedly declined a chance to interview.

In this case, for all his denials about linkage, Dantonio seemed to be getting out of town one step ahead of the NCAA’s investigative posse. Hours before Dantonio faced the media for what he feebly tried to position as a “celebration” of his 13 seasons in East Lansing, which included three Big Ten titles and a school-record 114 wins, new details emerged about former staffer’s Curtis Blackwell’s wrongful termination lawsuit.

Blackwell, co-founder of Detroit’s Sound Mind Sound Body Sports Academy, had served on Dantonio’s staff from 2013 until his contract – at an annual salary of $129,000 — expired in May 2017. In a 6 ½-hour deposition last August, Blackwell reportedly accused Dantonio of multiple NCAA violations in addition to recruiting troubled four-star defensive end Auston Robertson despite the warnings of his Spartans assistant coaches.

Robertson was among four players in Michigan State’s 2016 recruiting class to be charged with sexual assault. Robertson, who played briefly as a freshman, had faced sexual misconduct allegations at Fort Wayne (Ind.) Wayne High School and had entered a pretrial diversionary program in March 2016.

“Given all the information available to us, we believe Auston should be provided with an opportunity to begin his education and playing career at Michigan State,” Dantonio said in a statement released March 30, 2016.

The following April, Robertson was dismissed from the team after being accused of rape. He later pleaded guilty to criminal sexual conduct and is serving up to 10 years in prison. 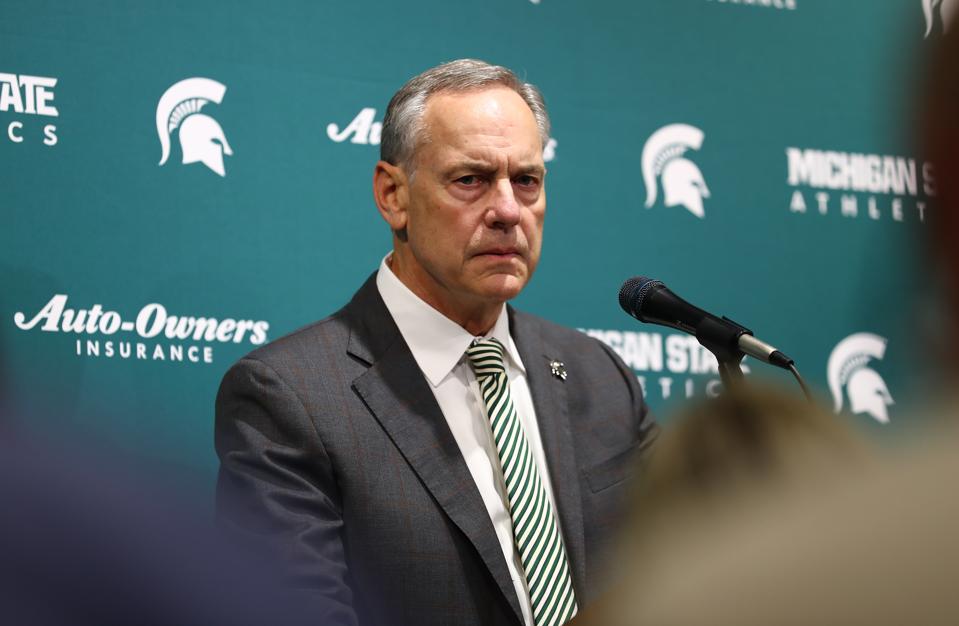 The Spartans, meanwhile, went 27-24 over the past four seasons, including consecutive losses by a combined score of 100-17 to top-10 foes Ohio State, Wisconsin and Penn State in 2019. Their decline from the highs of three Big Ten titles and a 2015 College Football Playoff appearance has been rapid.

Dantonio, who turns 64 in March and retired three weeks after collecting a $4.3 million retention bonus, batted away questions about Blackwell and Robertson at his news conference this week.

“We’re not talking about this here,” he said. “This is a celebration.”

Of what, it wasn’t exactly clear.

Mike Berardino is a freelance writer based in South Bend, Ind.

Banking on Veganism: Vegan Franchise Brands On The Up

What Bernie Sanders Isn’t Telling You About Social...

No, Trump Didn’t Say There Would Be Second...

Making Lemonade Out Of Lemons – How To...

Proposal: Cancel Student Loans In Bankruptcy Due To...