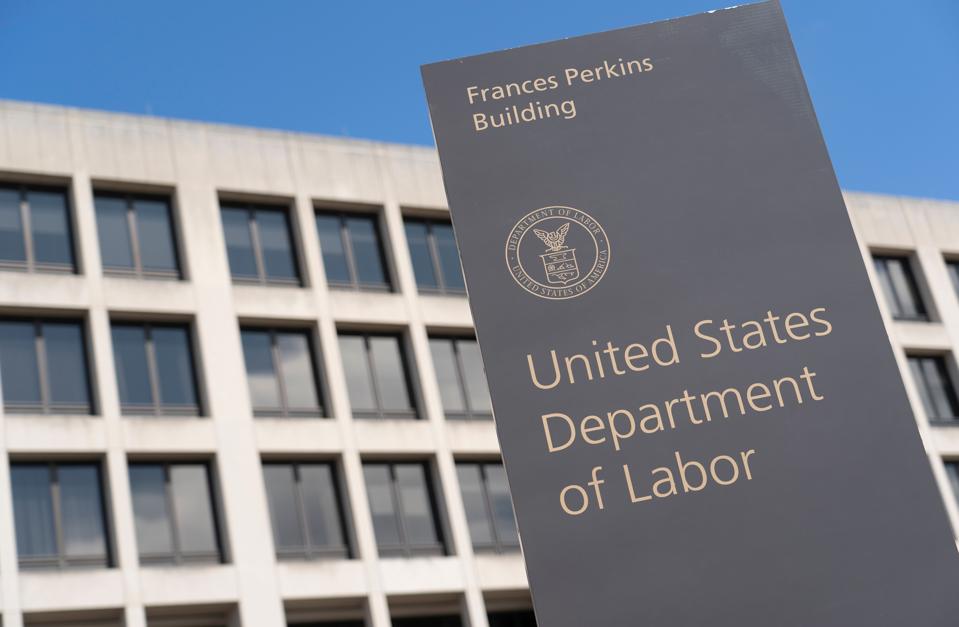 The US Department of Labor Building. (Photo by Alex Edelman / AFP) (Photo by ALEX EDELMAN/AFP via … [+] Getty Images)

Labor Department calculations of unemployment and job losses for the month just passed understate the nation’s economic pain by a long shot. According to the official report, non-farm payrolls last month fell 701,000 and the rate of unemployment rose from 3.5% of the workforce in February to 4.4%.  The actual figure is that closedowns and quarantines likely reduced payrolls nationwide by closer to 12 million.  After all, in the last two weeks of March alone more than 10 million applied for unemployment benefits, something for which not all the unemployed qualify. Since the workforce of the United States equals about 165 million people, those new claims at least added at least 7.5% to the existing numbers of unemployed, making the more likely unemployment rate conservatively closer to 11-12% at the end of March.  The figure will grow the longer the emergency constraints remain in place.

Lovers of conspiracies will naturally accuse the authorities of intentionally understating the economic pain. The impulse to think this way is understandable, but nonetheless misplaced. The real reason that the Labor Department missed the extent of Labor Force damage is that the calculation depends on a survey taken in the middle of each month. Actually, it comes from two surveys, one of households and the other of employers. The first asks a sample of the population whether they are working and if not whether they want to work.  Those working and out of work but seeking it give the Labor Department a fix on the size of the nation’s willing workforce. Those out of work but seeking it count as the unemployed, which the Labor Department states as a percent of the workforce. The second survey asks employers about the number of people on their payroll. Because the worst effects of the lockdowns and quarantines did not develop until late March, the Labor Department surveys simply missed most of the impact of the situation.

That will not be the case next month.  The surveys the officials will take in mid-April will capture the full brunt of what has already happened. These results will, however, mislead in a different way.  People will see a tremendous drop in payrolls that occurred in March but which the mid-month surveys missed. The report for April will also show a surge in unemployment, the bulk of which occurred in late March. Observers will have a natural tendency to believe that the sudden damage was done in April and will see an acceleration in Labor market damage that is far in excess of what is likely, though the damage will undoubtedly continue to become more severe.

It is a technical problem with statistical techniques that in most environments are more than up to the job set for them. But in this environment the misleading nature of these figures can have real world effects on perceptions of the state of the economy and on public as well as business confidence. A burden lies on the Labor Department and the administration to clarify the figures so that the public is not misled, one way this month and another in May when the responses to the April survey are released.

Corona Beer Production Suspended (But It’s Unrelated To Its Name)

Pontificating Politicians Plan To Outlaw The Engine, But...