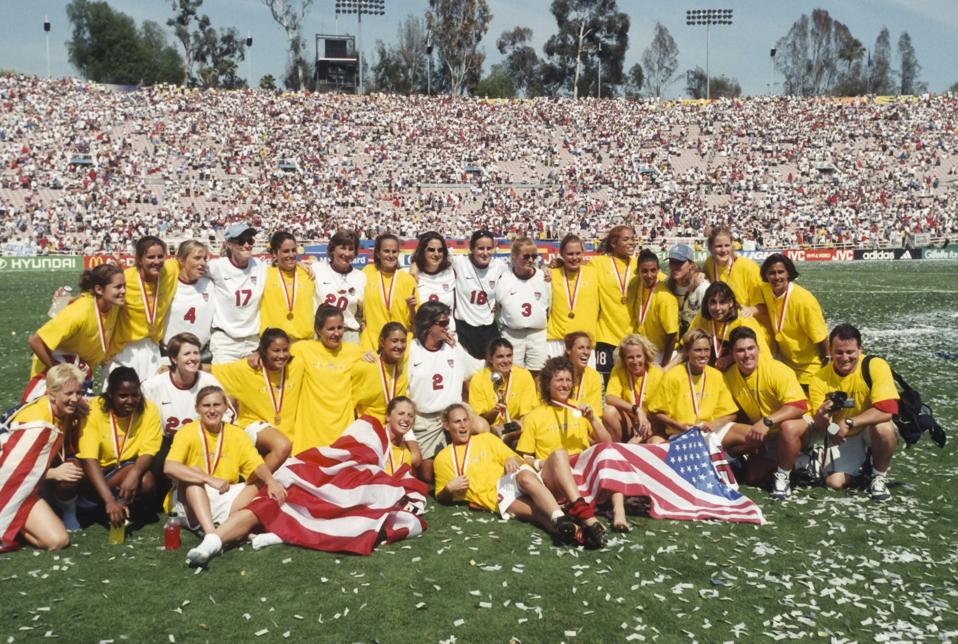 The 1999 United States FIFA Women’s World Cup winning team, the so-called “99ers” will be the subject of a feature film after Netflix NFLX yesterday secured the rights to Jeré Longman’s book “The Girls of Summer: The US Women’s Soccer Team and How It Changed The World”.

Netflix have assembled what they regard as “a stellar behind-the-scenes team” to tell the story of the team who won the World Cup on home soil watched by huge crowds around the country, culminating in a dramatic penalty shoot-out victory over China in front of a still world-record attendance for a women’s sporting event of 90,185 at the Pasadena Rose Bowl in California. 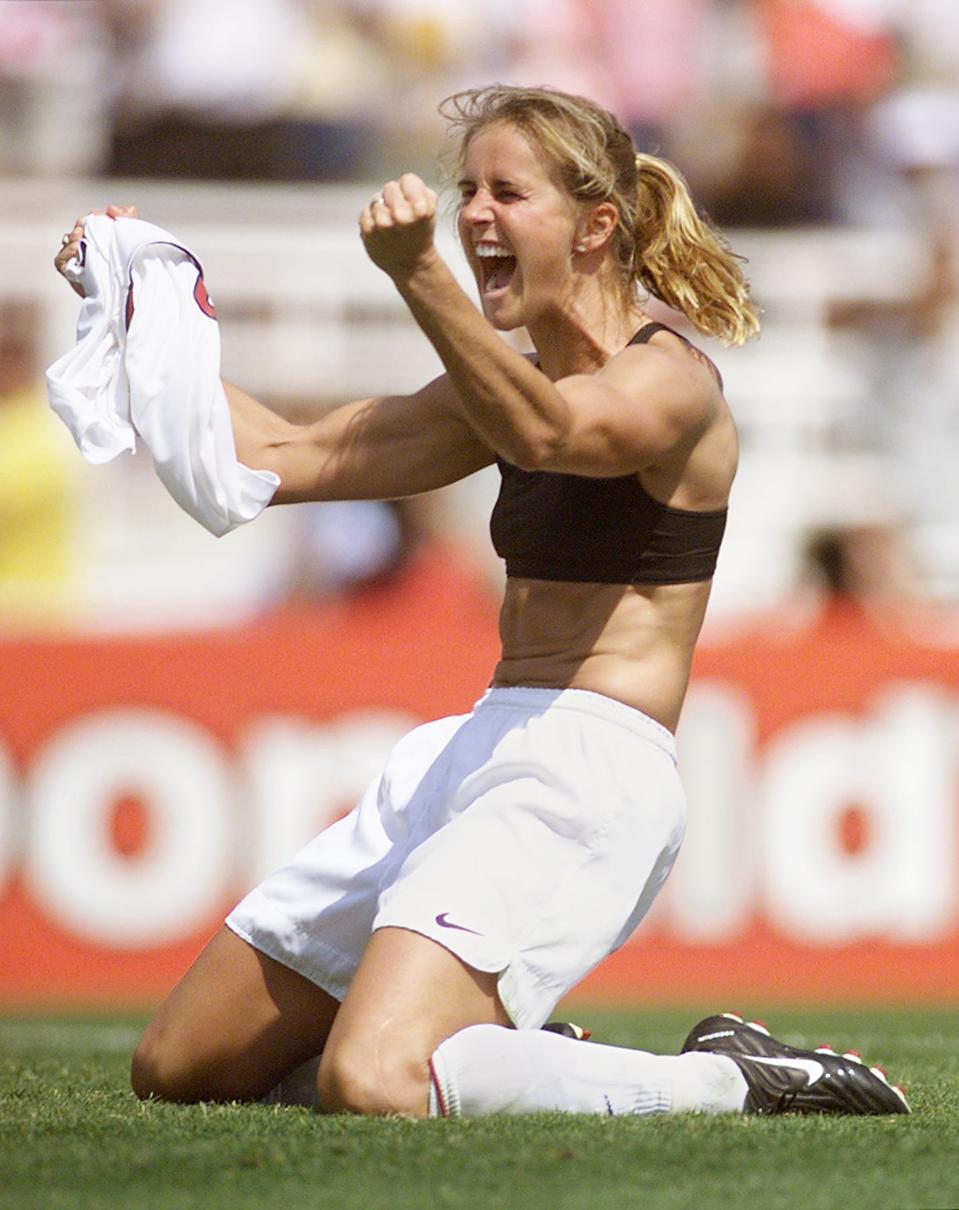 PASADENA, : Brandi Chastain of the US celebrates after kicking the winning penalty kick to win the … [+] 1999 Women’s World Cup final against China 10 July 1999 at the Rose Bowl in Pasadena. The US won 5-4 on penalties. (ELECTRONIC IMAGE) AFP PHOTO Roberto SCHMIDT (Photo credit should read ROBERTO SCHMIDT/AFP via Getty Images)

President of 3dot Productions, Liza Chasin, who previously worked on Mary Queen of Scots and The Darkest Hour, will produce the film alongside Hayley Stool who optioned the book and secured life rights to eight of the winning players. Julie Foudy, Mia Hamm, Michelle Akers, Joy Fawcett, Kristine Lilly, Brianna Scurry, Carla Overbeck and Brandi Chastain, who all started the 1999 final, featured in a promotion video released by Netflix yesterday. President and CEO of the 1999 FIFA Women’s World Cup, Marla Messing will also serve as an executive producer.

The 1999 squad were neither the first nor the last United States women’s team to win the World Cup. However the image of Brandi Chastain celebrating in her sports bra after scoring the winning penalty kick brought women’s soccer unprecedented headlines around the world and made the covers of Sports Illustrated, Time and Newsweek. Longman described it as the “most iconic photograph ever taken of a female athlete”. Last year, a statue was inaugurated outside the Rose Bowl to mark the 20th anniversary of the final. 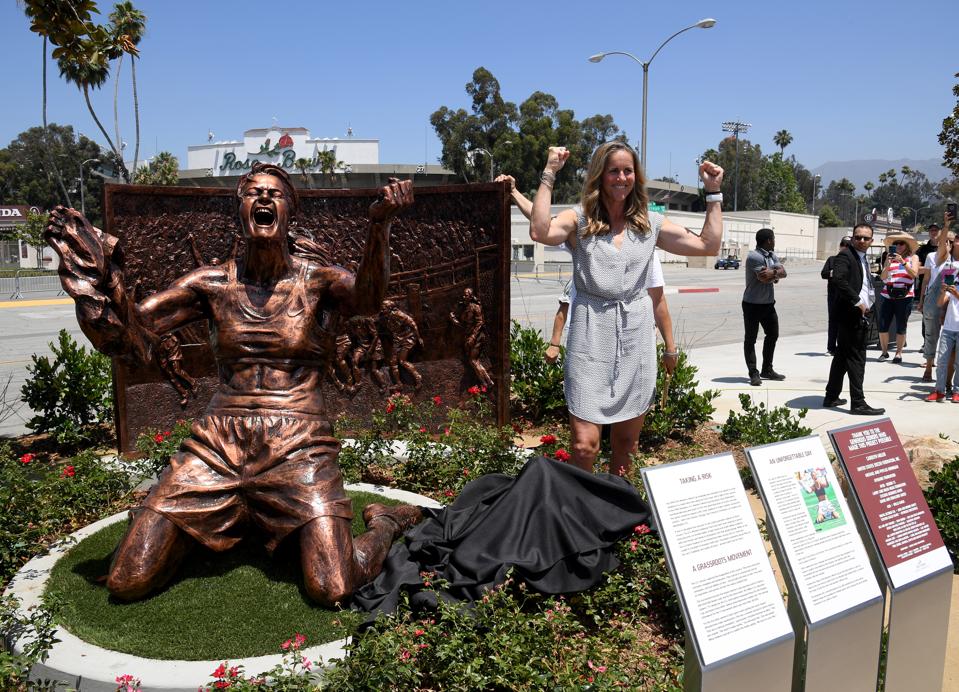 PASADENA, CALIFORNIA – JULY 10: Brandi Chastain poses with statue of herself during an unveiling … [+] of a statue honoring the United States win at 1999 Women’s World Cup on July 10, 2019 at the Rose Bowl in Pasadena, California. (Photo by Harry How/Getty Images)

An estimated 40 million Americans watched the final live on television including many of the current world champion team who cite the 99ers as their inspiration. Then aged 10, Alex Morgan grew up 20 minutes from the Rose Bowl, “they just were these badass group of women. I mean, I had never seen female athletes on TV in that way. Thinking about that gives me chills”. On the opposite side of the country in New York, a seven-year-old Crystal Dunn remembers the impact of the victory parades after the tournament. “Seeing Brandi Chastain with her photo plastered everywhere. They were just all around in the cities holding up their trophies and flags. Everyone flocked towards them. It was iconic for women’s soccer”.

Longman, an award winning sportswriter, released his book in 2000. In an intimate account of the team and its players he explored issues fundamental to women’s soccer, then and now, such as their importance as role models to women and girls, the significance of race and class in access to the game and the commercialization and sexualization of the players. In the book, he described the significance of the final like this “on this seething afternoon of July 10, women’s sport had reached its apotheosis after a century of forbidden participation, neglect, dismissal, grudging acceptance”.

Former Disney DIS Executive and current Vice President of Netflix Films, Tengo Nagenda moved to the United States as a teenager from Uganda. In a blog he spelled out his personal reasons for wanting to release the film. “Watching the USA team that summer made me forget I had no money and little more than a dream to feed me. That team, that goal, and Brandi Chastain’s unforgettable reaction – in which she ripped off her shirt and dropped to her knees in astonishment – made me believe I could do anything, and do it my way”.

“I can’t wait to get to work on this film and relive this staggering victory with our members around the world”.

English Housing Market Opens For Business, But How Will It Change Post COVID-19?