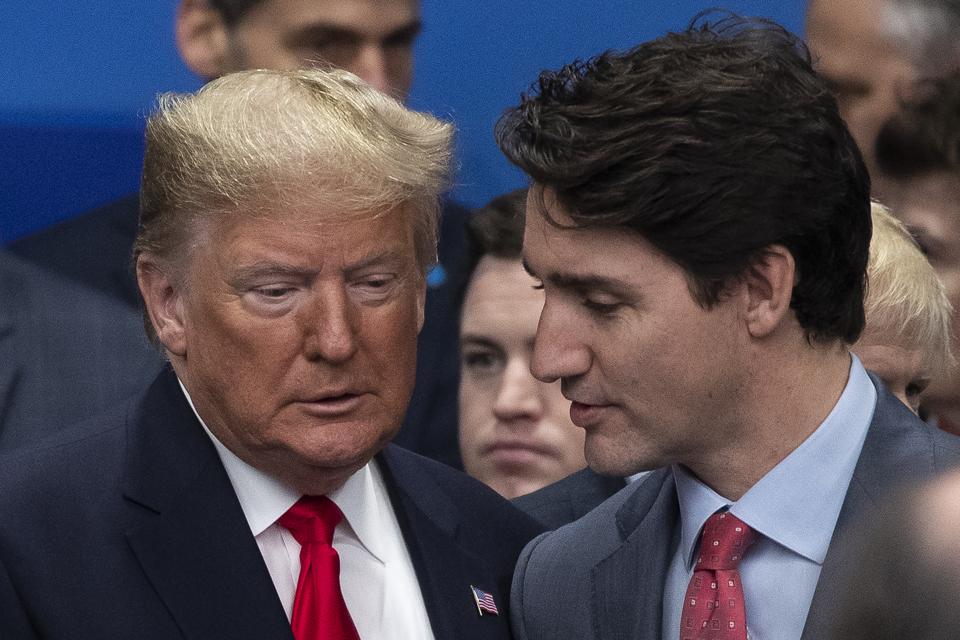 Only a few months ago, no one talked about safe distances and separation. Here, in December 2019, … [+] President Trump conferred with Canadian Prime Minister Justin Trudeau at the NATO summit in Watford, England.

The coronavirus-related travel restrictions announced Wednesday between Canada and the United States should have little impact on trade, due to the nature of those exports and imports.

The trade community, and the U.S. businesses and consumers who depend on that trade, took their big lump last week with President Trump’s surprise announcement limiting travel to most of Europe.

That’s because 49.84% of the $851.91 billion in 2019 U.S. trade with the European Union flew, with probably half of that flying in the “belly” of passenger aircraft and the remainder on freighters, or jet designed for or modified to handle cargo only.

Only belly cargo was directly affected by the restrictions, of course.

With Canada, almost all of the trade is via truck, rail, pipeline or vessel. In 2019, 5.44% of the $612.12 billion in U.S.-Canada trade flew. While it’s a fair assumption all of that was via passenger flights since freighters are generally used on long-haul routes, it’s still pretty insignificant as a percentage.

Next is Mexico, I am betting.

In fact, I would not be surprised if President Trump and Mexican President Lopez Obrador make an announcement limiting border crossings today or tomorrow.

Mexico will not pack the wallop of the U.S. restrictions on Europe travel, either.

In 2019, only 2.64% of the $614.50 billion in two-way trade between Mexico and the United States flew. As is the case with Canada, it would almost all certainly have flown on passenger flights, which have the advantage of being regularly scheduled departures.

The percentage was noticeably higher with U.S. exports flying to China, which accounted for 43.38% of total exports. In general, commodities fly when they are either higher-value, light weight or perishable.

Here’s What To Expect From The November Jobs...