Breaking
In Need Of A Competitive Edge? Look To...
Think Small: Timely Picks To Capture The Reawakening...
Patient Gets Covid-19 Swab Lodged In Her Lung...
Nine Signs You’re Not Being Effective During Your...
Chromebooks Can Now Run Windows 10 – Find...
Will Biden’s Tax/Benefit Plans Help/Hurt You And The...
This Fashion Brand Turned A Stripe Into A...
Shots In The Dark: Why Access To A...
What Building Wealth Really Takes In Business
Building A Circular Economy In New York City...
How To Cast Your Vote Against Election Scams
New Science On Stress: Feeling Your Feelings Works...
Why Now Is The Right Time To Acquire...
7 Obstacles That Prevent People From Starting Businesses...
Booking Holdings Falls; Likely To Remain A Risky...
Apple iPhone Crushes Samsung Galaxy In Important New...
Home Business USDA Finds Grocery Prices Rising At Highest Rate Since 2012
Business 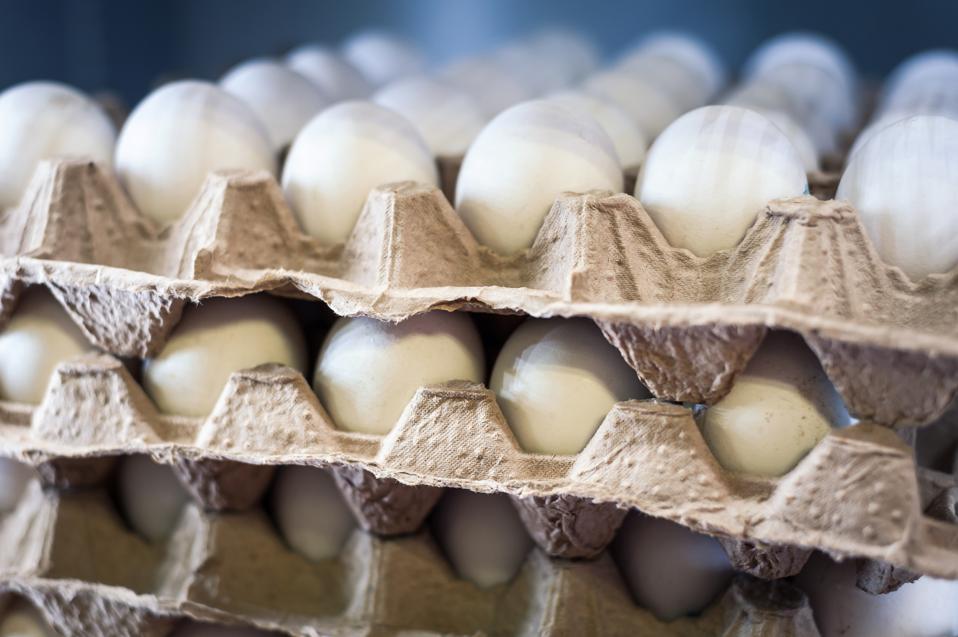 Egg prices have spiked 15% according to the USDA.

A monthly United States Department of Agriculture (USDA) report has shown that grocery prices are rising at their highest rate in eight years. According to the agency’s Food Price Outlook, overall grocery prices are going to be rising by 2.5%, double the previous estimate. Beef prices surged by 4.2% and poultry by 4.7% in April. Eggs had the largest increase of any group of foods at 15%.

The price hikes have coincided with orders by many states to shelter in place, shuttering most restaurants in those areas. This interrupts a current trend of families eating out versus staying at home. Given the large increase in food-at-home prices in April, the USDA expects the annual increase in food-at-home prices to rise dramatically as Americans are spending more money on groceries due to COVID-19. The crush of increased business created temporary shortages of dairy, pasta, soups and canned vegetables as foodmakers and distributors had to change production lines and shipping routes due to a logjam in the food supply chain.

“The closure of many meat-processing facilities has put upward pressure on retail meat prices despite abundant farm-level meat supplies,” said the agency’s report. “Despite high wholesale egg prices and strong demand in recent weeks, the table-egg layer flock is not expected to expand, which will keep upward pressure on prices.”

According to the report, an estimated 55.2¢ of the food dollar will be spent on food at home this year, compared to 54.8¢ before the coronavirus. The USDA raised its forecast of annual food inflation two weeks after the Bureau of Labor Statistics (BLS) said food-at-home prices were 2.6% higher in April. That is the largest monthly increase since February 1974. According to the Labor Department report, eggs also had the biggest increase, this time at 16%. The price of meat, poultry, fish and eggs jumped 4.3%, cereals and bakery products rose 2.9%, while fruits, vegetables and dairy goods all increased 1.5%.

The price hikes also come as the Department of Justice (DOJ) and USDA are investigating allegations that the meatpacking industry has been artificially manipulating prices amid the pandemic. With only four beef processors controlling 80% of the American market, such disruptions further exacerbate pre-existing disparities between the price of live cattle and the wholesale price of beef. According to Nielsen, the average unit price of fresh beef in retail rose 11.9% during the week ending May 9 compared to the same period last year.

In March, U.S. Senators called for investigations into record profits for beef processors like Cargill and Tyson Foods after ranchers complained that surging meat prices due to COVID-19 hoarding did not translate into higher cattle prices.

At the time of Grassley’s tweet, processors’ margins had leapt to more than $600 per head of cattle according to HedgersEdge.com.