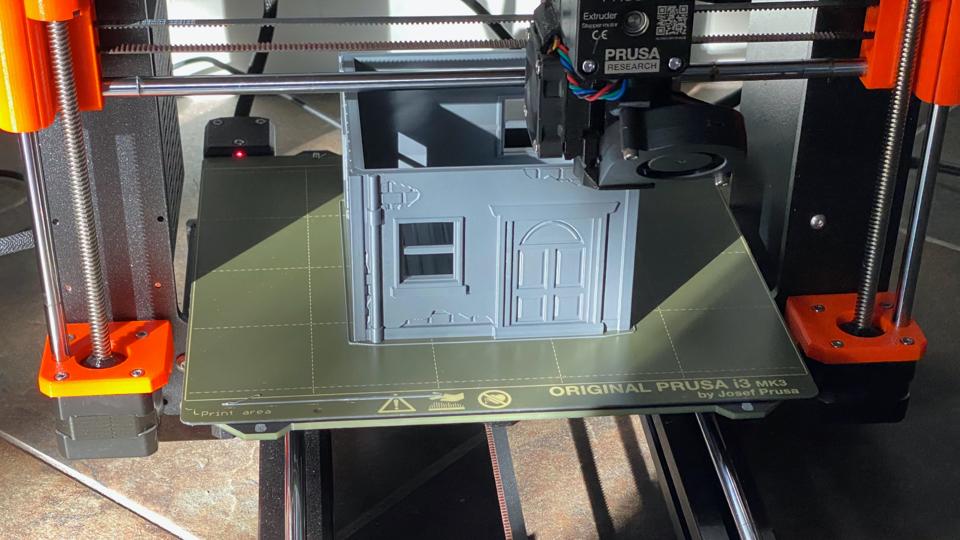 Wondering what to do now that you’ve got lots of time to spend at home? It’s the perfect opportunity to learn a new game and print yourself some fun accessories to go with it.

One of the things that drew me to 3D printing (and laser cutting) of all sorts is tabletop gaming. Anyone who’s cracked open a box recently knows that, while modern games are impressive endeavours, there are often things left out (since otherwise the game would cost hundreds of dollars). Components are printed cardboard pieces instead of miniatures or tokens. Box organization is usually “shove all the components and try to shut the lid.” Then there are those strategy war games that require complex terrain pieces that you have to purchase separately.

3D printing can take care of all of that. 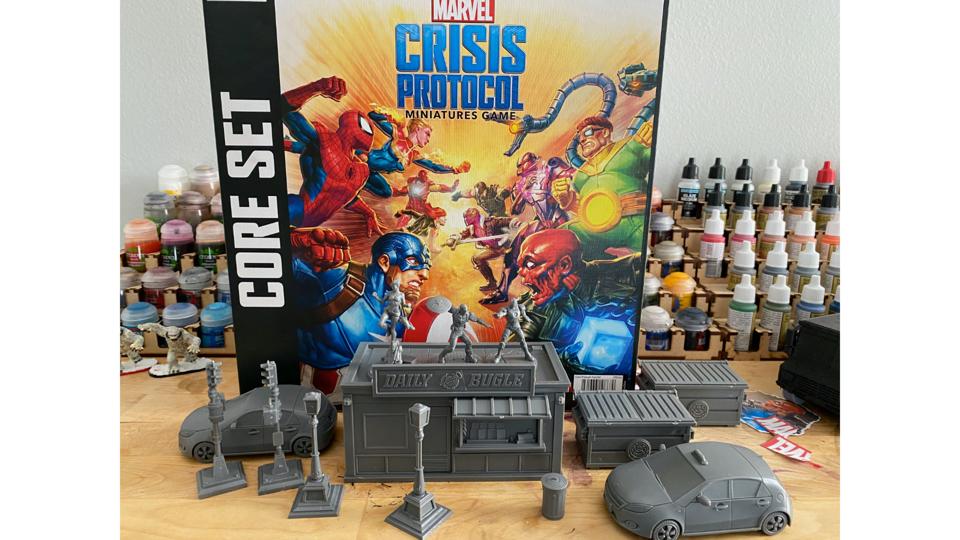 The Asmodee folks (you might remember them from my Ticket to Ride post) sent over a copy of one of the latest games in their stable: Marvel Crisis Protocol by Atomic Mass Games. It’s a fantastic squad combat game set in the Marvel universe that is, nevertheless, guilty of all the above.

As soon as I got the box and saw that there was no insert to store all the minis and landscape pieces once they were assembled, my mind immediately turned to when I was initially testing out my Prusa i3 MK3 printer back in November. I found plans online for a box insert for Star Wars: Rebellion. It took a while, but the custom-printed box insert radically changed how much easier it was to get the game to the table (like most Fantasy Flight Games it has a lot of components).

What about Marvel Crisis Protocol though? Since I’m no designer, and there aren’t Glowforge plans or 3D models available to print yet, I went with the much simpler (and more protective) foam box insert from Feldherr. I’ve used their products in the past to protect my Star Wars: Armada fleet and their soft foam inserts are well thought out and protect every component perfectly. 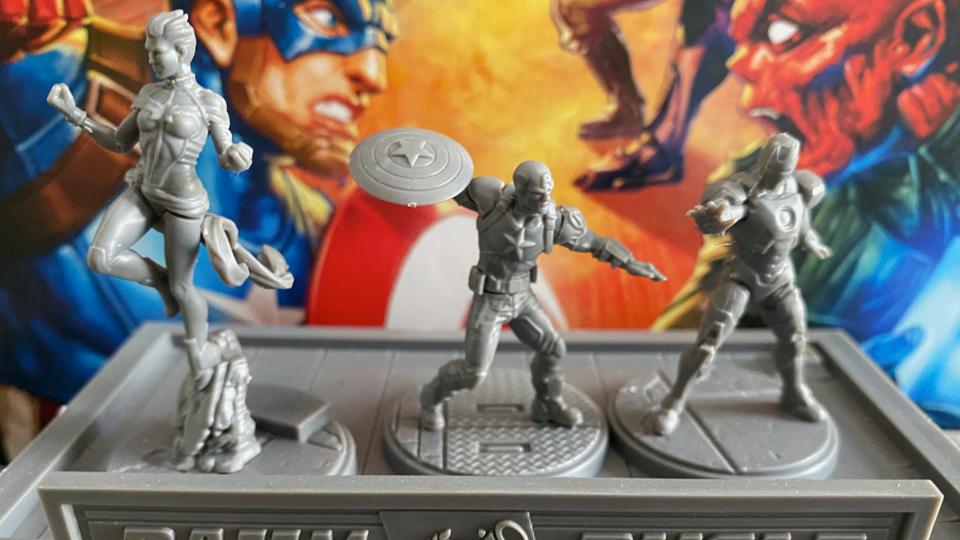 While I didn’t have a box insert to print, that didn’t mean I was done trying to find things to print for Marvel Crisis Protocol. If you’re not familiar with the game, it’s essentially a tactical miniature game, which means that terrain factors heavily into how you move your heroes and target villains.

The box comes with a newsstand, two cars, and a handful of traffic lights, trash cans, and dumpsters, but there’s no limit to the environment you can build to enhance gameplay. Want to build a city block? Want to build all of Manhattan? Go for it.

There are quite a few vendors out there that have digital files available for printing, but one of my favorites is Corvus Games Terrain. They’ve been creating printable 3D wargaming terrain for a while and already have a wide range of buildings and vehicles that can be scaled up to 28mm.

Since the release of Marvel Crisis Protocol, Corvus Games has added tons of new urban models to their catalog. There’s a brownstone apartment building that is broken into multiple floors so that the same model can be used for different heights. A donut shop can be printed so that you can recreate the only decent Iron Man 2 scene. There’s even an “Urban Mystical House” so that your Sorcerer Supreme has a place to call home. 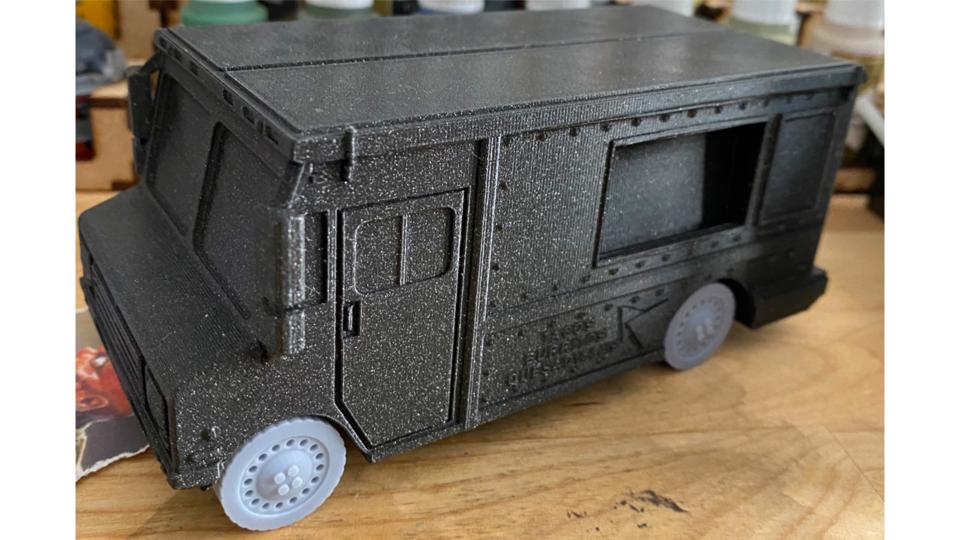 In addition to buildings, there are multiple vehicles to choose from as well. From city buses to dump trucks to (my favorite) a taco truck. What’s nice is that the files are regularly updated. Take the modular road tiles, for example. Originally developed to work with The Walking Dead and other post-apocalyptic games, they only came in cracked versions. They’ve since been updated to include non-cracked options. 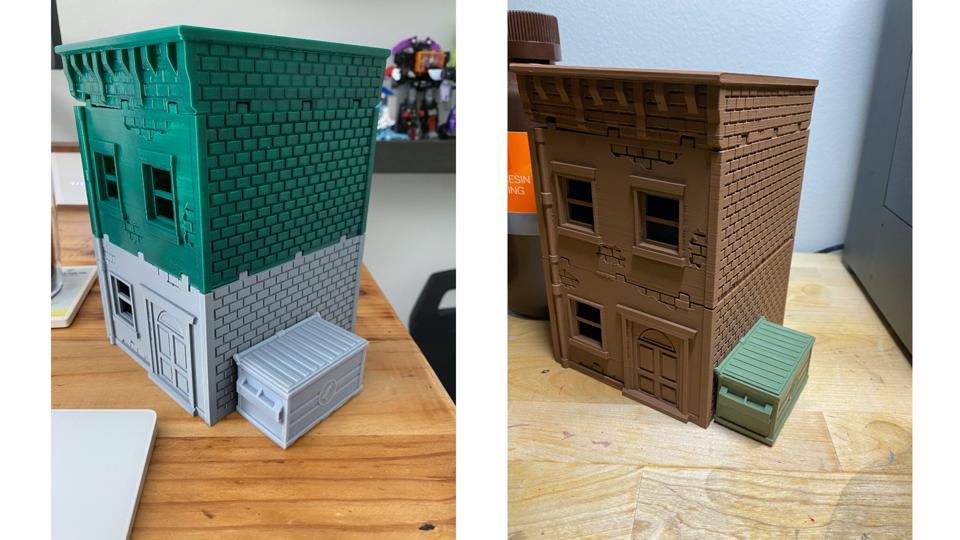 Whatever you choose, download the file and pick a slice of the model that will work for your printer (thankfully Corvus Games has each model broken down into parts to accomodate all sizes of printers). Then scale it up by 120% so that it’s in the 28mm miniature range. All you have to do then is start the print and let your printer do the rest.

For small things, like the pieces in the Urban Scatter pack, it won’t take long at all to print. For the larger buildings, it’ll take 12 hours or more for each section (depending on your printer, of course). Make sure you come back occasionally to make sure that the print is still proceeding as expected and that you haven’t ended up with a plastic tumbleweed on the end of your nozzle.

One of the only problems with printing large pieces of terrain is that it takes a considerable amount of time and material. Luckily, time seems to be something that we have in abundance right now.

Especially if you’re stuck at home for a couple of weeks, now is the perfect time to order the game, download some plans, and put your printer to work. It might take a few days to get everything printed, but before long you’ll have a city block worthy of your Marvel heroes.

Put Yourself In The Hard Boiled Sleeve Of...