Breaking
Expanding Your Business Into Spain: What You Need...
Essentials For Your Office Coming Out Of COVID-19
What Can Marketers Learn From Digital Cults?
Why NASA’s James Webb Space Telescope Will Never...
Increasing HR Effectivity and Efficiency through Software Solutions
The Difference Between Building A Startup In Bull...
Fluor Corp Ranked Among Today’s Top Shorts
Common Pitfalls to Look Out for When Buying...
Will the Olympics go ahead this year?
Pack Up the Big Top: Insights from MozCon...
Best WordPress Themes for Blogs
Get Ready To Rip And Tear, As The...
As Economy Recovers, Loan Approval Rates Increase For...
Lessons Learned—Avoiding The Fundraising Errors That Can Sink...
Top Tips to Help You Effectively Manage Your...
Malaysia’s Carsome, Tycoon Patrick Grove’s Catcha Group To...
Home Business Utah Jazz Center Rudy Gobert’s 2019-20 Season Review
Business 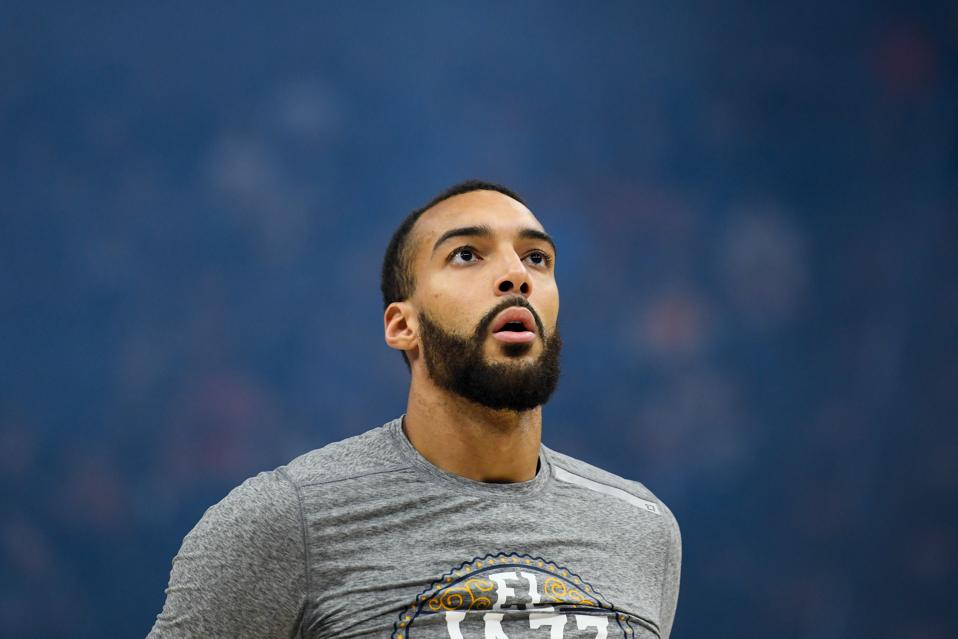 SALT LAKE CITY, UT – MARCH 09: Rudy Gobert #27 of the Utah Jazz looks on before a game against the … [+] Toronto Raptors at Vivint Smart Home Arena on March 9, 2020 in Salt Lake City, Utah. NOTE TO USER: User expressly acknowledges and agrees that, by downloading and/or using this photograph, user is consenting to the terms and conditions of the Getty Images License Agreement. (Photo by Alex Goodlett/Getty Images)

Utah Jazz center Rudy Gobert has been one of the NBA’s premier centers for nearly a half-decade, and he maintained his dominance through 2019-20.

Beyond his basic averages of 15.1 points, 13.7 rebounds and 2.0 blocks, Gobert finished near the top of the league (among players with at least 500 minutes) in a number of catch-all metrics.

If you sort every player in the NBA with at least 500 minutes by the average of their ranks in those six numbers (as well as the cumulative variants of each), Gobert comes in at No. 11. The Denver Nuggets’ Nikola Jokic is the only center ahead of him.

On defense, Gobert remains perhaps the most impactful player in the world. Utah allowed 6.6 fewer points per 100 possessions when he was on the floor. And he was once again more than the centerpiece of the Jazz’ defensive system. He was the system. In fact, Gobert, the two-time reigning Defensive Player of the Year, somehow took on even more responsibility on that end.

Without Derrick Favors filling the unique role he had with the Jazz last season, in which he started at the 4 and played the bulk of his minutes as a backup 5, Gobert had far more defensive lapses to try to cover. Donovan Mitchell, Mike Conley, Bojan Bogdanovic and even the typically stout Joe Ingles found themselves left in the dust on loads of drives this season. Gobert has long been Utah’s last line of defense, but he faced far more pressure there this season.

One of the most common sights in a Jazz game is an opposing guard or wing beating his individual defender on the perimeter before doing an about face upon seeing Gobert inside. Much like Stephen Curry has been a one-man offense for most of his career, Gobert has done that for Utah on the other end.

Offensively, he remains one of the game’s most underrated players. Gobert was top 60 in the league in offensive box plus/minus and fifth in true shooting percentage. And for the fifth season in a row, Utah actually scored more points per 100 possessions with Gobert on the floor.

“Rudy is our most important offensive player,” Utah general manager Dennis Lindsey told ESPN’s Tim MacMahon toward the end of the 2018-19 campaign. “Akin to the trigger on a gun.”

Gobert is one of the game’s best screen setters. He led the league with 5.9 screen assists per game last season. He tied with Domantas Sabonis for the lead there this season, with 7.0 per game. The Jazz, after finishing third last season, were first in possessions used by a pick-and-roll ball-handler in 2019-20.

That play is of paramount importance to the Jazz. And it helps to have one of the game’s best rim rollers, one who cares more about winning than shooting, as the screen-setter.

Gobert will always be known more for his defense, but his impact on the offense is massive, as well.

After making his second All-NBA team last season, Gobert has a strong argument for a third following 2019-20. Again, Jokic is the only center who the catch-all metrics love more. In terms of narrative, though (which is often more important), Gobert has a steep hill to climb. Joel Embiid, Bam Adebayo and Anthony Davis (depending on how he’s classified) all seemed to get more attention over the course of the season. And there may be some voter fatigue given Gobert’s two DPOY wins.

From a purely objective standpoint, Gobert was undoubtedly one of the NBA’s best centers in 2019-20.