Van Gundy Returning To Knicks? That Would Change Dolan Dynamic In New York 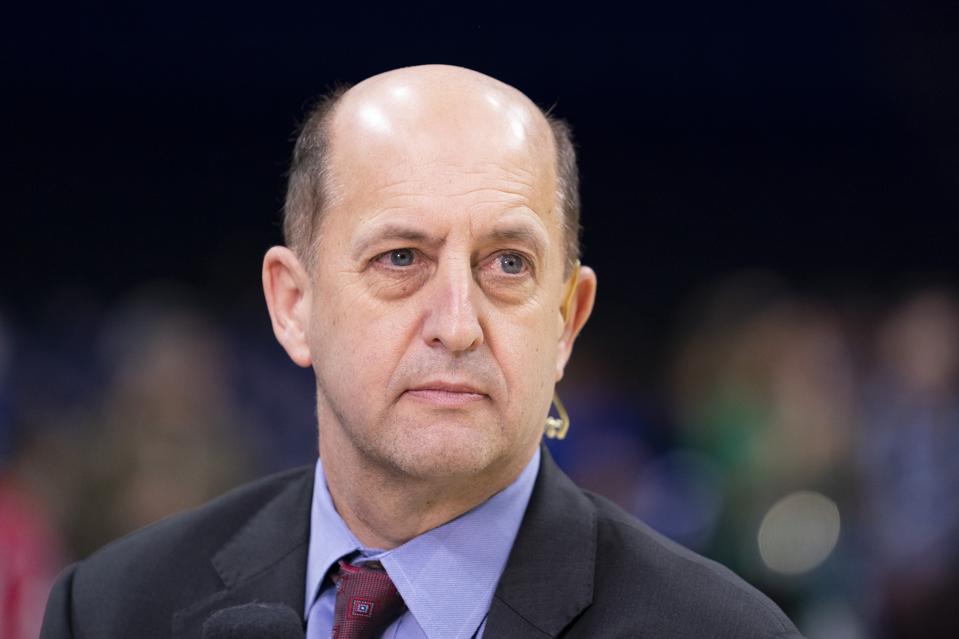 PHILADELPHIA, PA – DECEMBER 18: ESPN analyst Jeff Van Gundy looks on prior to the game between the … [+] Miami Heat and Philadelphia 76ers at the Wells Fargo Center on December 18, 2019 in Philadelphia, Pennsylvania. NOTE TO USER: User expressly acknowledges and agrees that, by downloading and/or using this photograph, user is consenting to the terms and conditions of the Getty Images License Agreement. (Photo by Mitchell Leff/Getty Images)

Jeff Van Gundy was the last coach to lead the Knicks to any quantifiable level of success. No, making the second round of the playoffs, as New York did in 2012-13 under Mike Woodson, doesn’t quite cut it.

So the news this morning that incoming Knicks executive Leon Rose wants to hire Van Gundy and Tom Thibodeau should be viewed as the best piece of news to greet Knicks fans in the better part of a decade.

If true, and Berman of the Post does not get things wrong, it could mark the beginning of a turnaround for owner James Dolan, who is as reviled in New York as any sports owner George Steinbrenner of the Yankees.

But remember one thing about Steinbrenner: He was beloved by the time be passed away.

Van Gundy is now the lead analyst for ESPN/ABC, but there was a time when he was an unknown — much like current Knicks coach Mike Miller — who made the utmost of the situation he was presented with. 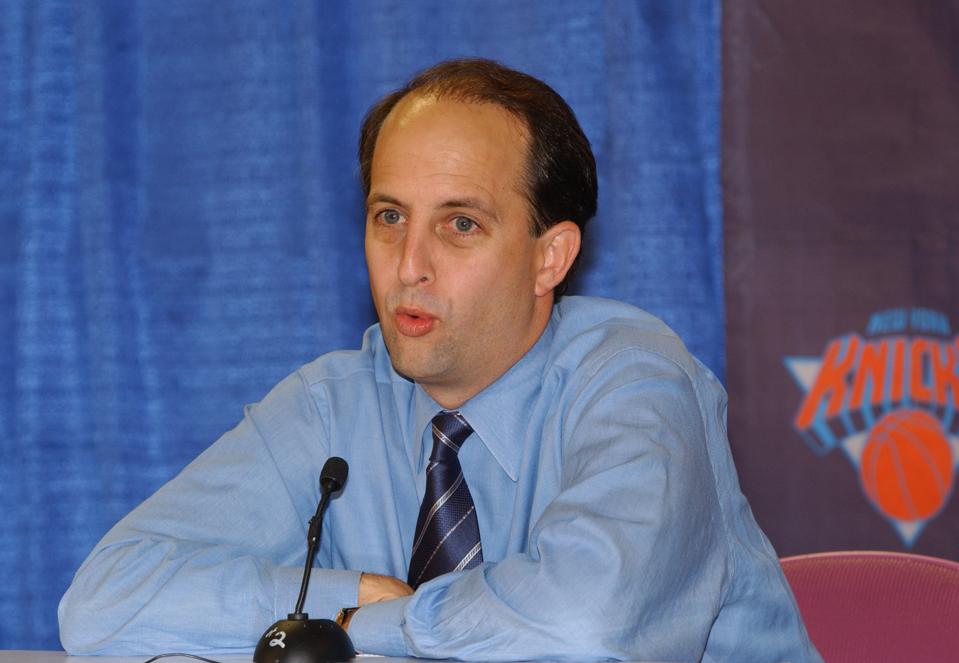 Jeff Van Gundy, head coach of the New York Knicks during Michael Jordan Returns to the NBA as a … [+] Player vs. The New York Knicks at Madison Square Garden in New York City, New York, United States. (Photo by KMazur/WireImage)

In 1998-99, Van Gundy took over for Don Nelson on an interim basis after Nelson wanted to trade Patrick Ewing to San Antonio for Vinny Del Negro and lost his locker room.

Van Gundy was given the job as a caretaker, and then-team president David Checketts set out to bring in coach Phil Jackson. Checketts went so far as to have a discussion with Jackson during the Eastern Conference playoffs, which created a bit of a sideshow as New York was defeating three consecutive opponents to reach the NBA Finals.

That overachievement earned Van Gundy the full-time job, and he went on to extraordinary success in New York and Houston before joining the broadcast booth and taking a side job coaching Team USA in World Cup qualifying.

Thibodeau, who was one of Van Gundy’s assistants, has been out of the coaching business since he was relieved of his duties as head coach of the Minnesota Timberwolves early last season. That came after the Jimmy Butler-Karl Anthony-Town fiasco, when the two stars had a fallout over a woman and could not occupy the same physical space. Wolves owner Glen Taylor was reportedly livid that Thibodeau let the situation fester over the summer, putting Minnesota at a disadvantage when it came time to trade Butler. 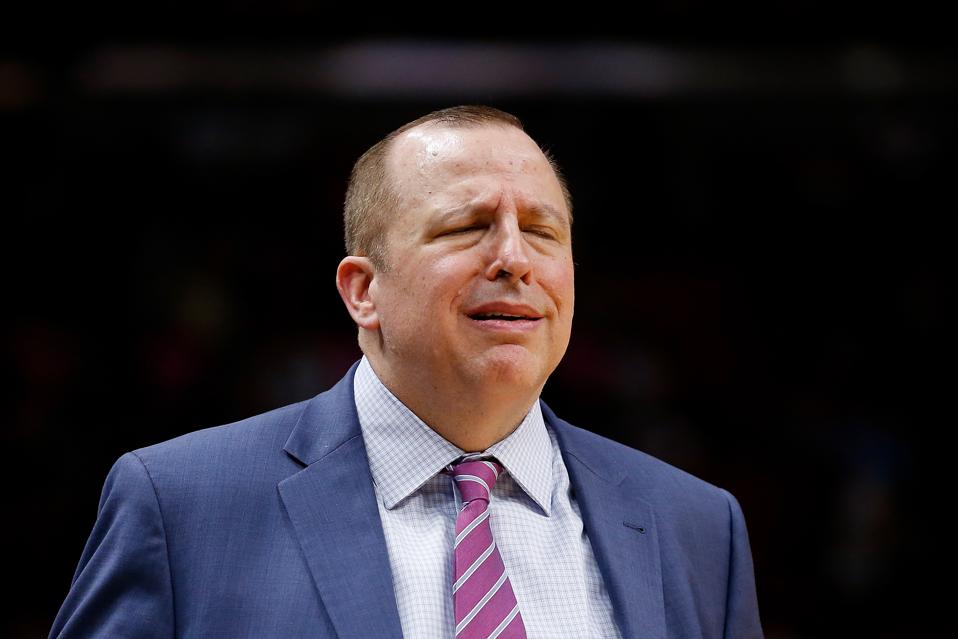 MIAMI, FL – DECEMBER 30: Head coach Tom Thibodeau of the Minnesota Timberwolves looks on against … [+] the Miami Heat at American Airlines Arena on December 30, 2018 in Miami, Florida. NOTE TO USER: User expressly acknowledges and agrees that, by downloading and or using this photograph, User is consenting to the terms and conditions of the Getty Images License Agreement. (Photo by Michael Reaves/Getty Images)

But Thibodeau, like Van Gundy, was a basketball lifer who did not fully appreciate how much one member of the female species could impact an NBA locker room.

It was believed that Van Gundy had burned his bridges with the Knicks organization after his abrupt departure during the 2001-02 season, when family concerns caused Van Gundy to resign with an 11-10 record.

But time heals all wounds, so it is said, and this development with Rose could mark the beginning of a turnaround for both the Knicks and Dolan.

There is a major portion of the Knicks fan base who will never stop chanting “Sell The Team” whenever the subject turns to Dolan. But that is simply not going to happen, as Dolan reiterated the day after removing Steve Mills as team president. 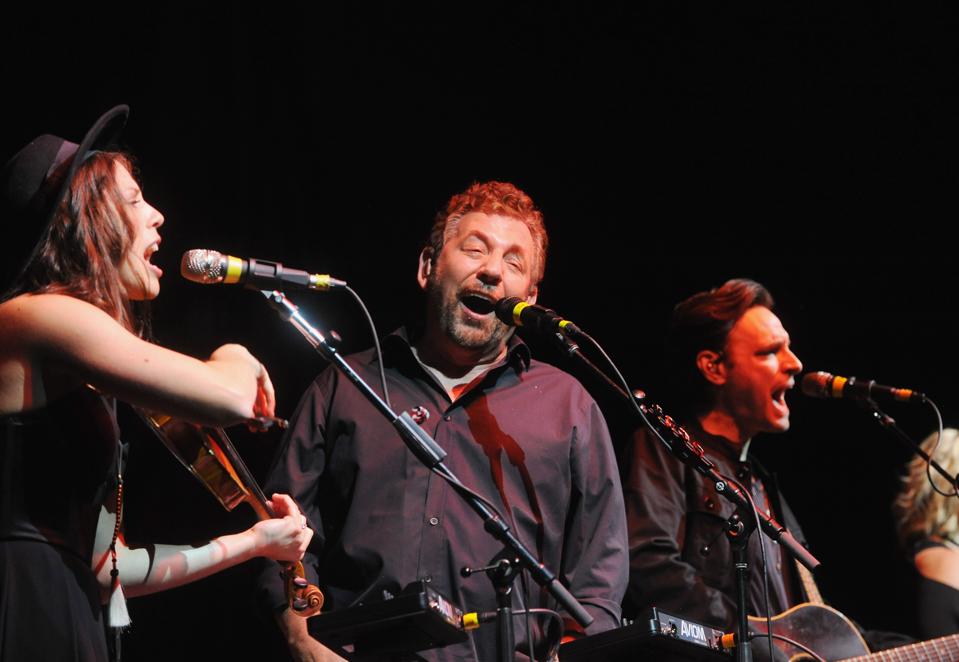 All Dolan can do from here is put the right person in charge and let that person make the proper changes, and bringing back Van Gundy would be the one move not involving player movement that would reinvigorate the fan base.

Master These Five Lines Of Effort To Achieve Startup Success

Busting A Sales Slump: How To Compete For Your Customers’ Mindstates

Friday’s Hearing Shows What May Be In Store...

Why The Global Economy Needs A Paris-Style Agreement...

You’ll Attend Your Next Trade Show From Your...