Breaking
Entrepreneurs Are Bringing Transparency To Home Buying And...
Best Incentive To Get Vaccinated: Money, Messaging, Or...
Page Level Query Analysis at Scale with Google...
How A CIO Can Align IT With Business...
Blogger of the Month: Jo, Girl Eats World
6 Things Women In Business Know That Men...
How to Use First-Party Data for Ad Personalization
Pressing Reset—Putting A Fallen Unicorn Back On Its...
How We Went Viral: Promoting Content with Influencers,...
Blame Olympic Record Price Tag For Return To...
Apple iOS 14.5 Release: Should You Upgrade?
How to Come up with Podcast Topics and...
Why Gaming Gear Company Razer Launched A $50...
Technical SEO Implementations to Increase the Impact of...
30 Brilliant Ways to Market Your Eco-Friendly Shopify...
15 Tech Industry Leaders Share Overused (And Misused)...
Home Finance Vanguard’s 2020 Stock Market Correction? Pure Nonsense, So Stay Bullish
Finance 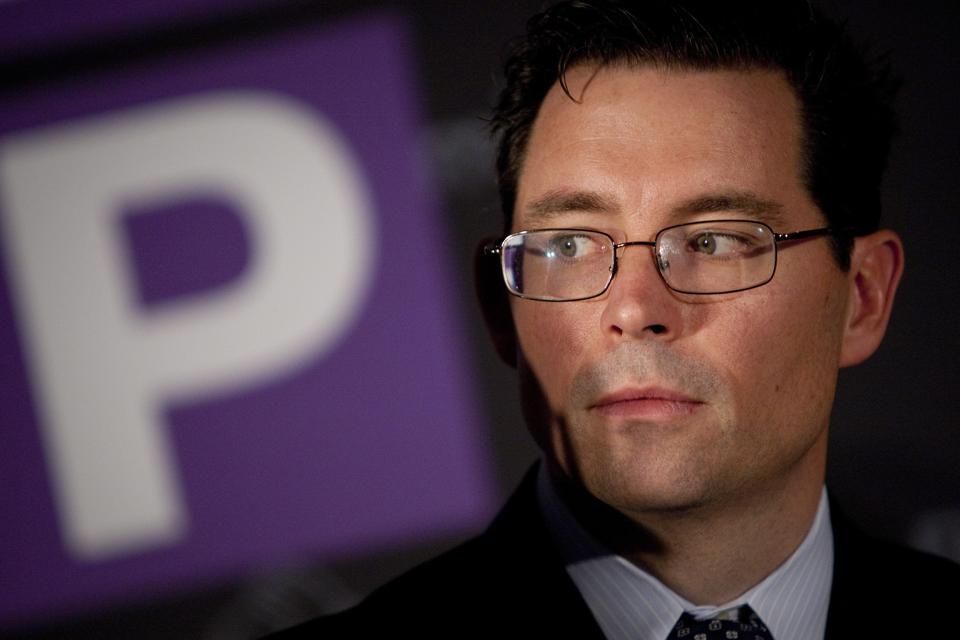 Vanguard Global Chief Economist Joe Davis rolled out a 50% probability “forecast” of a 2020 stock market correction. Instead of exhibiting wisdom, he simply reminds us of the old economist joke in action: “On the one hand, …, but on the other hand, ….”

While this flip-a-coin, 50/50 “forecast” should be laughable, it is a serious disservice to investors. He bases his conjecture on investors shifting from recession worries to reflation enthusiasm. So, just when is this excitement supposed to take place? More importantly, when will it top out? After all, it is from that point investors and the media will measure a correction. If the market rises 20% before dropping the 10% correction amount, we will miss out by selling now. Worse, what if the other 50% probability happens and the good news continues to lift the market further?

Or, most likely, what if that 50% guesstimate is simply a reaction to economists’ flawed recession forecasts? It’s a common result among those who forecast incorrectly — they either double down, believing the unexpected rising market is even at higher risk of a reversal, or they switch gears, changing the list of problematic issues that will cause the market to fall.

Bad statistical analysis where no relevance even exists

Then there is the comparison to show higher risk. Davis says that normally there is only a 30% chance of a correction. However, that number is unsupportable. In fact, even his suggestion that such a number exists is wrong. Any study of past stock market behavior shows that the there is neither a “normal” correction probability nor a link between corrections. (The graphs below will show how past data does not contain some magic vision of the future.)

Even worse, he points at volatility (VIX) as being “unsustainably low.” That is a ridiculous suggestion. Yes, the level of volatility will rise and fall over time, but it is a very short term measure that only shows what the market is doing at that particular moment. It has no relationship to what it will be doing. Yes, if a correction does occur, volatility will rise, but only at the same time – not in advance. Think of volatility as being like a plane’s altimeter, not radar.

What this forecast does signify: The stock market analytical approach is changing

This forecast shows the futility of the past analytical trend that now is dying: top down economy/investor/index analysis (versus bottom-up company, industry analysis). The generalized “stock market” view is appropriate when there is some general economic condition (e.g., recession) or investor attitude (e.g., the late 2018 emotional sell-off) at work. However, today, without such whole-market condition or attitude, analytical focus is on specific economic measures and the stock market’s components (sectors, industries and, most importantly, individual company stocks).

1. The annual returns for each year (previous year’s close to the current year’s close), with those down 10% or worse being labeled “corrections” 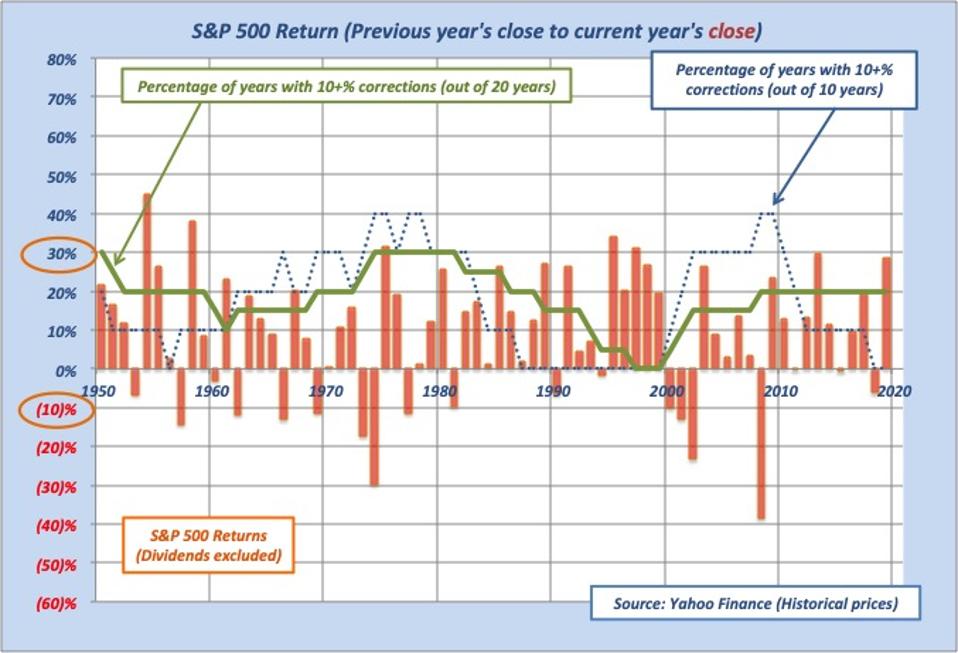 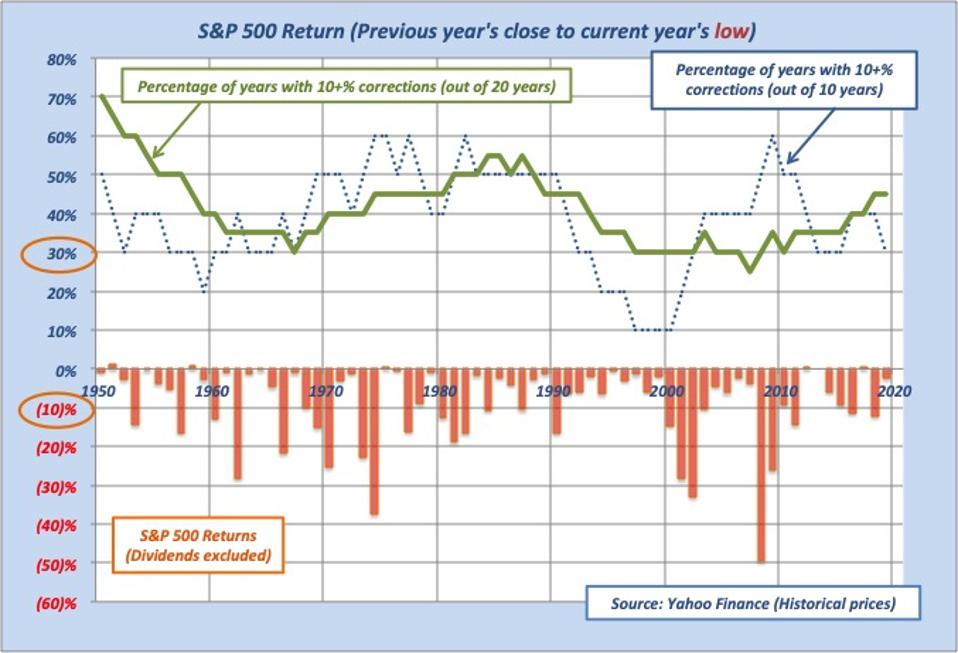 3. The same as #2, but moving ahead only month-by-month and calculating the lowest return over the next twelve months gets rid of the December forecast fixation 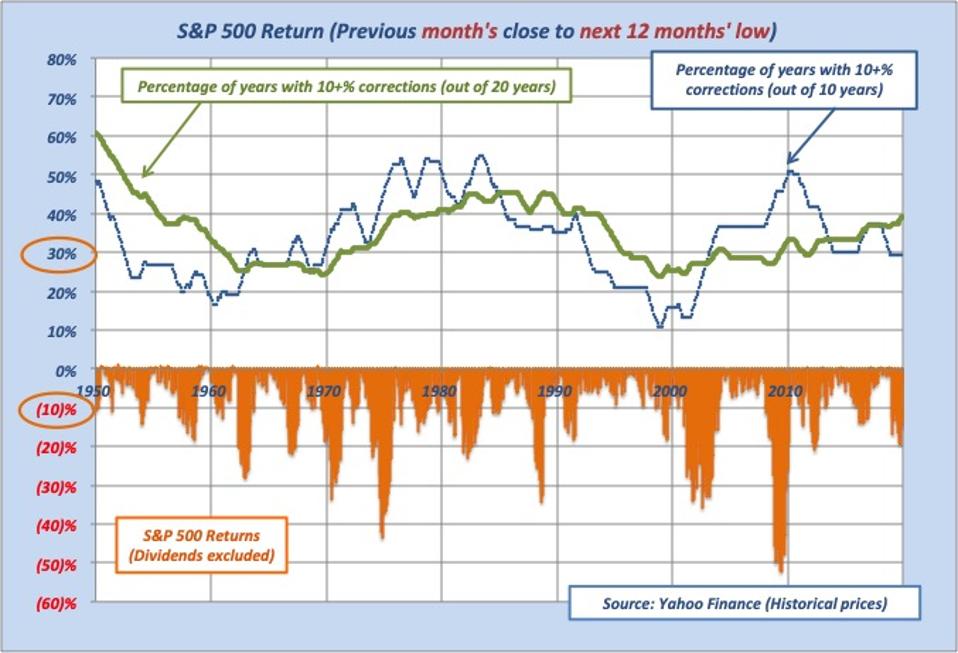 From those three series, we can see the percentage of occurrence is volatile and does not support Vanguard’s 30% normal statement.

Vanguard’s chief economist has made an unsound “50% stock market correction probability” forecast. For the reasons above, label it flawed and ignore it. However, the damage is done for many investors, who will decide to underweight stocks even as conditions continue to support gains ahead.

While that flawed advice helps other investors buy at attractive prices – and postpones any unhealthy over-optimism – it is a serious disservice to those who rely on such guidance.

Compared to previous market periods, today’s heavy flow of frightening and frothy investment articles makes an investor’s task all the harder. To then have a large, trusted investment firm start promoting sloppy analysis and worrisome, but baseless, scenarios is both misleading and detrimental.

For those of you in the investment advisory business, it is important to call out such misinformation. To succeed, investors must learn to navigate the investment world with a proper amount of caution and questioning, even of those they trust.

Is Holding onto DowDuPont and its Subsidiaries Still a Smart Move?