Breaking
Everything You Need to Know About Corporate Social...
Is Adaptive Leadership the Key to Motivating Employees?
Why business events are set to return with...
Business events set to return with a bang!
Expanding Internationally: 5 Things to Consider for eCommerce...
How the Machine Shop Is Going Digital in...
Sustainable Food Packaging Is Helping the Hospitality Sector...
Top 5 Investment Practices To Make More Money...
Managing IT Requirements for SMEs: 5 Aspects that...
How To Build a Successful Luxury Brand In...
Finding The Best Google AdWords Consultant for Your...
8 Top Tips To Help Your Agricultural Business...
Three Reasons Why Office Décor and Design Are...
Looking To Improve Efficiency In Your Business? Here’s...
AI and machine learning for business
How Social Media Changed the World
Home Business VanMoof S2 Electric Bicycle Review
Business 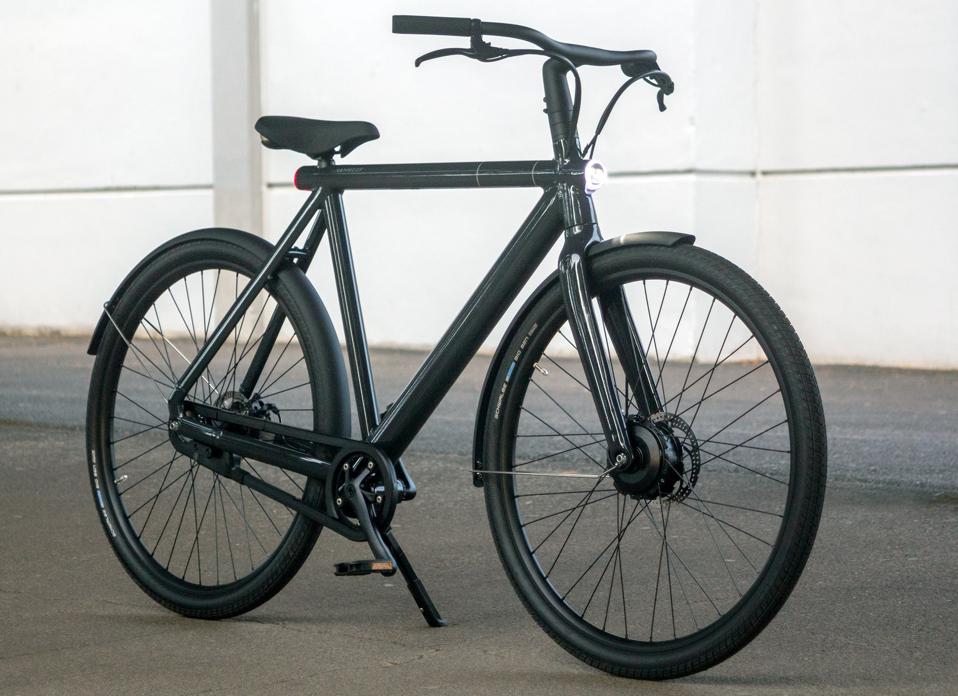 Uncluttered, concise and fun to ride, the VanMoof S2 is a different breed of ebike.

Earlier this year, a friend of mine took delivery of a Tesla Model 3, the “budget model” with almost no frills (he’s also a journalist) and he brought it by so we could take it on a shakedown cruise. Five minutes into my drive, cruising swiftly and quietly down the freeway on Autopilot, I got that funny feeling again, that same tingling I got in 2013 while driving a Tesla Model S for the first time: This is the future. This is what driving will be like for most people in about 20 years.

A few weeks later, a thunder gray VanMoof S2 electric bicycle arrived at my home, and five minutes into my first ride, I got that same feeling once again: I was getting another peek at the future of transportation, the way it’s meant to be, the way it will be for many people.

VanMoof has been on my ebike radar for years now, as I was initially struck by their design ethos and the cool, almost Bauhaus look of their bikes. Minimal. Functional. Smart. Clever, even. But with the S2 finally in hand, I was hoping against hope it wouldn’t be all show and no go. As I discovered, that depends on your definition of “go.”

I’ve ridden more ebikes than I can count, from the innovative to the outrageous, and I also own one (not a VanMoof) and ride it pretty much every day, year-round, as I commute and roam around bike-friendly Portland, Oregon. For several weeks, I put the VanMoof S2 to work, through rain, wind, sun and cold as Fall set in for the Great Northwest. 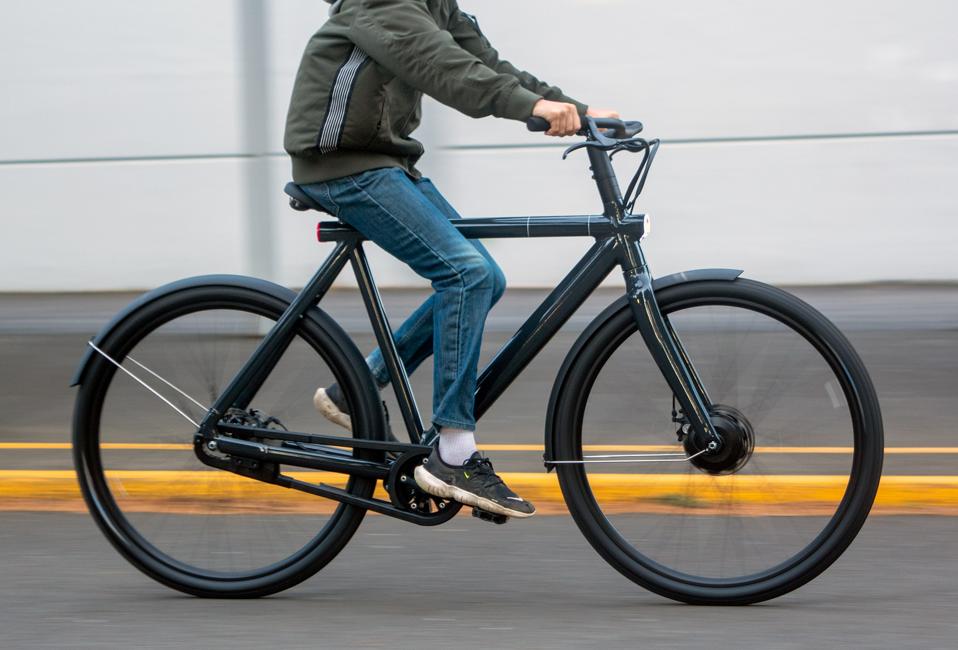 28-inch wheels smooth out the bumps. There’s no suspension, and the ride is taut is and precise.

Most electric bikes these days are a mash-up of traditional bicycling paradigms and new electric features, including frame design, batteries, motors and controls. While overall integration is getting better, it’s still pretty easy to spot an electric bicycle. Not so with the VanMoof S2. So well integrated are all the components, most people I showed it to didn’t even believe it was an electric bike until I could demonstrate it was. VanMoof’s signature frame design doesn’t seem able to hide a large battery, but it does, with a 504wH LG powercell lurking within the tubular frame pieces. It’s not user removable, but can be serviced if need be at a bike shop. And essentially, it’s invisible on the bike. 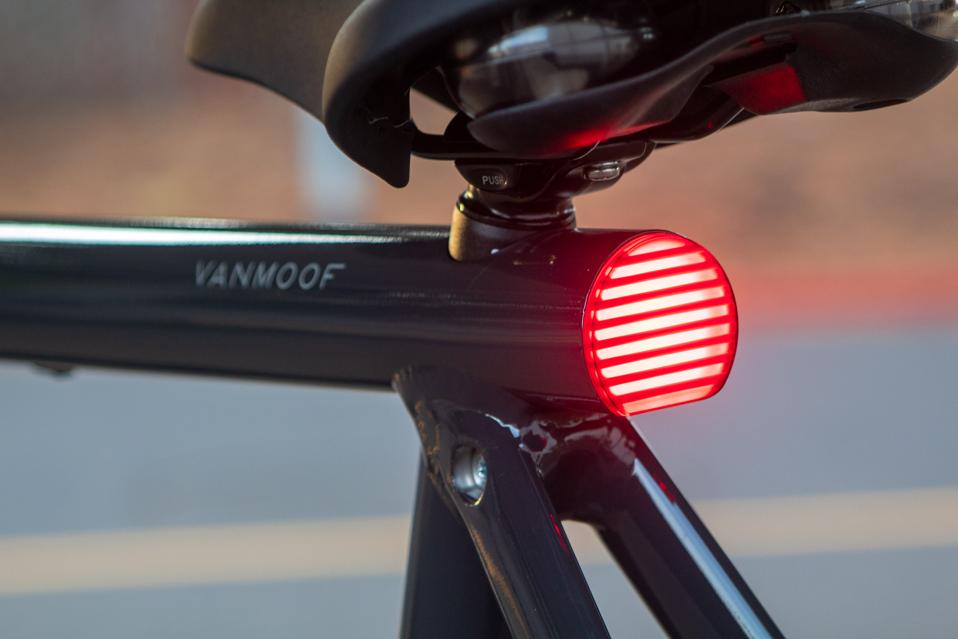 Like the bright LED headlight, the tail light is also built into the top frame tube.

Indeed, the invisibility of the electric bike components is a core principle with VanMoof. Where other bike makers might tack on a headlight, taillight and display panel, all those items are neatly integrated into the top frame tube of the S2, with the data panel being especially thoughtful as it consists of a matrix of 166 tiny LEDs that show speed, battery level and other statuses in an unobtrusive, innovative way that’s essentially invisible when off. 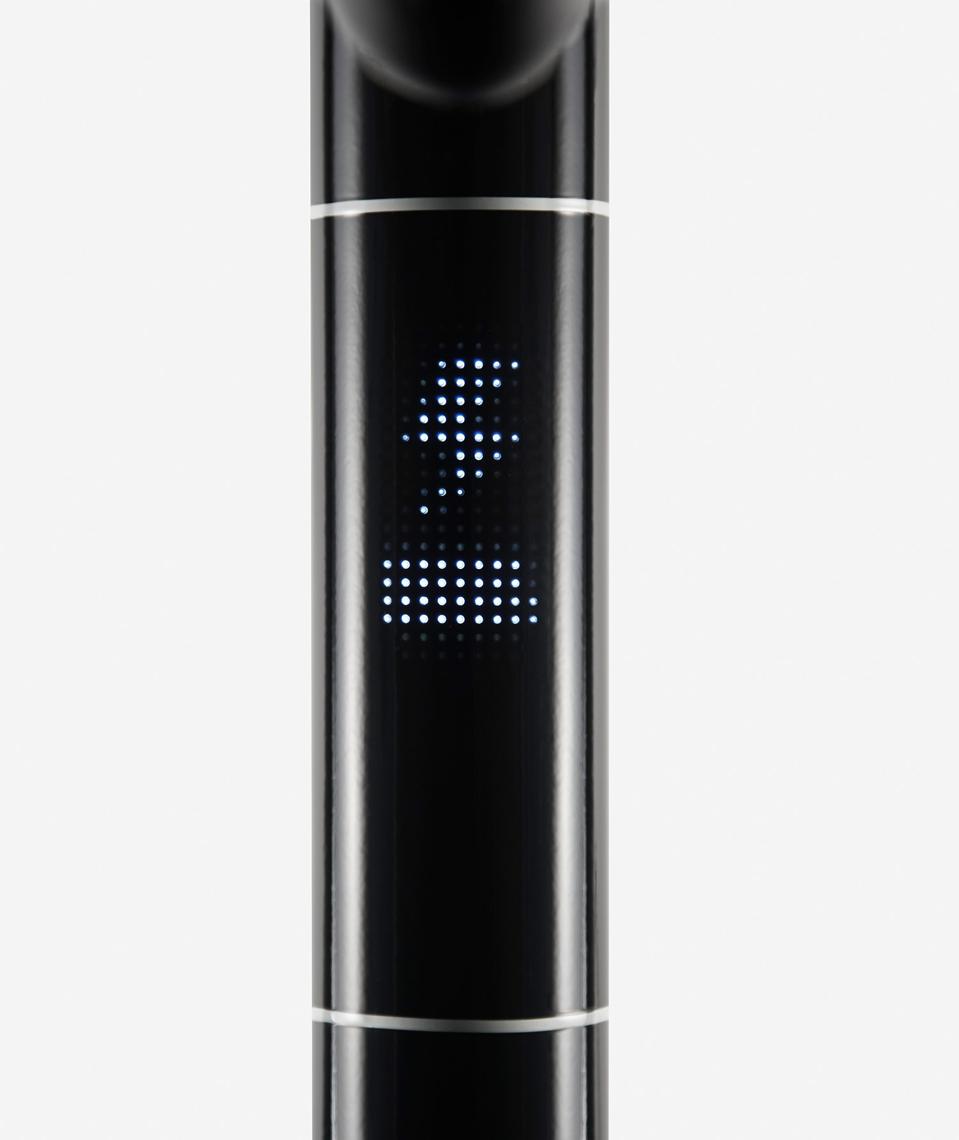 The discreet dot-matrix LED display showing the bike is charging, and nearly to full.

Adjusting parameters for performance (there are four power levels) and other variables is easily done on VanMoof’s intuitive smartphone app, which also can unlock the bike’s clever built-in rear wheel lock. Since the bike links to the phone via Bluetooth, the S2 also knows (like a Tesla) when you are approaching and will “prep” the bike by turning on the lights and making a welcoming “wake up” noise. It’s pretty slick to see it all happen, like it’s from the future…

And while other electric bikes use familiar shifters, buttons and bells, which can often mean a cluttered handlebar, the S2 is more like the driver’s area in Tesla cars: There are just two unlabeled buttons on the swept-back handlebars, and just two short cables from the brake levers that enter the frame and disappear. 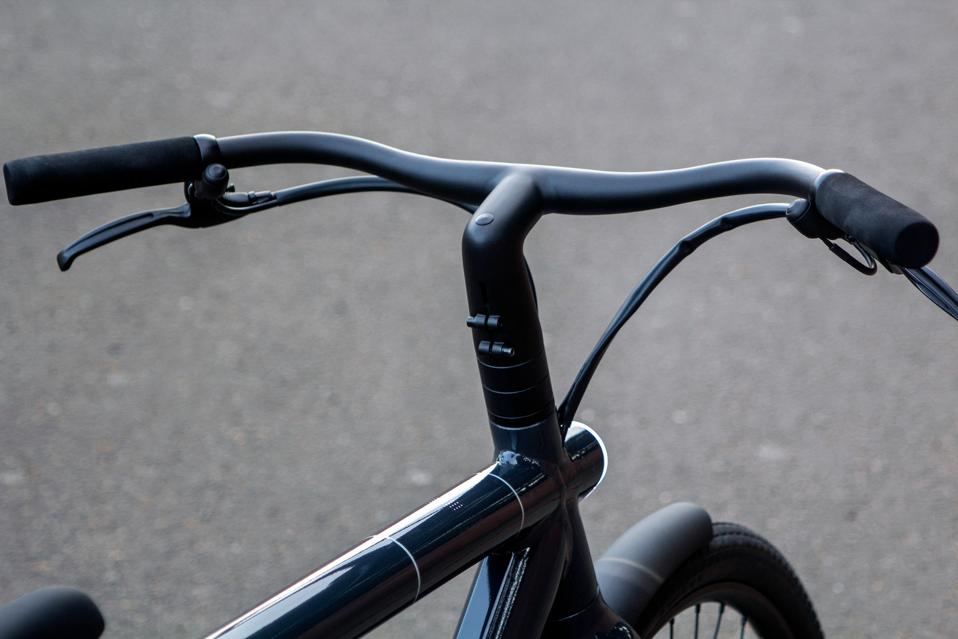 It looks like a handlebar from yesteryear, but the S2 has two discreet buttons right where your … [+] thumbs land.

The design is so clean it’s striking – and refreshing. The left button rings the bike’s electronic bell from a built-in (but invisible) speaker, and it’s both loud and distinctive. The button can also unlock the bike and make other adjustments. The right button sends maximum power to the front motor in a sort of “boost” function, but it is it not a throttle – this is a Class 1 bike that will only add power while you are pedaling – there’s no freewheeling on the electric motor. While you may think this is a missed feature or a disadvantage, on this bike it really isn’t.

At a tick under 42 pounds, the S2 isn’t very heavy by electric bike standards. It isn’t dripping in carbon fiber or plastic to save weight; the included fenders are metal, not plastic. The aluminum frame is stout and stiff, and the aerodynamic-looking fork is also on the burly side. It’s just good design, spare and economical while also looking different, if not unusual.

As I mentioned, there’s a built-in lock for the back wheel which you activate by lining up lines on the hub and frame, and then pushing a small button. This pushes a metal pin into the disc brake’s raceway, which keeps the wheel from turning. If someone tries to roll the bike away without unlocking it, built-in motion sensors initiate a lion-like roar that erupts from the built-in speaker while a skull illuminates on the top of the frame. Further bike movement escalates the noise making and flashing lights until the bike essentially bricks itself and sends your phone a message. If your VanMoof really is stolen, and you have opted into VanMoof’s bike theft deterrence program, they will help you track and recover the bike.

The integrated front LED is pretty bright, and riding down an unlit street to the gym early one morning, it gave off adequate light to see any obstacles coming up in the roadway. The rear red tail light is also very bright and stays on, an option to make it blink would be a welcome addition in the app. 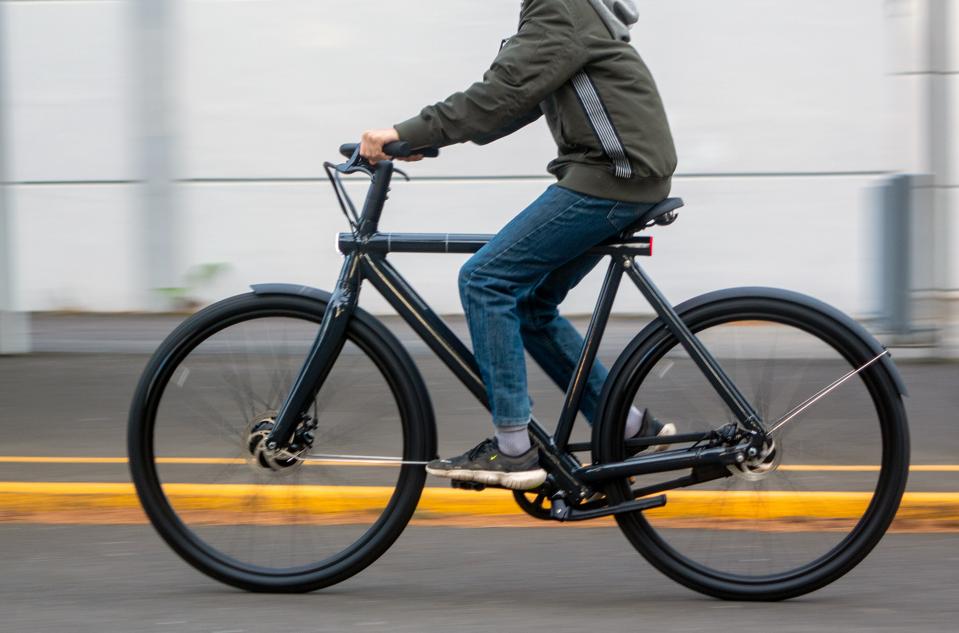 Hipsters may want the handlebars lower than this, but ‘fitting’ the S2 to your riding preferences is … [+] simple to do with the tools provided with the bike.

Once you set up the bike to your liking (the S2 includes spacers for raising the bars and tools for seat adjustments, etc.), it’s time to ride. The riding position is pure commuter; this isn’t a mountain bike or laid-back beach cruiser. You sit up properly and my hands naturally fell to the swept-back handlebars, which I raised a bit with said included spacers. The pedals are simple affairs with no toelips or clipless connectors. The softly sprung seat is comfortable on long rides. Start pedaling and the S2 starts out in low gear with no fuss, and soon you’re gliding along. In fact, this is about the least-fussy bike I’ve ever ridden, electric or otherwise. Others have compared it to an Apple (or Tesla) product, and while that may be cliché, it’s also spot-on. It looks so cool it would be insulting to call it appliance-like, but it is, in the best sort of way.

Motive power comes from pedaling an automatic shifting, enclosed 2-speed chain drive combined with a 250-watt front hub motor that ramps up power smoothly with no abruptness. Given Portland’s many hills, another lower cog in the chain drive or more power in the motor would have been nice, but as it was, it was adequate. The drive system changes gears at about 12 miles an hour, and if you’re coasting at that speed and begin to pedal, the system can get caught in the lower gear before shifting, resulting in quick pedal revolution with no resistance, which caught me by surprise a few times. It’s no big deal, and I just eased into pedaling instead of powering into the stroke. Otherwise the system shifts up and down flawlessly and quietly. 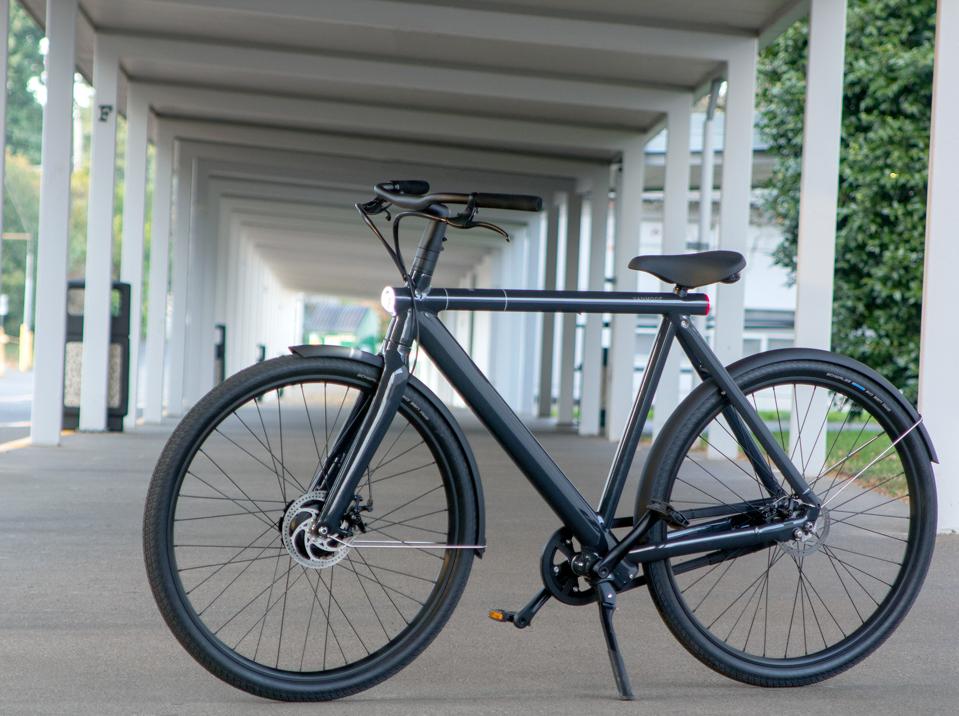 The S2 rides on 28-inch wheels shod in treaded street tires and they’re covered with those actual metal fenders that really keep the water off (something I tested often). The S2 just feels elegant as it goes down the road, like a finely tuned instrument. No squeaks, clunks, dings or wobbles, nothing to get used to, and only a quiet whir from the front hub as you cruise along at 20 miles an hour. Turning is precise and planted, and while I had my reservations after seeing it had cable-actuated disc brakes, I have to say they had excellent bite and power, performing better than some hydraulic systems I’ve had to endure, even on some steep downhills.

It’s a testament to the VanMoof that I chose it over other electric bikes I had at the time (including my own) when I just felt like going for a spin. It was just a simple, relaxing, enjoyable experience to ride the S2.

The S2 is pure commuting bliss, and it’s just plain fun to cruise around on – the best compliment I can give an ebike. Are there faster electric bikes? Absolutely. But so far, nothing has come close to the zen experience of riding the VanMoof S2. My pre-teen son, who makes sure to “test” every ebike I get in for review and tends to favor the hot-rod machines, came back after a long session aboard the S2 with a quizzical look on his face. “It’s so good,” he said. “Why is it so good?” Thus commenced a long conversation about good design, fit and feel, three things VanMoof has gotten exactly right on the S2.

• Clever touches all around including a built-in wheel lock

• Drivetrain could use another gear for big hills

• Tail light could use a blink option in the app

YouTube Videos Of The Year – A Peek At Our Culture