Verizon Announces Initiative To “Feed The Frontlines,” Plus Grant Details For Small Businesses 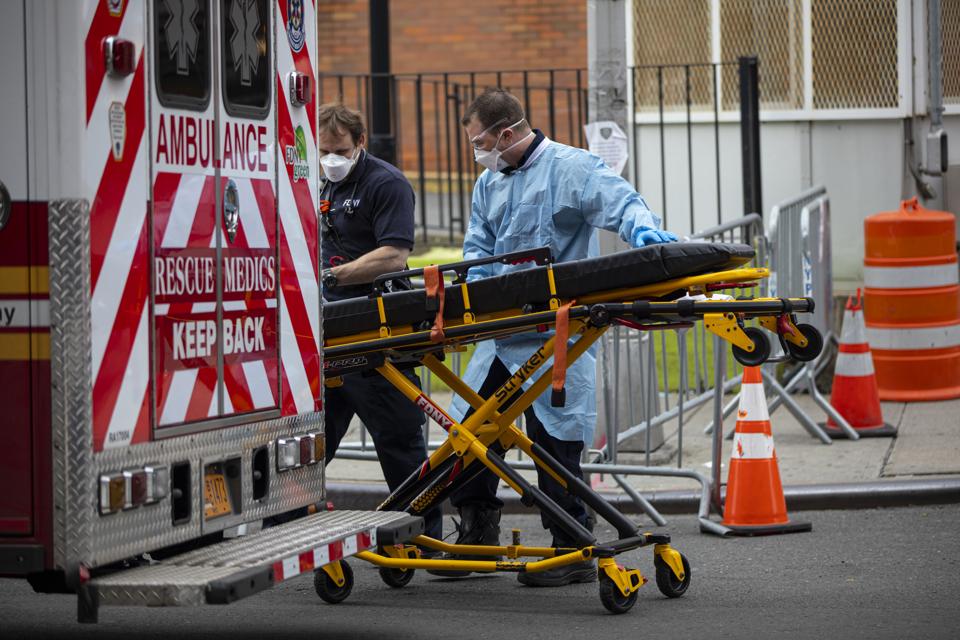 QUEENS, NEW YORK – MARCH 30: Two members of the Emergency Medical Team of the Fire Department of New … [+] York prepare their gurney before going on another ambulance call at the Elmhurst Hospital Center in the Queens borough of New York City on March 30, 2020. New York City is the epicenter of the coronavirus pandemic in the United States, putting historic pressure on a world-renowned healthcare system as the number of confirmed cases and deaths in the area grows. (Photo by Robert Nickelsberg/Getty Images)

The United States has reported more than 1,000 deaths due to COVID-19 in the past twenty four hour period, with the majority of the cases seen in New York City, according to a database updated by Johns Hopkins University.

Hospitals in the city have been struggling to keep up, and healthcare workers have described harrowing conditions.

Verizon’s latest initiative, “Feed the Frontlines” has hired seven local restaurants to make food for six hospitals across the city. In partnership with GrubHub, which has donated ordering and delivery services, “Feed the Frontlines” reaches 1,200 healthcare workers a day, while throwing a lifeline to seven struggling small businesses.

“Right from the get go we’ve seen the impact on small businesses. We asked what can we do to help small businesses find ways to continue to succeed,” says Tami Erwin, CEO of Verizon Business.

Julian Gaxholli, owner of Blue Restaurant in Staten Island, started his day at 6am yesterday, when his team delivered 300 individually wrapped meals to health workers at the Richmond University Medical Center, just a few blocks away.

“We’re so proud of them,” says Gaxholli. He says he was on the ground asking the workers what they wanted to eat so he could make it for them.

“We gave them four different types of salads, seven types of wraps, and eggplant parmesan, because its Staten Island,” says Gaxholli, laughing.

Blue Restaurant saw the impact of Andrew Cuomo’s stay-at-home order immediately, with sales dropping off 80-90%, according to Gaxholli. He had already been delivering food to the hospital’s ICU on a daily basis before Verizon reached out.

Gaxholli has seen the whole Staten Island community come together in support for their healthcare workers with local restaurants delivering free food.

“Too many [restaurants] to name,” he says.

The Locksmith Wine and Burger Bar in Washington Heights has been tapped by Verizon to serve Columbia Presbyterian Hospital. Joelle and Ludwig and Oscar Napa, two of the co-owners, have been in business together for oven ten years. 80% of their clientele were regulars who dined-in five to seven days a week, before COVID-19 hit.

Now, they have an opportunity to give back.

“We want to be here for the community, this is what has kept us in business for all these years,” says Napa.

“Were just grateful to be able to serve our community. That’s what the hospitality industry is about,” says Napa.

Sisters Marian and Hannah Cheng co-own Mimi Cheng’s, a Taiwanese restaurant named after their mother and inspired by her cooking.  They have two locations, one in NoLiTa and one in the East Village.

Last week they set up a GoFundMe to raise money to deliver dumplings to hospitals in the city. In response, they had 100 hospitals writing to them asking for food for 100 people each, they say.

“An evolution, for sure,” says Marian Cheng.

Verizon reached out, and now they are expanding their delivery to an additional 300 lunches a day. The lunches are going to New York Presbytarian Lower, the Hospital for Special Surgery, and the Maimonides Medical Center in Brooklyn.

“[Working with Verizon] enabled us to give our team more full-time hours again, and to have work security. Working with a partner with resources is game-changing,” they say. “It would be amazing if other large corporations followed Verizon’s example.”

Verizon is partnering with the Local Initiatives Support Corporation (LISC) to offer grants of up to $10,000 for struggling small businesses. Verizon donated $2.5 million to the fund, and is continuing to raise money through their “Pay It Forward Live” initiative.

The first application deadline is April 4th, and details can be found here.

The Network Gap And Its Impact On The War For Talent

Freemark Abbey – A Change In Winemakers, Not In Style