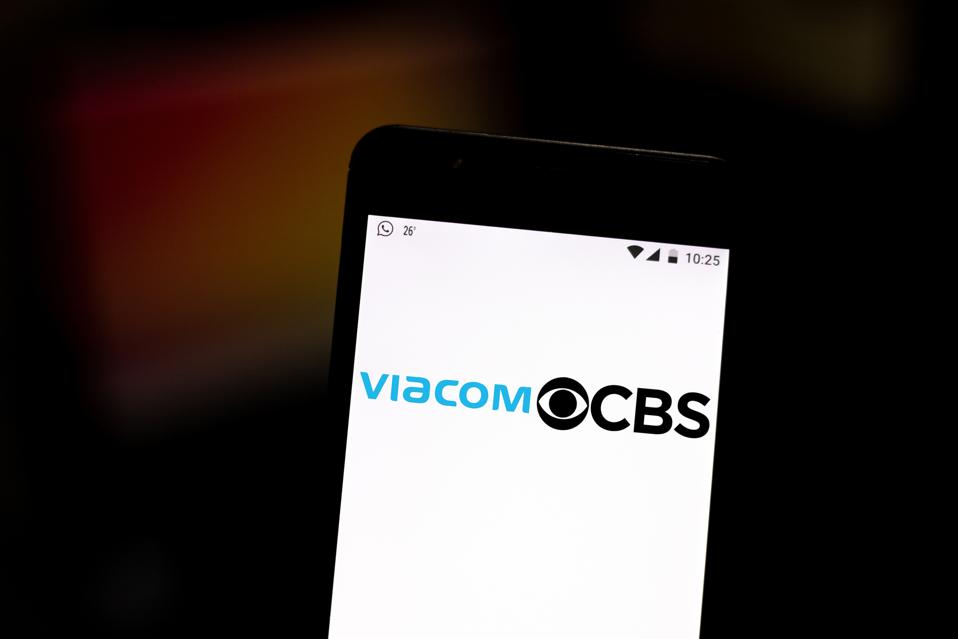 BRAZIL – 2019/08/12: In this photo illustration the Viacom CBS logo is seen displayed on a … [+] smartphone. (Photo Illustration by Rafael Henrique/SOPA Images/LightRocket via Getty Images)

Today, after markets close, it is official – Viacom and CBS will be merged and trade as one in the financial markets. The reunited (after 13 years) company’s new moniker is ViacomCBS. As I wrote several weeks ago when the long-anticipated and inevitable deal was first announced, theirs is a smart and practical marriage of necessity in an era in which size really does matter. It’s no time to be alone at the dance when essentially all other major U.S.-based “traditional” media companies have already paired up — AT&T/Time Warner (now WarnerMedia), Disney/Fox, and Comcast NBC Universal/Sky. The Viacom/CBS merger represents the last major gasp of frenetic traditional media M&A activity that has dominated, roiled and upended the media and entertainment business in the past few years. Expect 2020 to be relatively quiet comparatively.

That doesn’t mean that the new tech-driven media giants like Apple, Amazon, Google, AT&T and Verizon won’t enter the M&A picture in the not-too-distant-future, however. They most certainly will. And when they do, expect Sony’s entertainment assets, Netflix and Spotify to be in their lines of sight. Viacom and CBS reunited simply to survive in this daunting new entertainment world increasingly dominated by those new tech-driven media companies that drive fundamentally different and more forgiving business models. Remember, while CBS, Viacom and other traditional media companies monetize their content assets alone, the new tech-driven media giants hold the luxury of using content as marketing to drive their greater ambitions. For Apple, that means iPhone and Mac sales (and, for 2020, finally Apple’s long-awaited “next big thing” augmented reality glasses). For Amazon, that means Prime memberships and shopping. For Google, that means ads, ads and more ads. And for AT&T and Verizon, that means wireless plans (especially with the coming transformational 5G new wave that enters our worlds in 2020). For these tech-driven behemoths, content serves as their Trojan Horse.

Viacom and CBS play under a fundamentally different set of “content only” rules, and content only business models represent an existential threat. That means that scale and business model expansion represents an existential necessity. And that’s the plan. The reunited ViacomCBS entity will reach across all forms of entertainment engagement, both “traditional” and “new.” That means television, film, subscription video on demand (CBS All Access), advertising video on demand (Pluto TV), eSports, immersive entertainment (virtual, augmented and mixed reality), and live experiential. As I previously wrote, “more consumer touch-points mean more ways to monetize and more overall business model resiliency. Think of it as building a balanced financial portfolio. Same thing. That’s what this is all about.”

Not surprisingly, Viacom’s Bob Bakish heads up the reunited companies. After all, Bakish lead Viacom’s international operations before Sumner Redstone hand picked him to breathe new life into Viacom. International expertise is Bakish’s “X” factor. He is expected to take ViacomCBS to new international heights in an increasingly digitally-driven borderless world that sees no international boundaries and requires no physical footprints. Speaking of digital, Viacom was essentially digitally dead prior to Bakish. That changed fast. Under his watch, Viacom bought Pluto TV for $340 million and kid-friendly digital studio AwesomenessTV for pennies on the dollar, paying Comcast NBCUniversal a reported $50 million for a property previously valued at $650 million. Bakish also invested in Jeffrey Katzenberg’s highly-anticipated new mobile-first media company Quibi that launches in 2020. Bakish wasn’t done yet. He also entered the world of eSports, investing in Super League Gaming. And in smart counter-programming, Viacom acquired out-of-home entertainment companies Vidcon (the Comic-Con of the video world) and SnowGlobe (the largest outdoor New Year’s Eve music festival in the U.S.).

Bakish and Viacom should be applauded from these bold multi-platform moves. And CBS will greatly benefit from them. Now its content and IP will find new ways to engage across platforms and around the world. Meanwhile, Viacom benefits from CBS’s content and distribution success that gives the combined companies significantly more scale for advertisers. Perhaps the Viacom-CBS marriage is not the most romantic story. But, it is certainly a practical one.

What The Coronavirus Is Doing To Our Malls

50 Simple Ways To Care For Yourself During...