Breaking
Making America’s Trumps Pay Their Fair Share
Fortnite Season 4, Week 9 Challenges Revealed And...
Yesterday You Were Just A Business; Today You...
Should Your Company Help Get Out The Vote?...
Hyperautomation And What It Means For Your Business
Parker-Hannifin Crosses Pre-Covid Peak But Investors Set To...
6 Reasons Your Cold Messaging Efforts Fail And...
4 Analytics Categories To Track To Improve Your...
Predictions 2021: Cloud Computing Powers Pandemic Recovery
This Is Why You Need A Strategy In...
Economic Research Exposes Significant Flaws In DOL H-1B...
How Breast Cancer Turned This Entrepreneur Into A...
Bitcoin Price: What Next After Fresh Surge Toward...
Societal Platform Thinking
Trump And Biden Will Debate Suburbs’ Future To...
Apple Has More Bad News For iPhone 12...
Home Business ViacomCBS’ Downward Spiral Is Accelerating As Talk Of Unraveling Grows
Business

ViacomCBS’ Downward Spiral Is Accelerating As Talk Of Unraveling Grows 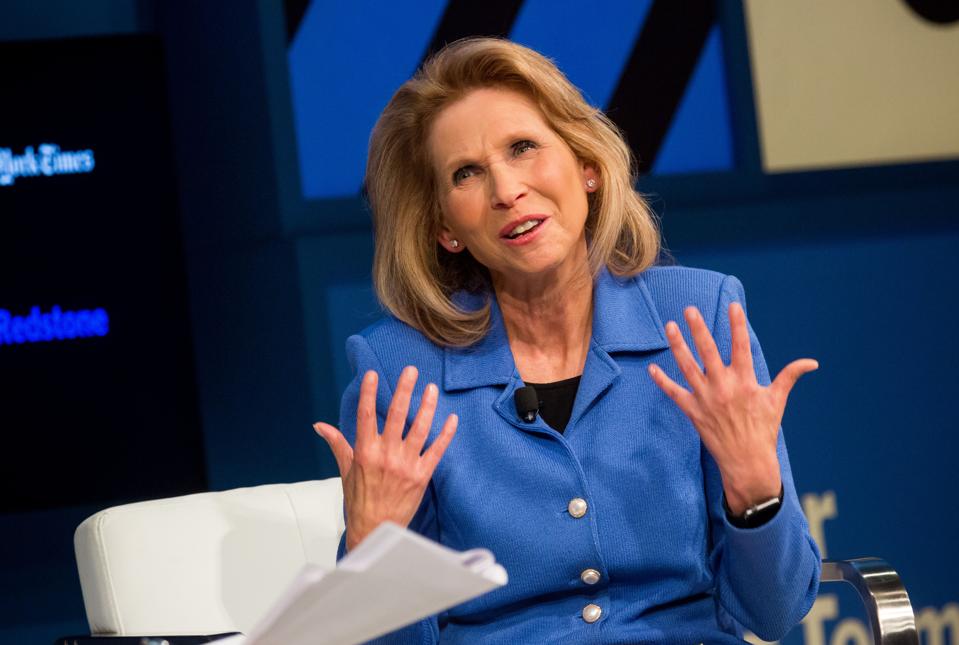 Shari Redstone at a conference in New York in 2016. (Photo by Michael Nagle/Bloomberg)

Just a few months ago, Shari Redstone was basking in the triumph of a lifetime. After decades of lawsuits, bitter sniping, cruel insults and brutal boardroom warfare, the 65-year-old billionaire’s daughter had wrested control of her father’s media empire from a coterie of powerful enemies, putting a newly merged ViacomCBS under her control.

Newly ensconced in her father’s old office, 52 stories above New York’s Times Square, Redstone—once belittled as a “daddy’s girl”—had battled her way to a legitimate claim of being the media industry’s most powerful woman. Six months later, that victory lap has turned into a strenuous uphill climb. And the coronavirus pandemic has just handed her a large bag of rocks.

“The merger was a huge mistake,” says Craig Huber, of Huber Research Partners. “They should have sold Viacom many years ago, rather than saddle CBS with it.”

The combined businesses issued their first report card in February, delivering a loss from continued operations of $273 million on revenue of $6.9 billion, a 3% drop over the prior year. They’ve also lagged behind their peers in launching a subscription streaming service that could compete with Disney+, Netflix, Hulu, NBCUniversal’s Peacock and Warner Media’s HBO Max.

Future reports were not expected to be much better even before coronavirus lockdowns put a freeze on entertainment and sports businesses. Then came the cancellation of the NCAA’s March Madness basketball tournament and with it ad revenue of more than $1 billion, which would have been divided between the two rights holders, CBS and Turner.

“The underlying problem here is that, despite $28 billion in revenues, the company generates a paltry amount of free cash flow,” the research firm MoffettNathanson wrote in a report published March 27. “It is mind-boggling to figure out where the cash flow is actually.”

It’s not likely to be found soon. The Paramount film studio can’t make movies right now, nor can it collect revenue from showing those that it has produced since theaters are largely closed. Furthermore, veteran media analyst Harold Vogel wrote last week that the company’s $18.7 billion of debt at year-end was “too high for comfort,” with $800 million of it coming due in the next year. “Cash flow in support of this debt is a relative trickle of what it ought to be at this stage,” he wrote.

Pressure is mounting for management to act. The problem is there are few good options.

ViacomCBS shares plummeted 18% the day after the February earnings report came out and have fallen another 48% since. Valued at about $25 billion after the merger, the combined businesses are now trading at a market capitalization of less than $10 billion. There are plans underway to sell off its book publishing arm, Simon & Schuster, but many are advocating the sale of far larger assets, like the Showtime movie channel or Paramount (whose titles include Top Gun, Mission Impossible and Star Trek), to shore up its balance sheet.

Neither is likely without a struggle, considering how former CEO Philippe Dauman fell out of favor with Sumner Redstone when he suggested in 2016 that Sumner sell a piece of Paramount, reportedly at a valuation as high as $5.5 billion. Any major transaction would also require signoff from Shari Redstone, who spent years fighting to combine and ultimately control the businesses.

“That was always Sumner’s issue, is that he fought so hard to put everything together that he never wanted to take it apart,” says another former Viacom executive, who spoke on the condition of anonymity. “I think that Shari probably feels the same way.”

In addition to the woes at Paramount, cable networks Nickelodeon and MTV, once at the pinnacle of cultural relevance, are bleeding viewers. As of February, Nickelodeon had lost 44% of its audience in the past five years; MTV has also hemorrhaged viewers and revenue and is working to rebuild. The profitability of CBS’ legacy networks (almost entirely Showtime) dropped 8% in 2018 and 22% in the first nine months of 2019, according to MoffettNathanson, while last year it increased production volume by 30%, a move the research firm called “largely ill advised.”

On ViacomCBS’ February earnings call, CEO Bob Bakish admitted that Showtime was a “working capital headwind for the company” in 2019, but emphasized that he planned to improve cost efficiency across the business.

Adding to cost pressures are the upcoming negotiations for the rights to air NFL football on CBS and a network carriage deal with Dish, the U.S. satellite network, both critical gets. CBS has a 10-year NFL agreement that expires in 2023 and may need to be renegotiated sooner, a scenario with “no good outcome,” according to Huber. Either it will lose out on the right to air games—a disaster—or it will pay huge fees, which will further eat into margins.

Meanwhile, past deals by CBS to provide some of its premium content to Netflix, including NCIS and Criminal Minds, “likely played a role in their own demise,” according to MoffettNathanson, by limiting the appeal of CBS All Access, the company’s flagship streaming service.

The bright spots are few. Management shake-ups have slowed and Redstone has a seemingly solid partnership with Bob Bakish, a Viacom veteran who took over as CEO in 2016. Pluto TV, the ad-supported streaming service Viacom bought last year for $340 million expects to end 2020 with 30 million (unpaid) monthly active users, compared to at least 28 million current subscribers at Disney+ and over 167 million at Netflix, which are collecting monthly fees from all of them. Hulu, also controlled by Disney, has more than 30 million paying subscribers. Still, ViacomCBS enjoys sustained cultural relevance overseas with the likes of Nickelodeon and MTV, including in Europe and South America.

Help could come from a viable new film franchise that could challenge Disney’s Marvel and Star Wars franchises, or the DC Comics superhero films from Warner Bros., for instance. Or one of the networks could find a breakthrough television show. But ViacomCBS is already spending $13 billion on new programming, roughly the same spend as Netflix, which is now calling the shots in Hollywood. In recent years Netflix has put out groundbreaking content like Stranger Things, Marriage Story, Tiger King and Narcos.

The company could also stem some of the bleeding by merging CBS All Access with a competitor like NBCUniversal’s Peacock or Hulu. The conglomerate has a more existential problem, though, being a “pigmy among giants,” according to Vogel, which has left it looking like a sitting duck for a well-funded buyer like Amazon, Apple or Netflix, or even a hedge fund that may see value in buying the whole thing and chopping it up for parts.

Said one large ViacomCBS shareholder in a February email to Forbes: “Almost certainly the sum of the parts valuation here is well in excess [of] like double the public market value of the stock.”

“The realization of Shari’s quest to merge Viacom and CBS is now completely irrelevant,” adds a former board member, who spoke on the condition of anonymity. “What the company needs to do urgently is to shore up its weak financial position by eliminating its dividend, following Disney’s lead in cutting executive compensation, and selling assets. The survival of ViacomCBS as a viable media player, or even as a viable company, is at stake.”

The largest recipient of those dividend payments is National Amusements, which is already facing liquidity pressure. Primarily in the movie theater business, it has been largely shut down to avoid the spread of coronavirus. According to S&P Global Ratings, which downgraded the firm’s credit rating earlier this month, National Amusements is “dependent on its dividend income to service its debt.” S&P adds that the company “could face a potential liquidity crisis if theaters remain closed beyond August.”

The fate of National Amusements is critical. Through the firm, Sumner—96 and ailing—controls the family’s 79% voting stake in ViacomCBS, which will be divided in two on his passing. Half will go to half for the benefit of his descendants, whose trustees will include Shari and her son as well as others with long ties to members of the family, including divorce lawyers for Sumner and his former wife, Phyllis, and a National Amusements executive. The other trust will be for the benefit of Phyllis.

Shari Redstone is showing no signs of backing down. She purchased $2 million worth of ViacomCBS shares in the last two months and, as she told us in September when discussing her battle for the family business, not one who worries much about outside opinions: “No matter how hard or challenging it got, I tried to keep my head down, fight for what was right and not read the press.”

With additional reporting by Ariel Shapiro and Dawn Chmielewski.

‘Do The Low Commotion’: How To Manage Technology Projects To Avoid Crisis