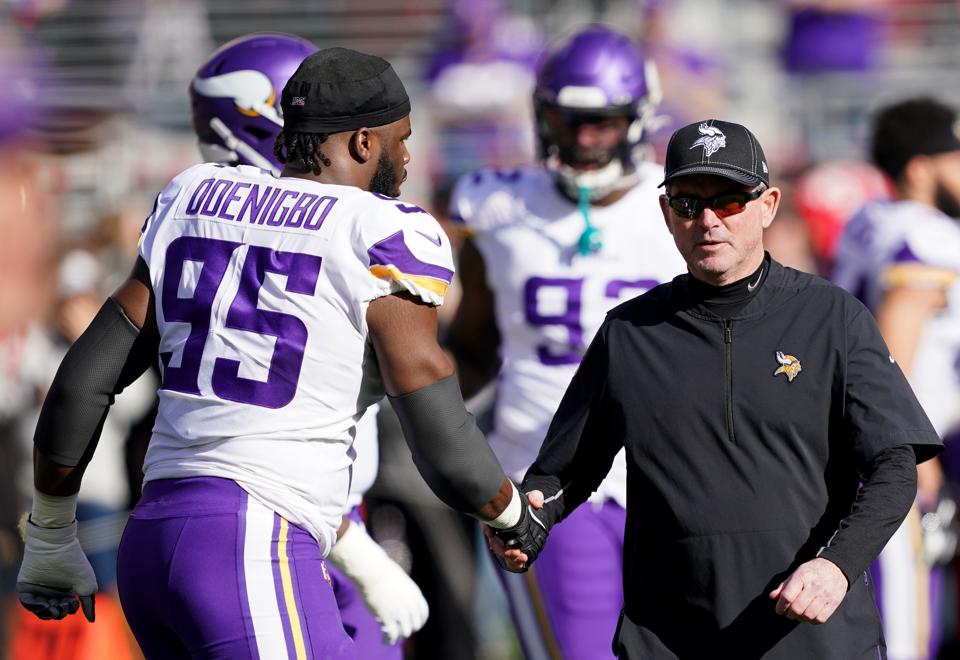 The Vikings have to get better on defense in 2020, and that means bigger and tougher. (Photo by … [+] Thearon W. Henderson/Getty Images)

The Minnesota Vikings were arguably the most talented team in the NFC this season. However, when they look at the conference championship game this Sunday, the presence of the San Francisco 49ers and the Green Bay Packers will tell them that something went wrong and it will have to be fixed if this team is going to have a chance to go further during the 2020 NFL season.

After a heroic performance at New Orleans in the wild-card playoff game, the Vikings offered a meek showing against the 49ers in the divisional playoffs. The oddsmakers expected Minnesota’s demise, as they were more than a touchdown underdog in their trip to the Bay Area, and San Francisco pounded the Vikings with a relentless running game that exposed a weakness.

The 49ers offensive line consistently got a strong push against a Minnesota front seven that was supposed to be the team’s greatest strength. There was no subterfuge, subtlety or even a hint of trickery when the Niners went on an eight-play, 44-yard drive that culminated with Tevin Coleman’s two-yard TD run that gave San Francisco a 24-10 lead in the third quarter.

That score was basically the end of the game, because the Vikings did not have the ability to stop the muscular 49ers running game.

Head coach Mike Zimmer will be back in 2020, but his coordinators will not be. Offensive coordinator Kevin Stefanski may ultimately regret his decision to become head coach of the Cleveland Browns, a position that has been the road to nowhere for the team’s previous 10 head coaches since 1999, when the current version of the team began playing. That does not include two interim head coaches.

If Stefanski lasts more than two seasons in Cleveland, it would be something of a surprise.

While Stefanski left on his own, defensive coordinator George Edwards will not be back. His contract had reached its conclusion, and he will not be coming back.

The performance of the defense was clearly not on Edwards, since Zimmer is the true boss of the defense and that is not likely to change as long as the head coach remains with the team. Zimmer’s ability as a defensive coordinator was proven a long time ago, but if he is going to turn this unit around, the Vikings need to present a stronger front seven.

That became obvious against the 49ers because the team kept getting pushed backwards. That was underscored by the above-referenced third-quarter drive, and that simply can’t happen in an NFL playoff game.

Zimmer has referenced the problem since the loss, saying that the team needs to get younger – and presumably stronger – if it is going to advance further in the future.

As the Vikings consider reshaping an aging core, Zimmer said the decisions ahead of them could be difficult because of what certain players have meant to him personally.

“These players — the ones that have been with me for six years now — they’ve busted their rear ends, and they’ve done everything I’ve asked them to do. And that’s always going to come into play; how you feel about them as a person,” Zimmer said, per the Minneapolis Star-Tribune. “But I think you have to really look at: ‘He’s a great kid. He’s worked his rear end off. We love him here. Can he still play? Or, if he can still play, at what level is it?’ And then you’ve got to match that with the salary and every other thing, and match it with the salary cap. So, there’s so many different variables.”

This will not be easy because Zimmer is a loyal man who has acknowledged how hard his players have worked and his personal fondness for them. However, the evidence that showed itself so clearly against the 49ers indicates that the personnel has to be upgraded, particularly up front.

There are many other areas that need to be fixed and addressed in the offseason. Finding a new offensive coordinator is one of them and getting more consistent play from special teams is another. Getting bigger, tougher and gaining more depth on the offensive line is a major area of concern.

But the defense is not what it once was, and it is not good enough to win at this point. There are no doubts about 25-year-old Danielle Hunter (14.5 sacks) and 32-year-old Everson Griffen (8.0 sacks) is also effective. However, Griffen is not a young man anymore and that could impact Zimmer’s thinking.

The defensive team needs to be reworked into a bigger, stronger, younger and meaner unit. That has to be accomplished and expect Zimmer to make this his top priority in the offseason.