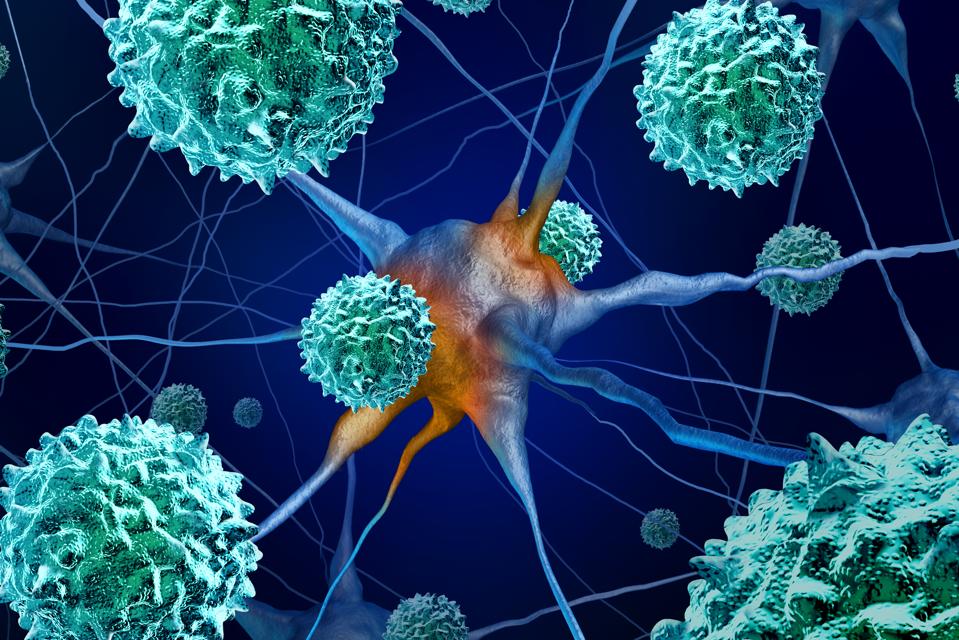 Early on in the novel coronavirus pandemic, we were warned about three cardinal symptoms associated with COVID-19: fever, cough and shortness of breath – symptoms commonly connected to most respiratory viral illnesses. But no longer. As each day goes by, we learn more and more about how this pathogen attacks the human body. Neurological signs and symptoms are among a growing list of clinical manifestations associated with SARS-CoV-2 which, at the time of this article’s publication, has resulted passed the 1 million mark in cases and has claimed 56,000+ lives in the U.S.

“It’s certainly clear that patients with COVID-19 experience generic constitutional symptoms such as dizziness and headache which are fairly common,” said Christa Swisher, MD, neurologist and neurocritical care specialist at the Duke University Department of Neurology . Dr. Swisher added: “There’s also a subset of patients that experience peripheral nervous system manifestations such as rhabdomyolysis and anosmia.”

A recent case series published in JAMA Neurology from Wuhan, China evaluated 214 patients with laboratory-confirmed COVID-19. Researchers observed neurologic symptoms in 36% of patients who had mild COVID-19 infection, and as high as 45% in patients with severe infection, based on respiratory status. Of the patients studied, the mean age was 52.7 years and 40.7% were male. 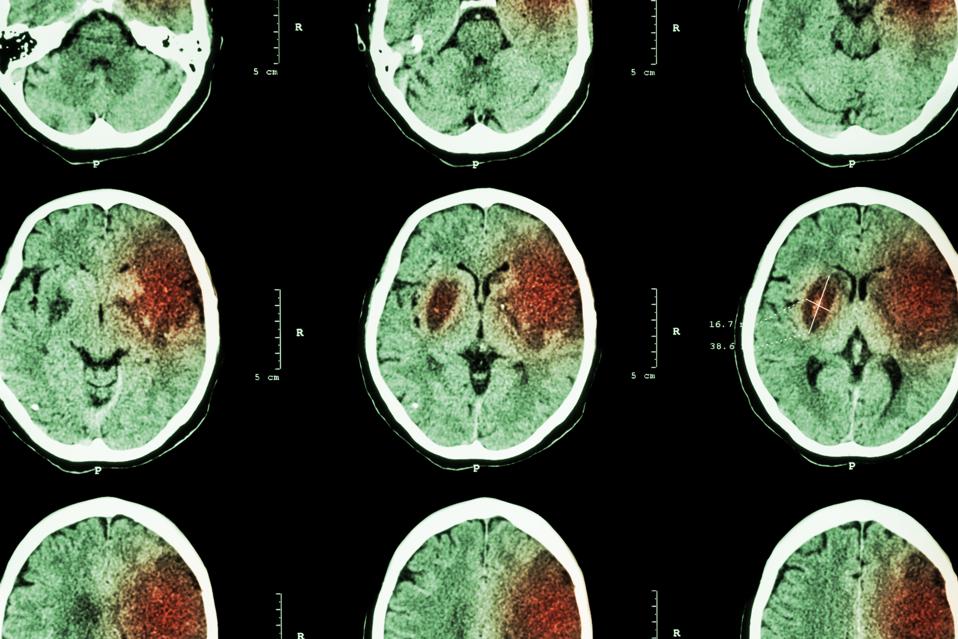 CT scans of the brain reveal an ischemic stroke (cerebral infarction) at at the left frontal, … [+] temporal and parietal lobes. COVID-19 has been associated with an increased incidence of strokes.

What are Neurologic Symptoms Associated with COVID-19?

Of the 36% of patients with neurologic manifestations, 24.8% had central nervous system (CNS) symptoms, 8.9% had peripheral nervous system (PNS) symptoms and 10.7% had skeletal muscle injury symptoms. The CNS consists of the brain and spinal cord whereas the PNS includes all the nerves outside the brain and spinal cord. Among CNS manifestations, the most common symptoms were dizziness (16.8%) and headache (13.1%); the most common PNS symptoms were impaired taste (5.6%) and smell (5.1%).

Nervous system issues were more common among patients with severe infections who tended to be older and more likely to have an underlying illness, often hypertension. These patients experienced acute cerebrovascular disease (i.e. ischemic and hemorrhagic strokes), impaired consciousness and seizure. Most neurologic symptoms – other than strokes and altered consciousness – occurred early in the disease course, median of 1-2 days. The authors also noted that some patients presented to the hospital only with neurologic symptoms as opposed to the typical triad of fever, cough or dyspnea. 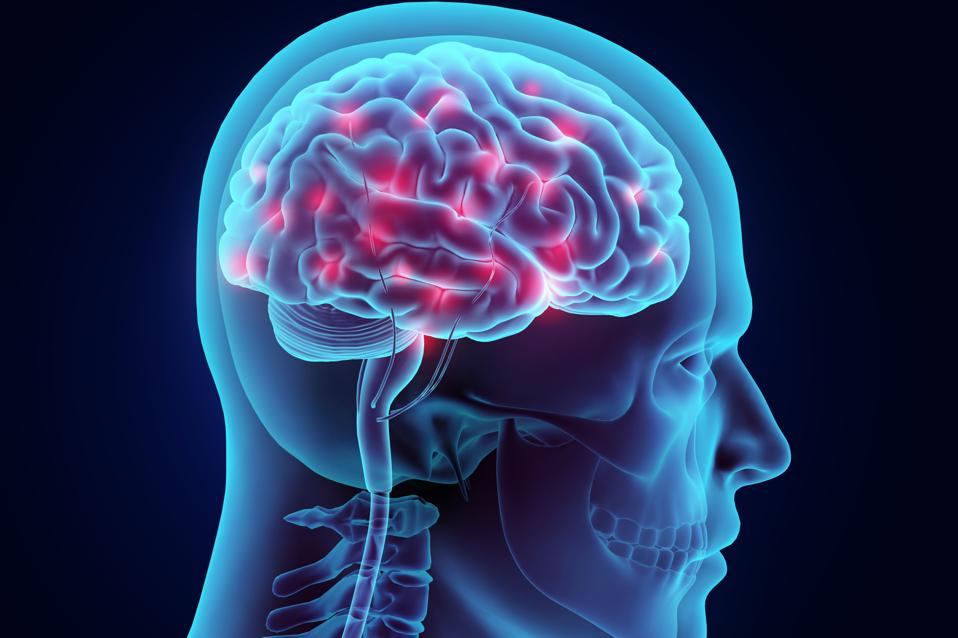 3D illustration of the brain which, along with the spinal cord, is part of the central nervous … [+] system (CNS). COVID-19 may be invading the CNS.

The exact pathophysiology is unclear. The authors hypothesize that SARS-CoV-2 is attacking the nervous system in a manner similar to that of the SARS and MERS viruses. Low levels of lymphocytes – a subset of white blood cells that fight infection – among patients with COVID-19 and CNS symptoms suggests immunosuppression, particularly among those with severe infection.

“While the exact mechanism of neurological involvement remains uncertain, it is likely a combination of direct viral invasion as well as the secondary effects of the immunologic and inflammatory responses directed towards the nervous system,” according to Thomas Pitts, MD, a neurologist and clinical neurophysiologist and Director of Neurology at New York City’s Hudson Medical.

Patients with severe infection were also found to have higher levels of d-dimer, a protein fragment associated with high levels of blood clot formation and breakdown. These findings are consistent with recent a phenomenon described by the American Society of Hematology as COVID-19-associated coagulopathy. In other words, patients with COVID-19 are exhibiting a high burden of clots in various parts of their body: lower extremities, lungs and the brain, with the latter two presenting as pulmonary emboli and ischemic strokes, respectively. 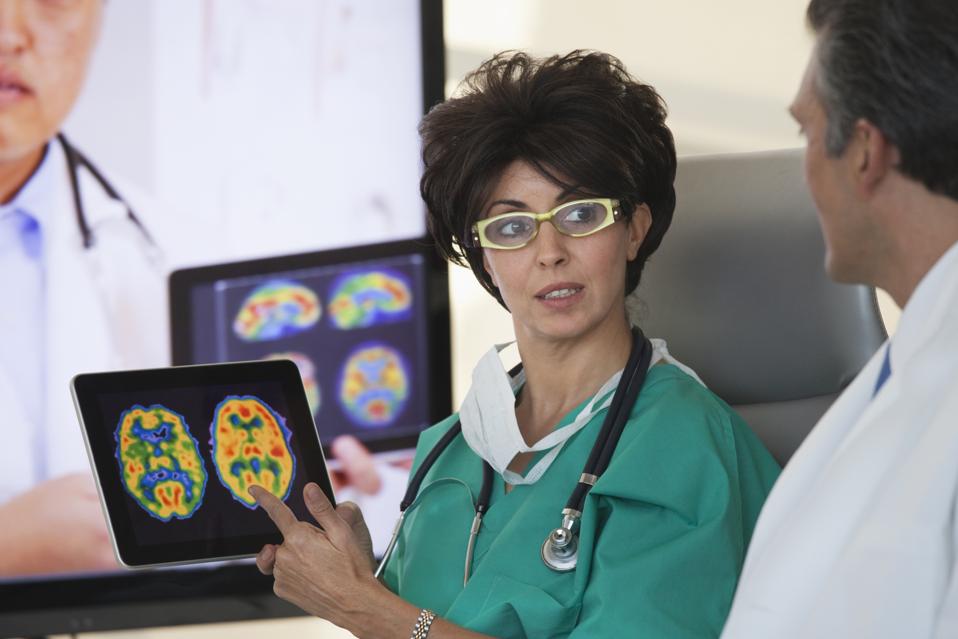 Neurologists have been moved to the frontlines of the COVID-19 pandemic in light of neurologic … [+] symptoms including stroke and seizures.

The authors of the study acknowledged that the findings would be strengthened by inclusion of patients beyond Wuhan and China. In addition, all clinical data were obtained from electronic medical records, so mild symptoms such impaired taste and smell could have been overlooked. Lastly, in an attempt to reduce the risk of cross-infection among an influx of COVID-19-infected patients, diagnostic procedures (e.g. lumbar puncture and electromyography) and advanced neuroimaging (e.g. MRI) were avoided. As a result, most symptoms were based on a patient’s subjective findings. Moreover, the researchers could not determine if the neurologic findings were caused directly by SARS-CoV-2, lung disease or other organ damage.

While these nervous system findings are fascinating, we do not know how – if at all – they will impact patients with other neurologic conditions such as Parkinson’s, Huntington’s, Alzheimer’s and Myasthenia Gravis, according to Robert Carruthers, MD, neurologist and clinical assistant professor at the University of British Columbia Division of Neurology.

“We don’t know how these findings will impact patients taking immunosuppressive medications for autoimmune diseases such as multiple sclerosis who may be at a higher risk for developing complications,” added Dr. Carruthers. 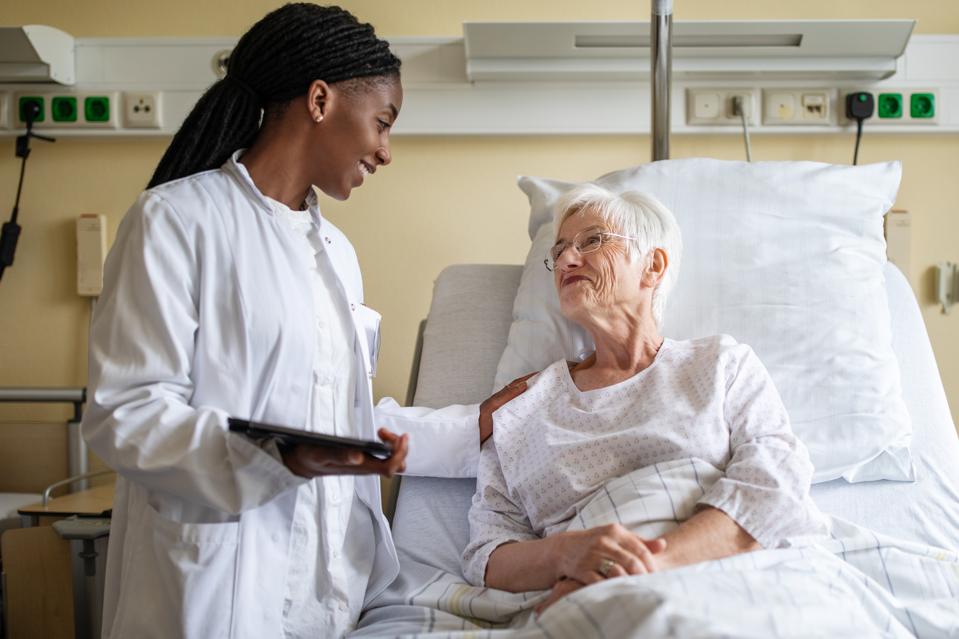 Patients with severe COVID-19 infection who experienced strokes, altered consciousness and seizures … [+] were often older and had other chronic medical conditions such as hypertension.

COVID-19-associated neurologic findings should prompt clinicians to consider SARS-CoV-2 infection in patients presenting with headache, seizures, dizziness, slurred speech, unilateral weakness or other nervous system manifestations. These findings have also moved neurologists to the frontlines, and they should expect to face infected patients in the coming months. Some are involved in nationwide conversations about these clinical findings.

“I’m part of an online group discussion with fellow female neurointensivists across the U.S.,” shared Dr. Swisher, adding that Sherry Chou, MD, a neurocritical care physician at the University of Pittsburgh, is leading a multinational consortium to prospectively evaluate neurologic complications in patients hospitalized with COVID-19. “The speed at which the protocol was developed and incorporated across institutions is nothing short of phenomenal.”

The novel coronavirus disease 2019 has unleashed medical and socioeconomic devastation on a global scale. We still have much to learn about SARS-CoV-2 and will need large-scale, controlled clinical trials to better understand the pathophysiology of this disease as well as discover effective treatment strategies.