Breaking
How To Get Your Startup Business Off The...
How To Create A COVID Safe Construction Site
How to Make a Good First Impression at...
Best Legal Practices For Reopening Sports Venues During...
Why Now Is A Good Time To Start...
Here’s Why Texas Instruments’ Stock Growing Almost 2x...
LinkedIn’s 50 Best Startups To Work For In...
3 Marketing Mistakes Holding You Back From Hitting...
Is The Matter In Our Universe Fundamentally Stable...
Majority Support Covid-19 Price Controls Says New Brookings...
Reimagined Pan-Mass Challenge Approaches $41M 2020 Fundraising Goal
Is Bitcoin Poised To Bounce Back After Its...
These ‘Temporary’ COVID-19 Changes Will Become Permanent
How Will Our Mental Health Be Affected By...
Selling A Business During A Pandemic: When Talented...
Top 10 Digital Transformation Trends For 2021
Two Veteran Entrepreneurs Aspire To Clean Up America’s...
PPP Forgiveness Applications Are Opening Up. Should You...
Best Domain Registrar
Home Business Viral Video Of Colorado Cops Holding Black Family At Gunpoint Ignites Outrage, Calls For Reform
Business

The Aurora, Colorado, police department apologized for handcuffing and holding a Black family—including a 12-year-old and 17-year old—at gunpoint, but outrage continues to brew over the family’s treatment and distrust of the Aurora police sparked by the 2019 death of another Black man, Elijah McClain, after they took him into custody. 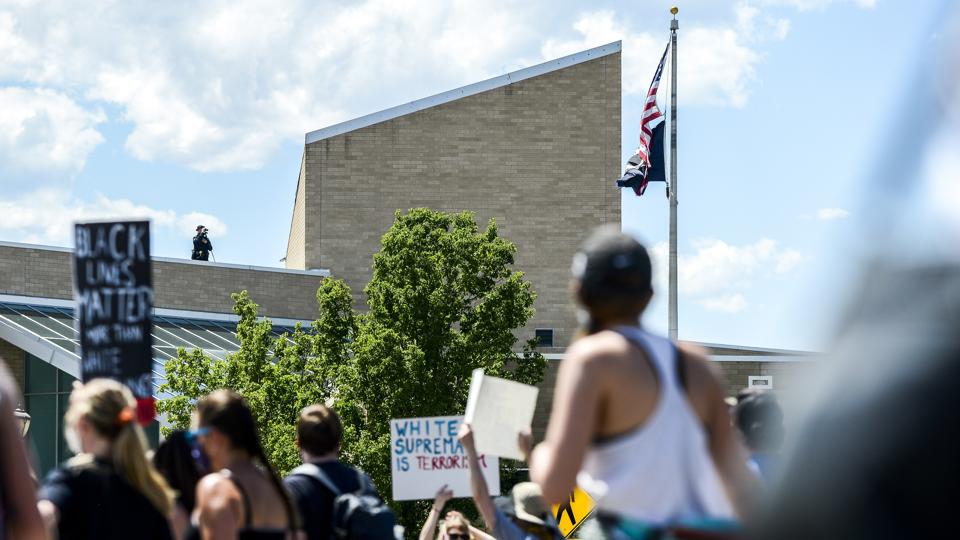 Protesters marching in June outside the Aurora police precinct in Elijah McClain’s memory.

Aurora police on Sunday stopped Brittney Gilliam and her four nieces, ranging from ages six to 17 in a parking lot, and forced the girls to lie on the hot pavement—who can be heard screaming and crying—and handcuffed the 12-year-old and 17-year old.

The officers detained Gilliam and her family because the license plate number on Gilliam’s SUV matched one for a motorcycle reported stolen, which Aurora police later admitted was an error.

A video of the incident captured by a bystander was posted to social media, and had been viewed over 2.3 million times on Twitter by Tuesday morning:

Aurora police chief Vanessa Wilson issued an apology and offered therapy to the family Monday, saying that the officers were trained to handle possible stolen cars by drawing their guns and ordering passengers to lie on the ground, but added that officers should be allowed to “deviate from this process when different scenarios present themselves.”

Outrage from the incident poured forth on social media, as users pointed out that in 2019, 23-year-old Black man Elijah McClain died after Aurora police put him in a chokehold and paramedics injected him with ketamine, used as a heavy sedative.

Social media users also pointed out that in 2012, James Holmes, the white male shooter who killed 12 people and injured 70 others at an Aurora movie theater, and said he taken into custody alive because of his race.

“It’s like they don’t care,” Teriana Thomas, Gilliam’s 14-year-old niece who was pinned down by Aurora officers, told Denver news outlet KUSA. “Who am I going to call when my life is in danger?”

“That @AuroraPD treated this family like this, even after #ElijahMcClain, is further proof that the Aurora PD requires an aggressive overhaul and intervention from external experts on community and nonviolence,” tweeted Bernice King, daughter of Martin Luther King Jr.

The Sunday detainment of Gilliam and her family—who were on their way to get their nails done at a salon—is what critics call the latest incident of police brutality inflicted on Black people. Aurora police chief Wilson said an investigation is underway for Sunday’s incident. In 2019, the Aurora police department fired the three officers involved in McClain’s arrest. More outrage was sparked by two Aurora officers who took selfies in front of McClain’s memorial in October, with one photo appearing to reenact his arrest. Wilson on July 3 fired the two officers in the photos, along with a third officer for not alerting supervisors about the photos. A fourth officer resigned before a disciplinary hearing around the incident.

How to Communicate Your Brand Story with Simple Marketing