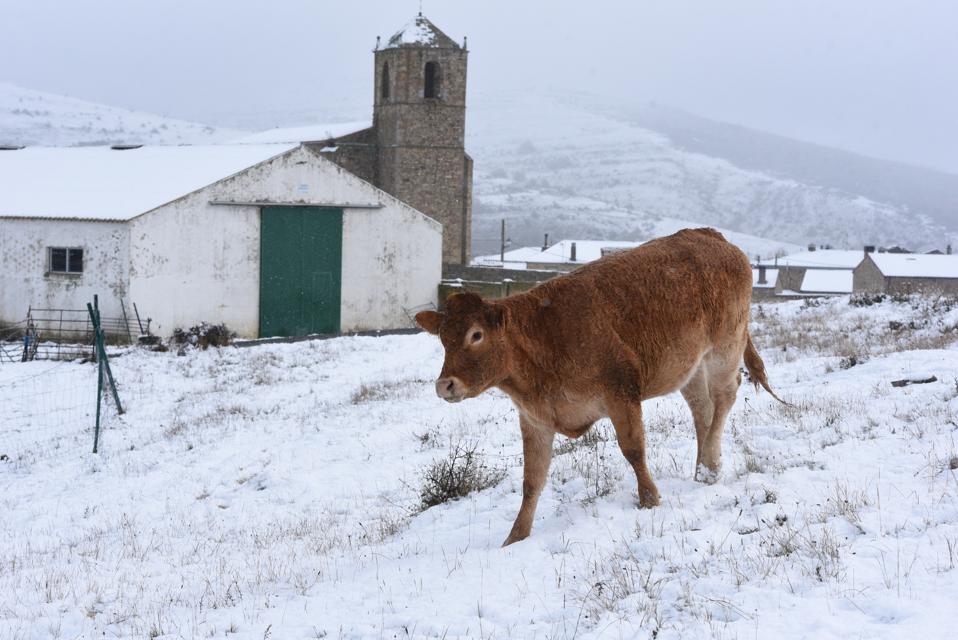 Cows have been given VR headsets to help them forget about the cold weather during Russia’s long … [+] winters. (Photo by John Milner/SOPA Images/LightRocket via Getty Images)

Virtual reality is coming for the cows. As announced by Moscow’s Ministry of Agriculture and Food, a team of researchers and vets have developed VR headsets for dairy cows living on a farm just outside of Moscow. The reason? To convince these cows that they’re standing in summer fields, rather than cold wintery ones. Not only does this calm them down and reduce any anxiety, but it ultimately makes them produce more milk.

Yes, VR is so promising as a new technology it’s even been applied to animals. Of course, the Russian cows didn’t don Oculus Rifts or HTC Vives, but were rather kitted out with specially designed headsets large enough to fit their bovine heads and also durable enough to withstand farm conditions. As for the particular summer environment they were immersed in, the designers gave it a warm and predominantly red color scheme, since studies on cattle vision have shown that cows perceive the red part of the visible spectrum better than others.

Importantly, experts recorded a drop in anxiety among the cows and an increase in the overall emotional mood of their herd. As for the impact on milk yields, this will be demonstrated by a further comprehensive study, although the Ministry expects it to increase, given the well-established links between emotional well-being and milk production.

It may be small-scale, but this trial raises some profound questions about the likely function of VR, particularly when it becomes a more widespread technology. In this case, VR is essentially being used to distract attention away from a harsh environment, to trick the cows into thinking that they’re standing in a nice warm field when, in actual fact, they really aren’t.

There’s a danger that VR will be used by and on people to much the same purpose. At a time of environmental breakdown, of increasing authoritarianism, and of growing inequality, there’s a risk that VR could become a seductive distraction. Instead of protesting about social ills and trying to solve them, we may instead find ourselves increasingly turning to our VR headsets to play the latest VR games or to lose ourselves in virtual environments and social networks, simply because it’s easier and more pleasurable.

This is all very speculative and dystopian, but there is evidence that something like this has already happened with existing technologies. In research published last year in the Journal of Happiness Studies, it was found that people are more likely to watch TV when they’re unhappy. The researchers also found that “being older, female, single, and unemployed as well as having lower income and poorer health predicted longer durations of TV watching.”

In other words, existing media such as TV and video games are already used to compensate for dissatisfaction with our lives and living conditions. They also seem to make it less likely that we’ll actually do something constructive to change our situations for the better, as shown by a paper published in 2017. Written by researchers at Princeton University and the University of Chicago, this study found that video games account “for 23 to 46 percent” of the decline in work by men aged 21-30 during the period between 2000 and 2015.

This kind of situation can only be made worse by VR, which by nature is much more immersive than previous media, and which has been shown to have a greater power to influence human emotions. In the future, we might increasingly turn to virtual reality to give us a quick fix of excitement and ‘happiness,’ but as with the cows in Moscow, this won’t change the reality of our lives.

The SF Giants’ Trevor Gott Has Got A...

Rob Gronkowski’s Reported WWE Signing Could Be A...