Breaking
Is An Internet Service Provider Revolution On The...
Why Selecting The Right Chairs And Tables For...
Walgreens Stock Looks Attractive At $35
How To Get CEOs And Board Directors Leading...
Bitcoin And Blockchain Are The ‘Future’ Of Twitter,...
COVID-19 Pandemic Has Birds Changing Their Tune
Beat Zoom Fatigue With These 6 Tips
How To Sustain (Or Sabotage) A Customer Service/Experience...
How, When And Where You Can See A...
New $2.2 Trillion Stimulus Bill Proposed—$1,200 Stimulus Checks,...
Why Do We Do What We Do? Manipulating...
California Brand Goes All-American As Amazon Bans Foreign...
The 3 Best Analytics Companies of 2020
Senator Cory Booker: Supporting Small, Minority-Owned Businesses Will...
Trump’s Taxes Are Finally Leaked—What’s Next?
Washington Heats Up Ahead Of First Presidential Debate:...
Home Finance Virus Visions Produce Stock Market Volatility And A Buying Opportunity
Finance 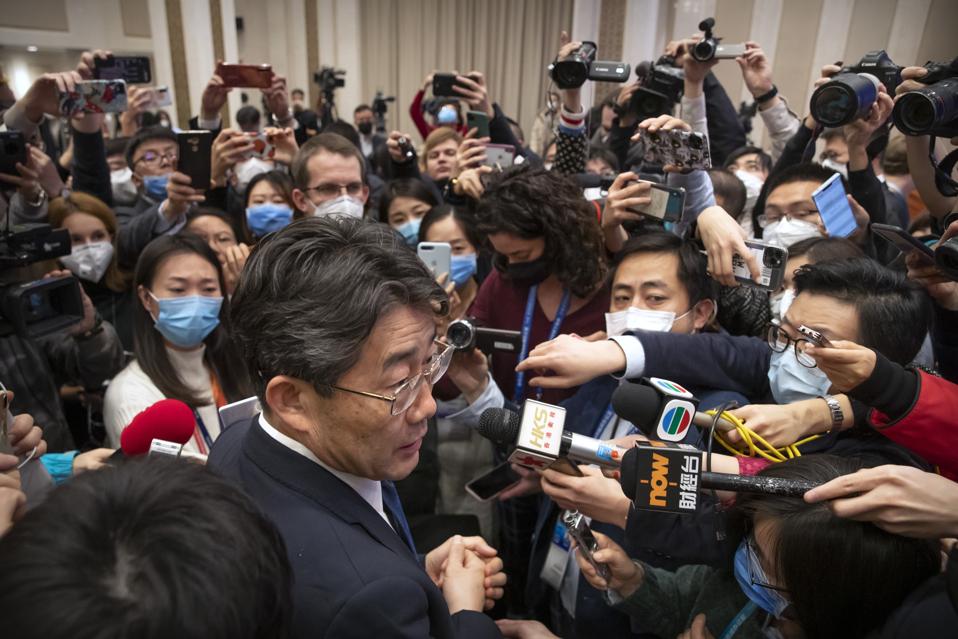 Gao Fu, bottom, the head of the Chinese Center for Disease Control and Prevention (CDC), speaks to … [+] journalists after a press conference about a virus outbreak at the State Council Information Office in Beijing, Sunday, Jan. 26, 2020. The new virus accelerated its spread in China, and the U.S. Consulate in the epicenter of the outbreak, the central city of Wuhan, announced Sunday it will evacuate its personnel and some private citizens aboard a charter flight. (AP Photo/Mark Schiefelbein)

Jason Zweig’s “Intelligent Investor” piece focuses on issues like climate change, but the key points apply equally to the China virus news and the resulting visions of a possible pandemic.

Could the worst case happen? Yes, but, as the article points out, such disastrous fears often bubble to the surface quickly, without factual support, then peter out as efforts counter effects, explanations moderate fears and the trend begins to reverse. Underscoring the point, Zweig concludes his article with a quote from Laurence B. Siegel (Gary P. Brinson director of research at the CFA Institute Research Foundation): “Apocalyptic thinking has always been wrong as a forecast, and it will continue to be wrong.”

First — What is this new virus? How does it spread? What are the symptoms? What is the pattern of the illness? How can it be contained and conquered? How can its return in the future be prevented?

Third – What is the mortality rate? This question highlights the key issue in Zweig’s article. Namely, how might our existence be terminated by what is happening?

Fourth — Will the authorities do the right thing? Will they pursue the cause? Will they accept what the scientists find and recommend? Will they provide transparency, letting the public know what is happening? Will they implement the “cure,” whatever that might mean?

Note: The questions in #4 are not a product of today’s political environment only. They have been important throughout modern history (for example, think Chernobyl, AIDS and cigarettes). Other issues and forces can get in the way and upend what logic and common sense would recommend.

Clearly, answering these questions will reduce the current uncertainties and, so long as the answers aren’t similar to those in a disaster movie, the dire visions will diminish. 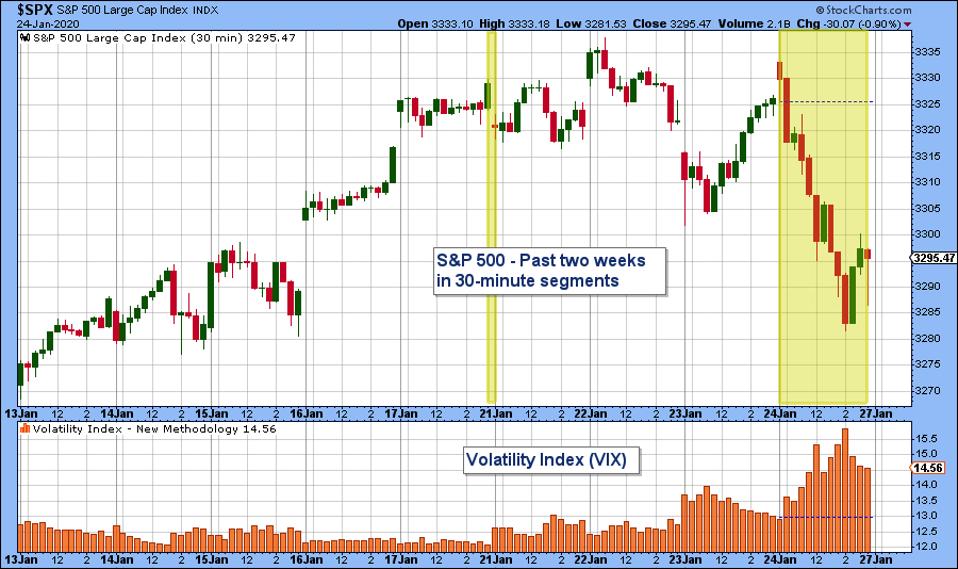 SP 500 Index over past two weeks

Here is the same price chart for the Dow Jones Industrial Average:

DJIA over past two weeks

In such volatile times, it is good to maintain a calmer perspective by viewing a longer-term picture. Examining weekly results starting with 2018 reminds us of both the lengthy foundation building and the still-intact, recent breakout run.

However, the lack of information today does not mean that tomorrow’s findings will be terrible. Similar to previous virus attacks, this one likely will be identified, understood and controlled. If so, a selloff now will be viewed later as a buying opportunity.