Breaking
How to Run Nonprofit Marketing Ads
Entrepreneurs Are Bringing Transparency To Home Buying And...
Best Incentive To Get Vaccinated: Money, Messaging, Or...
Page Level Query Analysis at Scale with Google...
How A CIO Can Align IT With Business...
Blogger of the Month: Jo, Girl Eats World
6 Things Women In Business Know That Men...
How to Use First-Party Data for Ad Personalization
Pressing Reset—Putting A Fallen Unicorn Back On Its...
How We Went Viral: Promoting Content with Influencers,...
Blame Olympic Record Price Tag For Return To...
Apple iOS 14.5 Release: Should You Upgrade?
How to Come up with Podcast Topics and...
Why Gaming Gear Company Razer Launched A $50...
Technical SEO Implementations to Increase the Impact of...
30 Brilliant Ways to Market Your Eco-Friendly Shopify...
Home Business Voters Want To See More Biden And Less Trump, Poll Finds
Business

A new poll released Sunday found that many voters feel they’ve seen too much of President Trump and not enough of Vice President Biden in recent weeks, while Democratic voters expressed a preference for Sen. Elizabeth Warren as vice president. 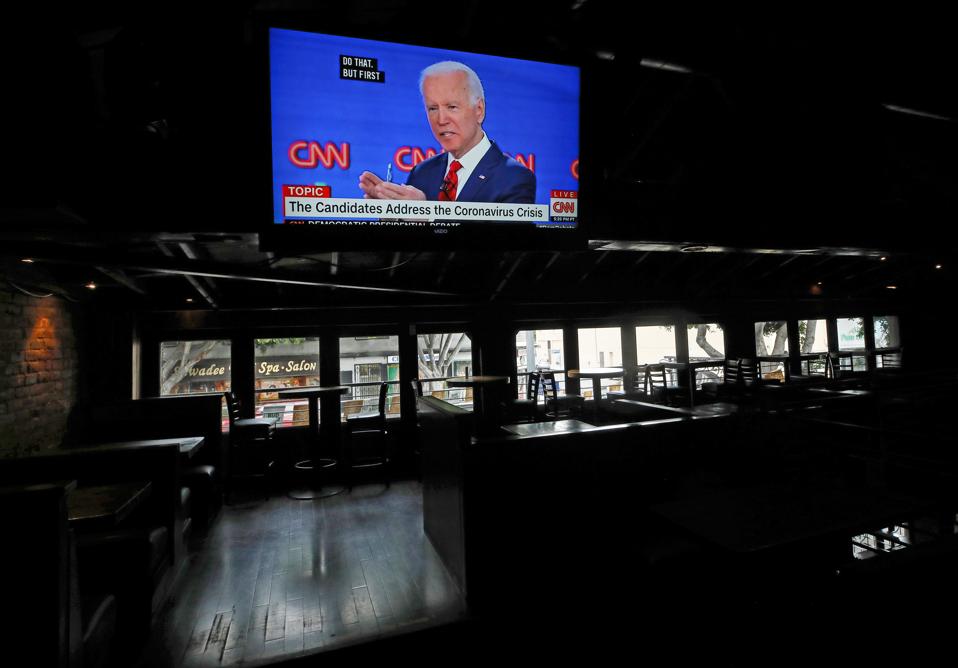 LOS ANGELES, CALIFORNIA – MARCH 15: Democratic presidential candidate former Vice President Joe … [+] Biden speaks about the coronavirus crisis on a live broadcast, in a nearly empty restaurant/bar during the 11th Democratic Party 2020 presidential debate on March 15, 2020 in Los Angeles, California. The debate featured Biden and Democratic presidential candidate Sen. Bernie Sanders (I-VT) in a CNN television studio without an audience in the wake of the spread of COVID-19. (Photo by Mario Tama/Getty Images)

The CBS News/YouGov poll, conducted between April 28 and May 1, showed Biden leading Trump among likely voters by 6 points, 49% to 43%.

The findings also bolster a belief among Trump allies that the president has overexposed himself during the coronavirus crisis, with 53% of voters saying they’ve seen too much of the president in recent weeks compared to just 11% who say they haven’t seen him enough.

Biden, by contrast, is seen by voters as being too shrouded during the pandemic, with only 24% saying they’ve seen him too much and 47% saying they haven’t seen him enough.

Voters also said that Biden’s choice of running mate will be a factor in deciding whether to vote for him, with 56% saying his pick will be somewhat or very important to their vote in November.

Warren leads the vice presidential field with 36% of Democratic voters picking her as compared to 19% for Sen. Kamala Harris, 14% for Stacey Abrams and 13% for Sen. Amy Klobuchar, with lesser known candidates like Susan Rice, Rep. Val Demings, Sen. Tammy Duckworth and Gov. Gretchen Whitmer in the low single digits.

Democratic voters put a high premium on a running mate’s preparedness, ability to turn out the democratic base, and experience in crisis and economic management, while also expressing slight preferences for a candidate who is seen as a “bold” pick, a progressive and well known nationally.

Far less important to Democratic voters is a potential running mate’s race, with 74% saying that race doesn’t matter compared to 23% who prefer a person of color and 3% who prefer someone white.

Donald Trump has been nearly omnipresent throughout the crisis, often leading the daily briefings of his coronavirus task force. But his approval and election polling numbers have declined in recent weeks, prompting his advisors to try to pull him out of the national spotlight. White House Press Secretary Kaleigh McEnany’s press briefing Friday marked the first formal briefing in over 400 days, potentially signaling that McEnany will subsume some of Trump’s duties as the public face of the administration.

Biden has had the opposite problem, with many commentators taking note of his relative absence from the campaign trail during the pandemic. Without formal duties to deal with the crisis, and with the virus making the physical campaign trail inaccessible, Biden has resorted to producing virtual town halls and podcasts. But he has gotten just a fraction of the president’s media coverage. Still, Biden has consistently led in the polls in recent weeks, leading some to believe that his absence is actually benefiting him.

The poll included some names for vice president that aren’t often floated, such as former UN Ambassador Susan Rice and former Acting Attorney General Sally Yates. This is in line with Biden’s statement in an interview on Saturday that his search committee is vetting “more than a dozen women” for the job. That would go beyond the six or seven women that are usually mentioned as top tier candidates.