Breaking
The Ultimate Guide to Saving Money
Lights, Camera, Action—Is There A Post-Covid Future For...
7 Ways to Reduce Human Errors in Your...
How ‘Couples Therapy’ Used Technology To Cope With...
Can You Settle Your Student Loans Or Negotiate...
How to Use Amazon Attribution For Ad Campaigns
What are the Makings of a High-Quality Link?
How To Quickly Start And Scale Your Business
Terra Virtua: What NFTs Can Teach Us About...
5 Easy Steps To Prepare Content For E-A-T...
Physical Inactivity Linked To More Severe Covid-19 Infection...
The 2021 Estimated Tax Dilemma: What Tax-Return Pros...
Want To Digitally Transform Your Business? Start With...
How to Optimize Google My Business and Leverage...
Debunking Link Building Myths in 2021
How, When And Where You Can Gaze At...
Home Technology Voyager 1’s Iconic ‘Pale Blue Dot’ Photo Is 30 Years Old. So NASA Made A New One
Technology 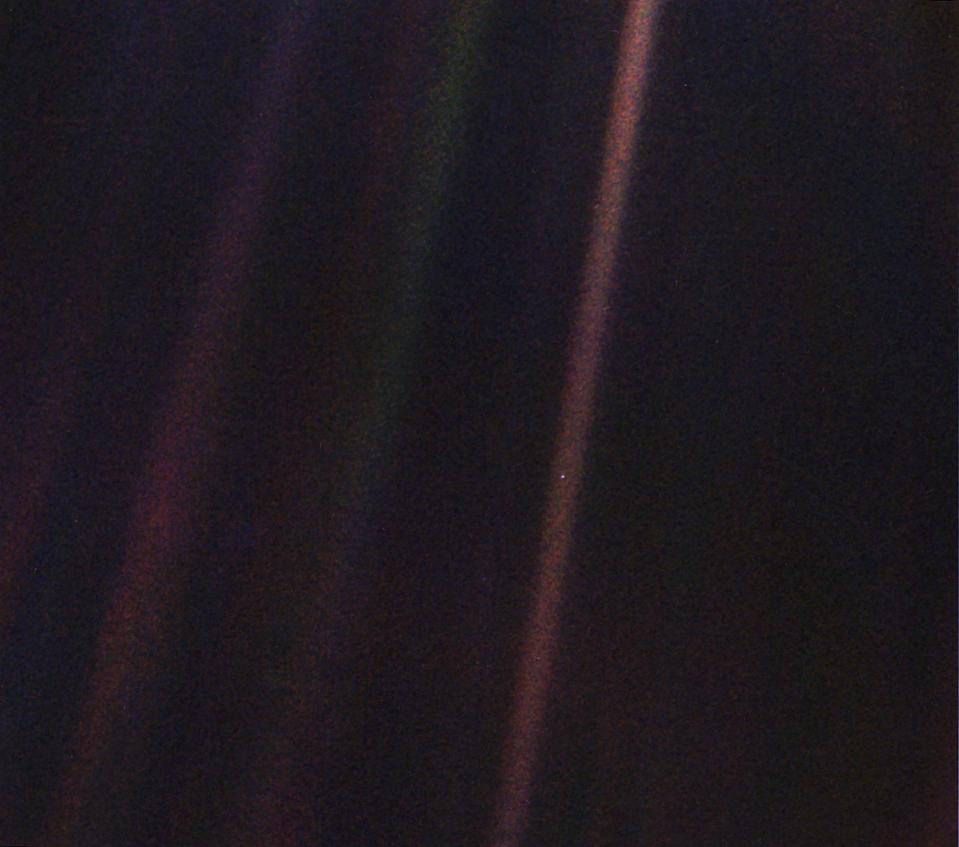 Earth, described by scientist Carl Sagan as a “Pale Blue Dot,” as seen by Voyager 1 from a distance … [+] of more than 4 billion miles (6.4 billion kilometers). 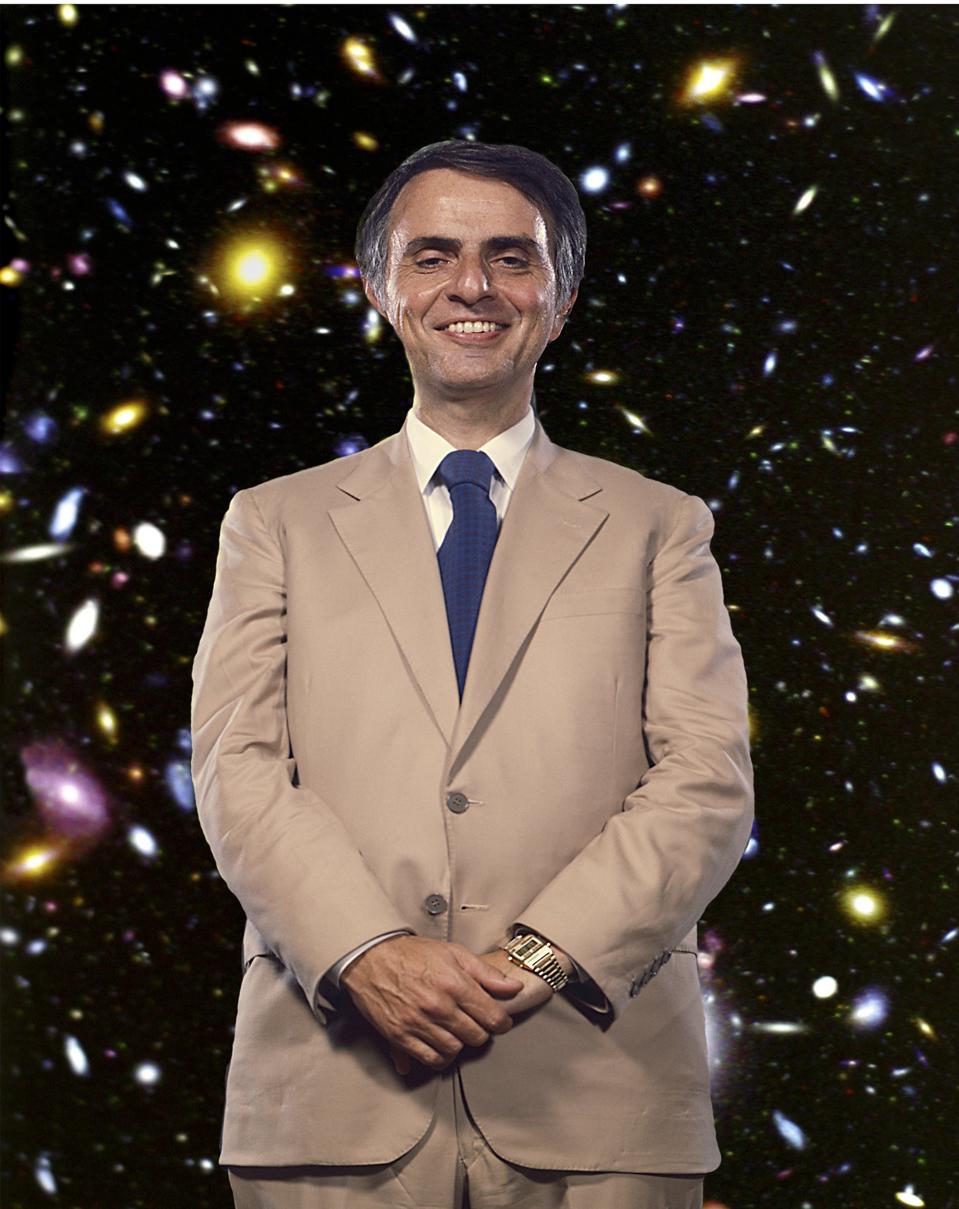 “Every saint and sinner in the history of our species lived there—on a mote of dust suspended in a sunbeam.”

The words of American astronomer Carl Sagan, published in his 1994 book “Pale Blue Dot: A Vision of the Human Future in Space” are some of the most stirring and enduring ever penned about Earth’s place in space.

The image of our planet “suspended in a sunbeam” was taken on Valentine’s Day, February 14, 1990, as a distant satellite heading out of the solar system turned its cameras back and took some one final image.

Or, at least, that’s the story. In fact, there were a lot more than one image taken that day by Voyager 1 as it took not just one image of Earth, but dozens—and of every other planet in the solar system, too. And now “Pale Blue Dot” has been updated for a new generation to gaze in awe at.

What does the ‘Pale Blue Dot’ image show?

Earth appears in the original “Pale Blue Dot” as a tiny blueish-white speck of a crescent a mere 0.12 pixel in size in an image that contains 640,000 pixels. It appears afloat in a great expanse of deep space. “Pale Blue Dot” is a magnified image, and the placing of Earth seemingly “suspended in a sunbeam” that’s brownish in color (in the original image, above) is a mere coincidence. 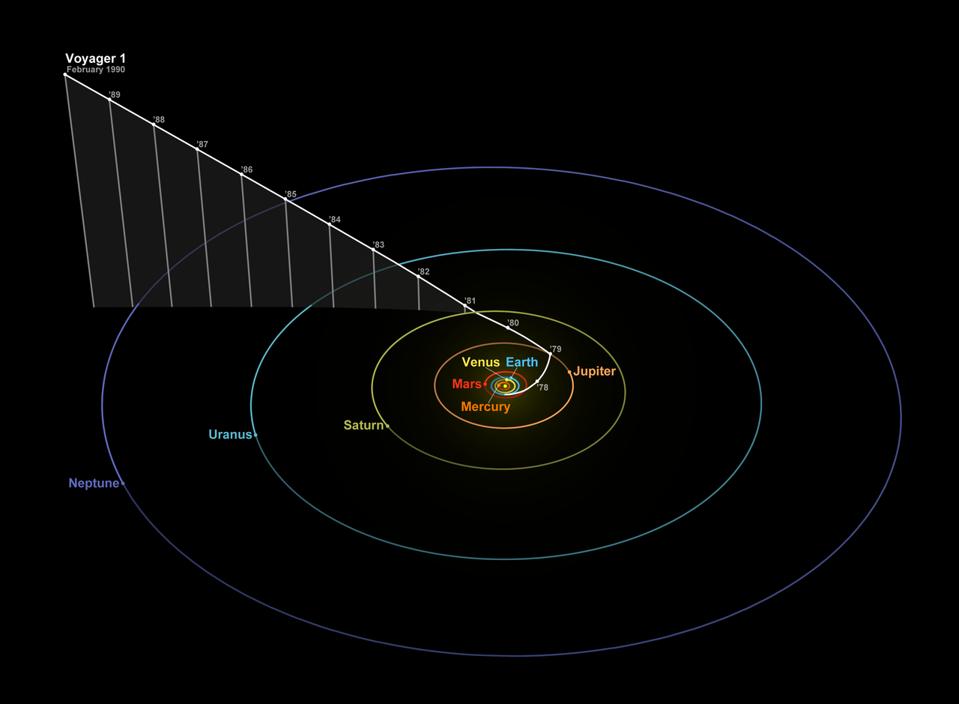 Position of Voyager 1 on February 14, 1990. The vertical bars are spaced one year apart and indicate … [+] the probe’s distance above the ecliptic.

Where was Voyager 1 and Earth when it took ‘Pale Blue Dot?’

Voyager 1 was 4 billion miles/6.4 billion kilometers from Earth and 32º above the ecliptic—the plane of the solar system where all of the planets orbit, more or less—when it snapped the images that became known as “Pale Blue Dot.” Earth is pictured within a light ray from the sun because, as seen from Voyager 1’s perspective, Earth was close to the sun. So Voyager 1’s wide-angle camera had to take a photo that also included the sun. Voyager 1 is now 13 billion miles distant, firmly in interstellar space.

Who was the first person to see ‘Pale Blue Dot?’

That would be Dr. Candy Hansen-Koharcheck, who was part of the Voyager Imaging Team. “It gave me shivers down my spine the first time I saw the Earth, and it still gives me shivers to think about it,” she told me in an email earlier this week. 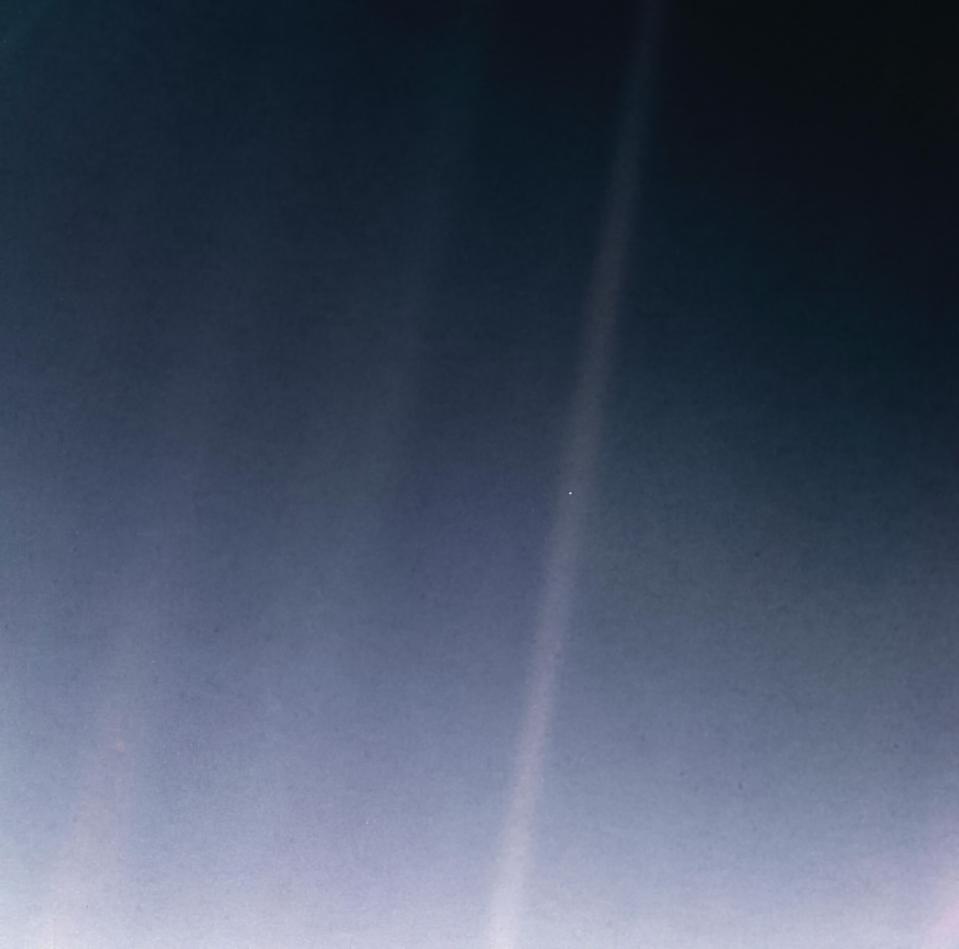 What does the new ‘Pale Blue Dot’ look like?

For the 30th anniversary of one of the most iconic images taken by NASA’s Voyager mission, a new version of the image (above) uses modern image-processing software and techniques to revisit the well-known Voyager view while attempting to respect the original data and intent of those who planned the images.

How significant was (and is) ‘Pale Blue Dot?’

“At the time the US and the Soviet Union were still in the Cold War, and that image spoke to us … we are all people on a tiny planet, and in a nuclear war everyone would lose,” said Hansen-Koharcheck. “The perspective that the image gives us was so important at the time, but it is still just as important now. Today the existential threat to humanity is climate change. We must fix that—there is no other planet to move to. We are all in it together.”

“So the image is really a timeless reminder to love and take care of our home world.”

Voyager 1 is the most distant man-made object from Earth and, at 13.8 billion miles, it’s now beyond the influence of the sun. It was part of NASA’s “Grand Tour” of the outer solar system, launching in September 1977 a few weeks after Voyager 2. It visited Jupiter in 1979 and Saturn (and Titan, its largest moon) in 1980 before heading on a trajectory out of the solar system while Voyager 2 visited Uranus and Neptune. So its mission was pretty much complete almost a decade before it took “Pale Blue Dot.”

Almost 43 years later, Voyager 1 is still sending back data to NASA’s Deep Space Network, though it will run out of electric power by 2025. 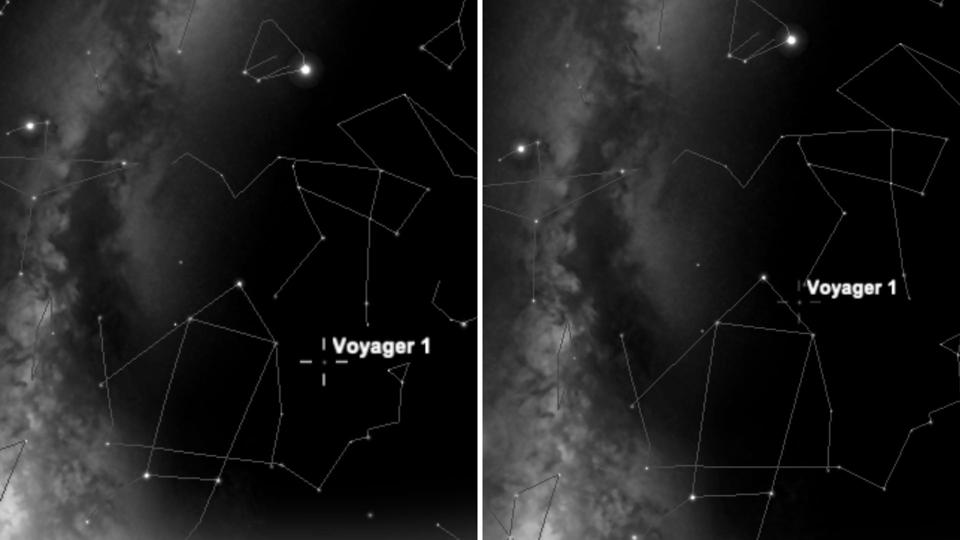 How was the ‘Pale Blue Dot’ image assembled?

The narrow-angle color image is was taken by Voyager’s 1’s 1,500 mm high-resolution narrow-angle camera using violet, blue and green colour spectral filters, and stored on the spacecraft’s tape recorder for a few weeks because NASA’s Deep Space Network was busy downloading images from its Magellan spacecraft at Venus and its Galileo spacecraft at Jupiter. When it was sent to Earth, the 60 images—which took five and a half hours to cross the solar system as radio signals—were then recombined as a single image. The image looks lo-res and noisy because it’s been zoomed-in on and magnified, which causes image artifacts.

Was ‘Pale Blue Dot’ the only image taken?

No—“Pale Blue Dot” is just one of a number of images that comprised the first ever “Family Portrait” of the solar system. All images were taken by Voyager 1, and NASA published a mosaic comprising its images of each planet. Voyager 1 actually took 60 photos of the solar system to create it.

Voyager 1’s “Family Portrait”. The cameras of Voyager 1 on Feb. 14, 1990, pointed back toward the … [+] sun and took a series of pictures of the sun and the planets, making the first ever “portrait” of our solar system as seen from the outside. 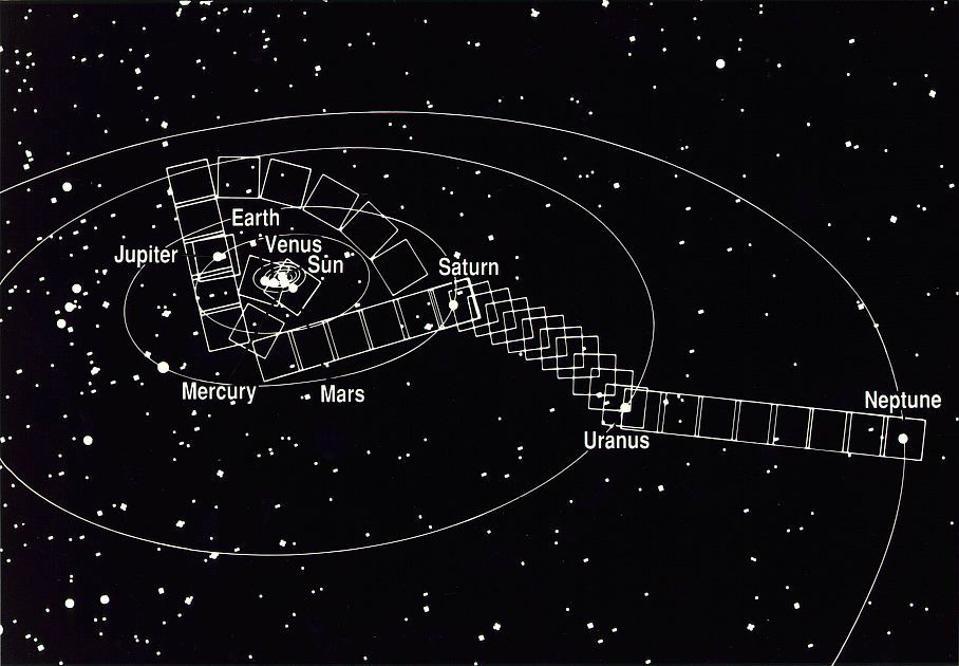 A diagram of the Voyager 1 “Family Portrait.”

What did Carl Sagan say when it was published?

Although the image was taken on Valentine’s Day in 1990, Carl Sagan actually unveiled the Pale Blue Dot image at a press conference about the Voyager missions in the summer of 1990. This is what he said at the time of the image’s unveiling to journalists:

“This is where we live—on a blue dot. Astronomy has always been said to be a humbling experience and I think these pictures underscore that point.”

What else did Carl Sagan say about ‘Pale Blue Dot?’

Somewhat unusually for a scientist, Sagan had a real gift for language, so here are some of his other passages about the significance of the “Pale Blue Dot” photo, taken from “Pale Blue Dot: A Vision of the Human Future in Space.”

“Our posturings, our imagined self-importance, the delusion that we have some privileged position in the Universe, are challenged by this point of pale light. Our planet is a lonely speck in the great enveloping cosmic dark. In our obscurity, in all this vastness, there is no hint that help will come from elsewhere to save us from ourselves. It has been said that astronomy is a humbling and character-building experience. There is perhaps no better demonstration of the folly of human conceits than this distant image of our tiny world. To me, it underscores our responsibility to deal more kindly with one another, and to preserve and cherish the pale blue dot, the only home we’ve ever known.”

Taken at 4:48 GMT on Feb. 14, 1990, “Pale Blue Dot” and other images that made-up the “Family Portrait” collection were the last thing Voyager 1’s cameras ever did. Just 34 minutes later, NASA mission managers sent commands to Voyager 1 to power its cameras down to save power for its long, long journey into interstellar space.

How The Financial Industry Is Confronting The Climate Threat

7 Reasons Why Exxon, Chevron, And Other Oil Stocks Have Lagged…And What To Expect