Breaking
Florida Supreme Court Tells The American Bar Association...
How to Write Perfect Paid Social Media Marketing...
How To Boost Productivity In Your Small IT...
How Restaurants Can Design a More Sustainable Food...
Expenses That Small Business Owners Need to Be...
How You Can Make Saying Goodbye To The...
Biden To Meet Royal Family At Cornwall’s Eden...
It’s Going To Be Emotional — Going International...
Peer Mentoring For Students: STEM & Buds
7 PR Trends in 2021: The Story So...
Google Plans Radical New Google Pixel Smartphone Upgrade
Where Did COVID Come From?
Ride To Growth With A Business Vehicle
C3.ai’s Tom Siebel: How To Scale AI
Moz Acquired by iContact Marketing Corp
10 Examples of Brands Using TikTok Stitch and...
Home Technology VR Takes The Stage As Conferences Cancel
Technology

It started with the cancellation of Mobile World Congress, one of the biggest international tech shows of the year. GDC, SXSW, Coachella, and E3 followed suit, as attendees of a Biogen conference in Boston were exposed through a colleague who had flown in from overseas. Now big companies like Google don’t even want their employees going across town. They’re all working from home. “The Chinese use two brush strokes to write the word ‘crisis,’” President John F. Kennedy famously said. “One brush stroke stands for danger; the other for opportunity. In a crisis, be aware of the danger—but recognize the opportunity.” This crisis is good for VR, because we need to be apart, but we want to be together. People are the killer app. 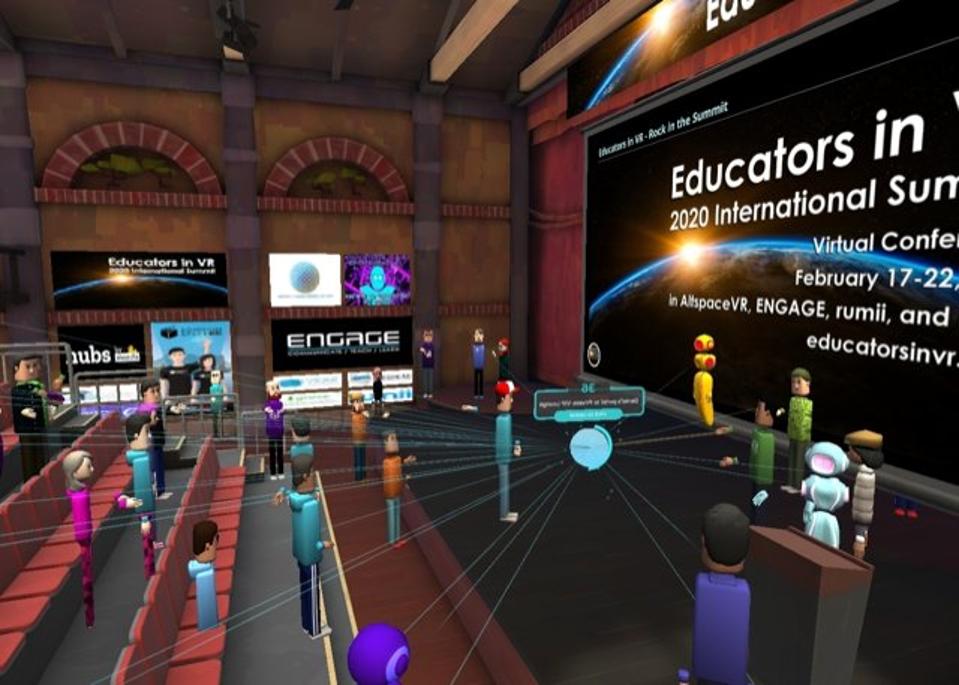 Educators in VR summit took place in AltSpaceVR, a virtual world Microsoft rescued out of bankruptcy … [+] in late 2018.

Several weeks ago, the first Educators in VR Summit took place in Microsoft’s AltSpace VR. Over six days 170 speakers took the virtual stage in 150 events over six days. Over 2,000 people attended. Organizer Daniel Dyboski-Bryant characterized the event as an unqualified success. “We achieved everything we set out to do and more. We worked with all our preferred platforms. We let our community and volunteers shine. We shined a spotlight on the industry and proved the viability of this tech for education and large events. We got high level attention. And we had a fantastic time.” Dybroski-Bryant also complimented AltSpace, which is free,  for providing unprecedented customer support for a free, non-profit event.

“The Educators in VR summit was an amazing community-driven effort to showcase what that could look like.” said Katie Kelly, Program Owner at AltspaceVR. “I did a rough estimate and factoring in the travel time and CO2e estimates that would have been spent. This summit took about 9 thousand cars off the road for the week of the summit and saved attendees around 5 million miles of travel. So whether we’re combating a global outbreak, climate change or remote work – there’s a lot that AltspaceVR and other VR platforms can do to help.” 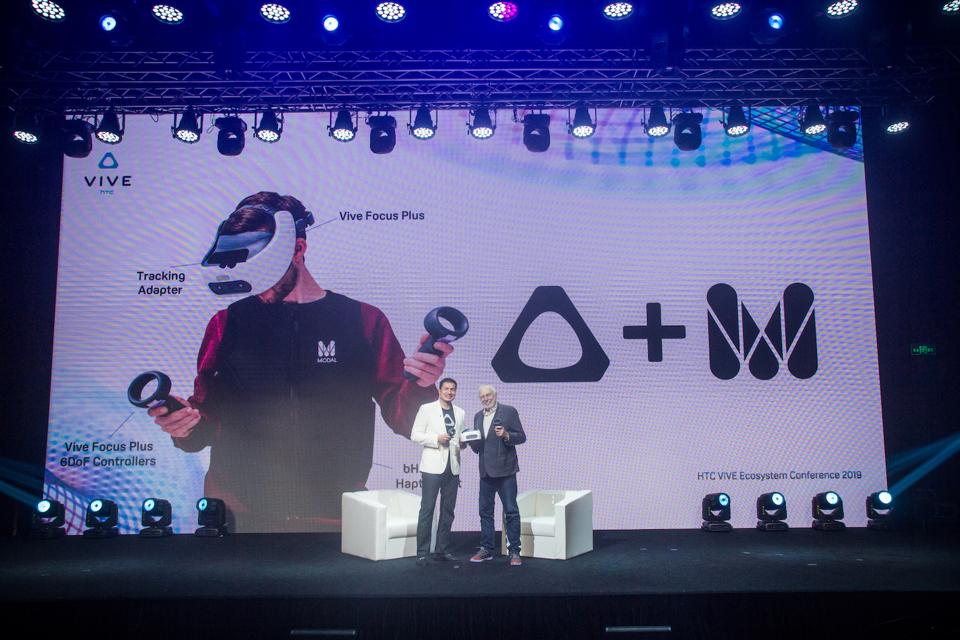 HTC is moving its third annual Vive Ecosystem Conference (VEC) in China to a virtual world built by Engage, rebranding it as V2EC, for Vive Virtual Ecosystem Conference. Advances in networking technology, speed, and real time rendering have enabled a host of important new features for virtual worlds and telepresence, such as cross platform accessibility, which allows users on any kind of VR and AR device, even a smartphone, to be present in the simulation. HTC 2020 VEC will take place on 19th March 2020 at 1:30 am GMT (6:30 pm PT) with official registrations opening tomorrow on the ENGAGE website.

“This is our 4th annual VEC event,” said HTC China President Alvin Graylin. “The first three were in Shenzhen, Beijing and Shanghai. Usually we have about 1,000 live attendees and 1-2 day events. Due to the virus outbreak we’ve been planning on doing it this year in VR for several months. The Engage team has been amazing, adding multilingual support, spatial conversations for 1:1 chats, and upgraded the server capacity to allow for up to 5k VR users live. V2EC is going to represent a new standard for how industry events will be done in the future.  And it’ll bring us added benefits of reducing travel costs, production costs and zero carbon to the environment! Win-win-win for organizers, speakers, attendees and the world!” 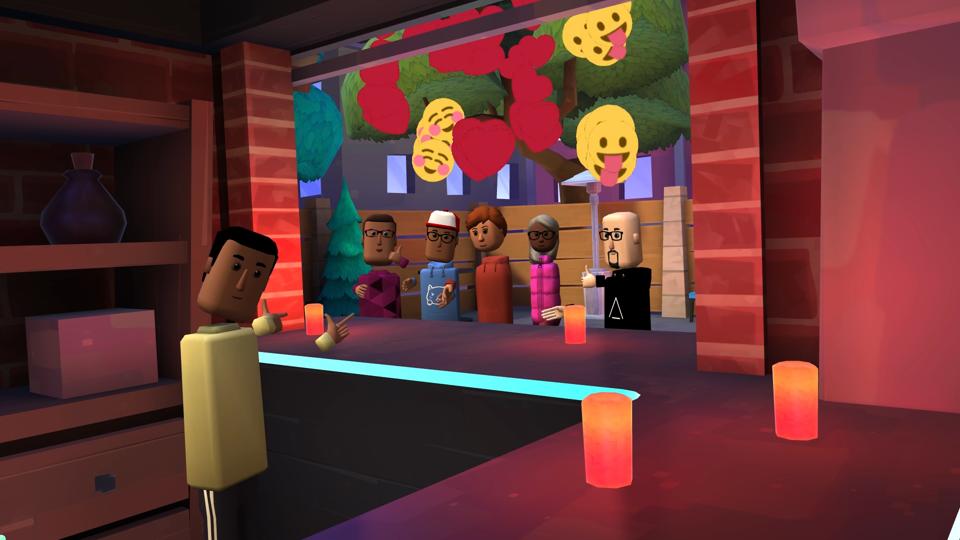 Socializing is a big part of conferences, but figuring out how to do it in VR is challenging.

Graylin cautioned conference organizers will have to develop new ways to engage and fulfill needs met on show floors or social and business connections made in line. “We’re planting lots of fun Easter eggs to make the venue and event more interesting that a standard conference.”

The crisis has put new wind in the sails of the first virtual world, Second Life, which continues to thrive. “We are seeing increased interest in Second Life as it is a safe place for people and organizations to socialize and work during this time of great anxiety and social distancing,” said Ebbe Altberg, CEO of Linden Lab, which created and operates Second Life. “There’s an uptick in logins from our existing community as well as from people discovering it for the first time. The Second Life economy is also showing strength and residents are making real money (over $60M last year).”

VictoryXR is an AR & VR school curriculum provider that also uses the Engage platform. They are now in the process of becoming accredited in Iowa and California to become an online virtual reality school (as opposed to a virtual school on a platform like Second Life, which is PC based). On March 30th, the Governor of Iowa, the Lt. Governor and the Director of Online Education will join VictoryXR on Engage to observe an actual class in virtual reality. 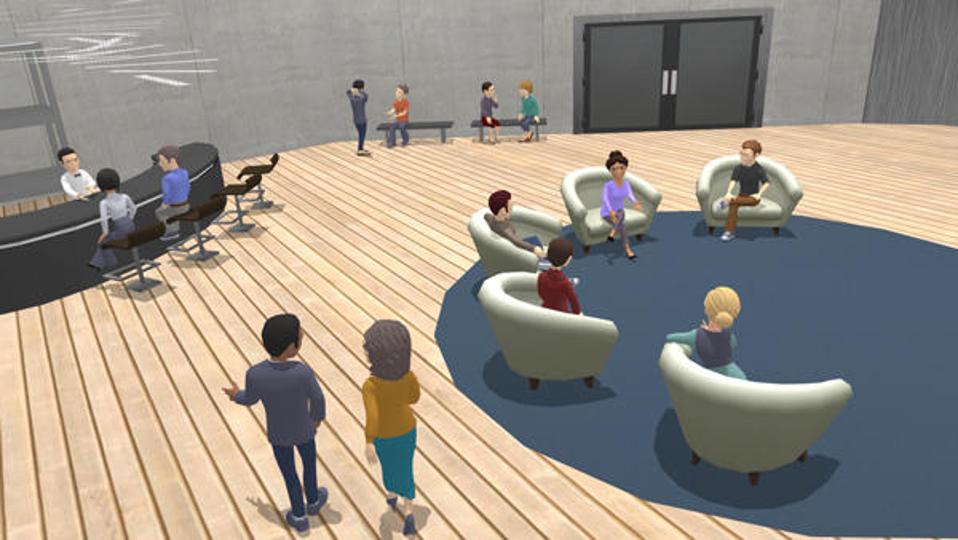 EXp Realty is a virtual, cloud-based real estate brokerage founded nearly a decade ago, similar to Second Life. It is also optimized for PCs and laptops. The virtual real estate company has more than 10,000 agents who they log on to “eXp World.” The technology is provided by the company VirBELA, which has also built virtual tools for universities and virtual classes like Coursera.

Our technology is capable of supporting online conferences of any size and format. “Think of VirBELA as the venue: convention center, stadium, hotel ballroom, break-out rooms. All that’s needed is the event support and attendees,” said Alex Howland, PhD, founder and President.

“The majority of our clients are large corporations and universities, but now we are getting more calls from event planners and organizations looking to host events without the fear of travel or large group settings.” 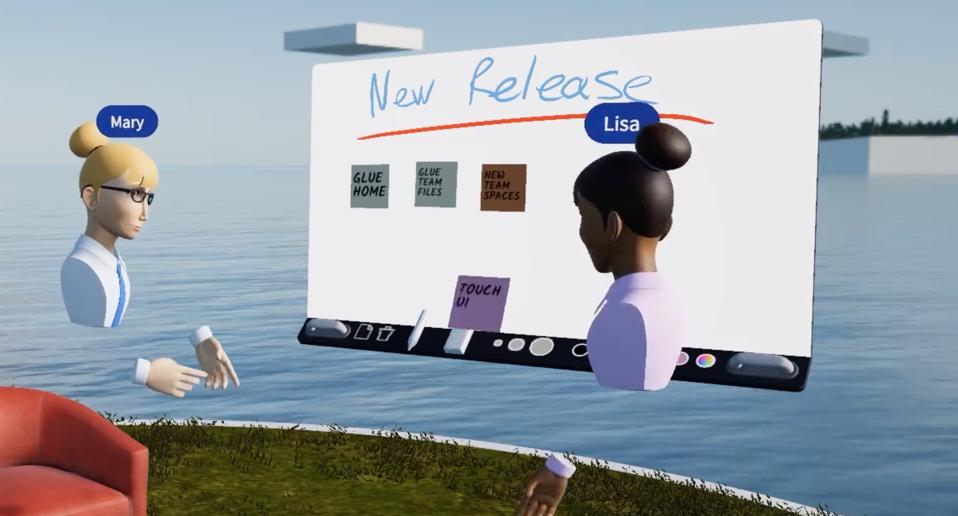 Glue, based in Helsinki, Finland, today introduced significant upgrades to its virtual world platform, Glue Team Space. These are immersive 3D environments optimized for teams of up to twenty people. Glue has been optimizing the product with HP, KLM Royal Dutch Airlines and Microsoft and introduced its expanded feature set, which features expanded virtual spaces and a new interface which enables users to easily write notes, create whiteboards and make annotations in 3D. Other features include new avatar selection so you can more closely mirror yourself in Glue Home, improved group teleport functionality, new supported languages and recording tools.

Jacob Lowenstein is Head of Business Development for Spatial.io, a remote conferencing system that works with every device and creates convincing avatars who can collaborate in the virtual space where participants can share whiteboards, post-its, videos and 3D models. The company presently has two dozen customers in various stages of implementation, including Mattel, Nestle Purina and BNP Paribas. “We’ve more than tripled usage across all headsets (HoloLens, Magic Leap, Quest) in the last month alone and usage numbers are accelerating. We are beginning to see exponential growth with Spatial monthly active users doubled in the last month alone. Inbound interest today has increased more than 400% since January.”

“Even after COVID-19 (hopefully) burns itself out, the degree of caution and uncertainty about travel is likely to continue,” said Lowenstein. “In addition, we expect that having had exposure to mixed reality collaboration, the increased interest and usage will not just wane in the wake of the current crisis.” Indeed, a lot of people are going to be experiencing virtual worlds (as distinct from virtual reality) from all sorts of devices, most commonly laptops, with smattering of spatial HMDs.

“This virus is unfortunately highlighting the need to improve the ability for people to feel like they’re together even when they’re not,” said AltSpace’s Kelly. The company is hiring more people to support the influx of new users. “We’re hopeful that we can combine these efforts and bring more content to our users and help conferences bring their content to our community.”

It comes as no surprise the tech conferences will move to VR first. This week the VRAR Association, a membership organization with 50,000 members in 65 cities around the world, announced it was cancelling it’s annual Lisbon event, and replacing it with a virtual event this spring.

The tech and XR (AR, VR, Wearables, Hearables, etc.) conferences are going to move to VR. The same thing is happening in the workplace. We’re still going to have meetings, and more of them are going to use XR. But not every participant will be in XR. But they will see the people inside the simulation. And they will want that. Things change. We will lose things, like the handshake. But things will be gained. The future is local. The future is sustainable.

BTS On The Canadian Albums Chart: 4 Ways They Made History When Their New Album Debuted