Breaking
Meet Onesimus, The Enslaved Man Who Saved Boston...
How to Build a Sales Forecast Model
The Unexpected Ways COVID-19 Has Forever Changed What...
Google Posts: Conversion Factor — Not Ranking Factor
How To Bring Your Branding To Life
Coinbase Cofounders And Investors Poised To Rake In...
How To Stay Top-of-Mind For Your Audience With...
Employers: Eight Red Flags You May Not Notice...
The benefits of videoing in the automotive industry
Ted Lasso, Other Apple TV+ Shows Arriving Soon...
How To Incorporate Click And Collect Into Your...
What Are Working Capital Loans and When Should...
The 10 Biggest Trends in Entrepreneurship to Look...
Clubhouse Has Grown 10X In Two Months. Here’s...
Here’s Why Tyson Foods Stock Looks Undervalued At...
How To Maintain Client Relationships During Long Projects
Home Business Walt Disney World Is Open, But Was Opening Weekend A Success?
Business

Walt Disney World Is Open, But Was Opening Weekend A Success?

Visitors drive past a sign welcoming them to Walt Disney World on the first day of reopening of the … [+] iconic Magic Kingdom theme park in Orlando, Florida, on July 11, 2020. – Disney’s flagship theme park reopened its doors to the general public on Saturday, along with Animal Kingdom, as part of their phased reopening in the wake of the Covid-19 pandemic. New safety measures have been implemented including mandatory face masks for everyone and temperature checks for guests before they enter. (Photo by Gregg Newton / Gregg Newton / AFP) (Photo by GREGG NEWTON/Gregg Newton/AFP via Getty Images)

Walt Disney World DIS began their phased reopening July 11 with Magic Kingdom and Disney’s Animal Kingdom Park almost four months of being closed, during which the theme park giant lost an average of $38 million on admissions, hotels, parking, merchandise and food a day. Walt Disney World brought in an estimated $11.2 billion to The Walt Disney Company in the 2019 fiscal year, so making that number or more in 2020 will prove challenging—if not impossible.

Success is a relative term, and even though Disney’s opening weekend had a lot of high points and a few low points, the real test will come when Epcot and Disney’s Hollywood Studios open on July 15, and even more people are able to tour Walt Disney World. Recouping the money lost over the closure that lasted 116 days will mean relying on pass holders and people within driving distance of the resort to come back and feel safe from the new park operations and safety standards.

The theme park opened to guests who secured a park pass through the new park pass reservation system, but the process didn’t go smoothly. People were unable to get their park tickets linked to their Disney account to get the passes, and others were stuck in a virtual queue for hours while parks were running out of park passes.

Another low point for Disney was when they accidentally charged annual pass holders the equivalent of four months of payment at one time. This led to people having hundreds of dollars unexpectedly taken out of their bank account and some even getting charged overdraft fees. 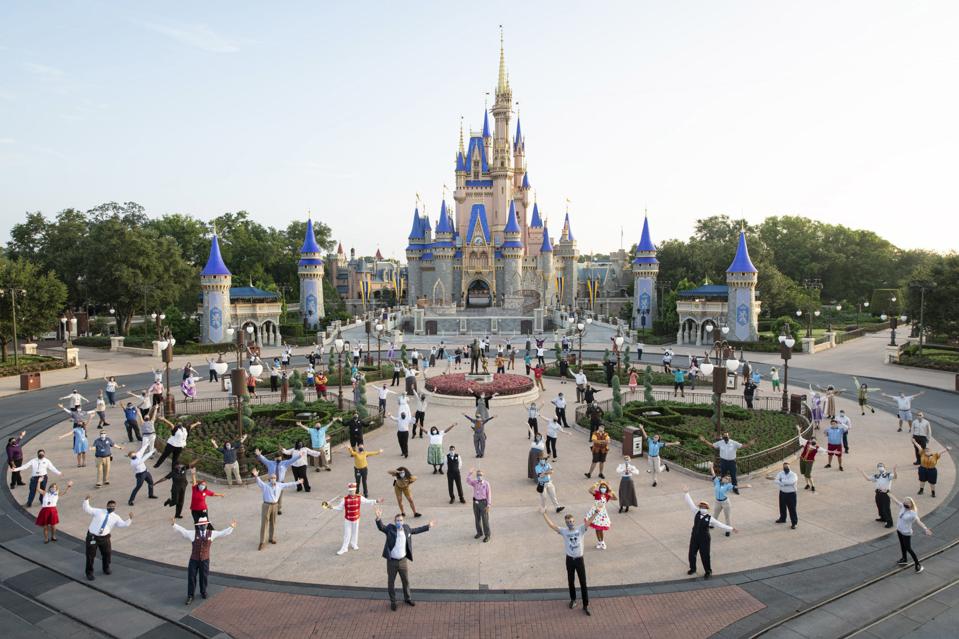 When the parks did finally open the morning of July 11, both Magic Kingdom and Disney’s Animal Kingdom were visited by Bob Chapek, CEO of The Walt Disney Company, and Josh D’Amaro, Chairman, Disney Parks, Experiences and Products, who welcomed back cast members (Disney lingo for employees) and guests as both parks opened. Disney has been widely criticized for opening in the middle of a pandemic with coronavirus numbers in Florida skyrocketing.

While Disney does not announce attendance numbers for any of their theme parks across the globe, as of opening morning there were still park passes available for both Magic Kingdom and Disney’s Animal Kingdom. This shows that attendance was not at its maximum. While that’s not good news for the House of Mouse, it did mean guests were able to enjoy rides with little wait and lots of extra room in the parks to follow social distance guidelines. For the most part, maintaining social distance was easy with walkways inside Magic Kingdom and Animal Kingdom being less crowded than a grocery store aisle.

While the majority of park operations were smooth, one glaring error was selling tickets at the entrance outside of Magic Kingdom first thing in the morning on reopening day. Lines for tickets were long, with dozens of groups in line waiting to purchase tickets. This impacted walkways to and from Disney’s Contemporary Resort, and did not allow for social distancing measures to take priority. This is something Disney will need to change, especially as more travelers look to travel to the parks in the coming months. Disney is pushing people to buy tickets online before arrival, which start at $109, which could become a temporary relief to long lines outside of parks. 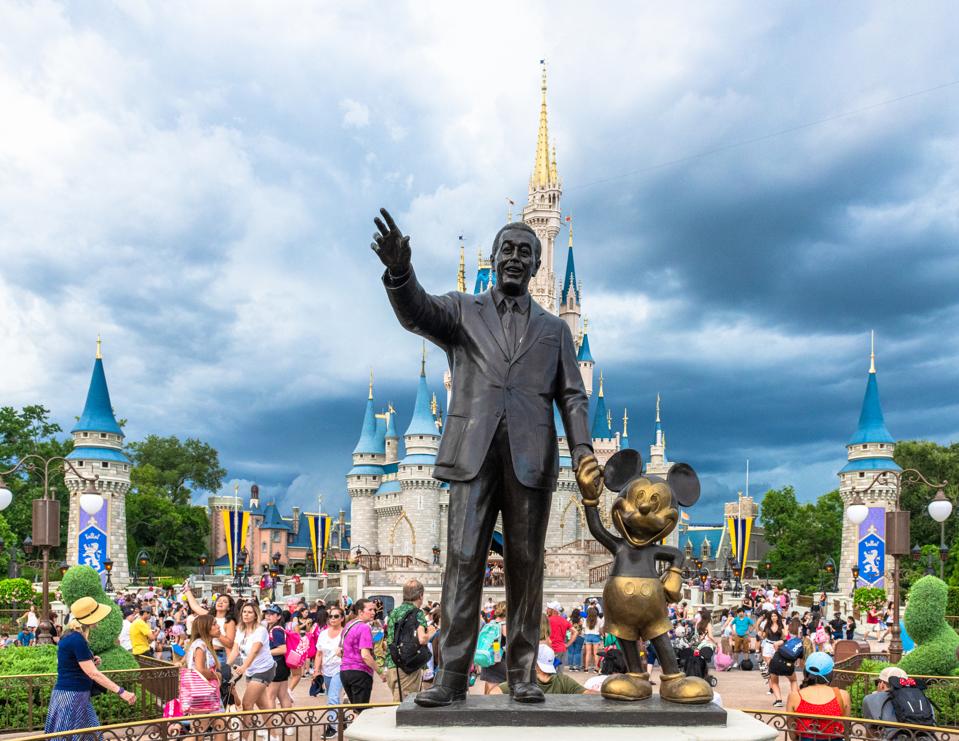 ORLANDO, FLORIDA, UNITED STATES – 2019/07/17: Walt Disney and Mickey Mouse statue inside of the … [+] Magic Kingdom theme park . The Cinderella castle can be seen in the background. (Photo by Roberto Machado Noa/LightRocket via Getty Images)

Once inside the park, cast members were welcoming guests back by saying things like, “Welcome home,” and, “We missed you.” Overhead announcements throughout the park reminded everyone to wear a face covering that covers your nose and mouth, wash or sanitize hands often, and maintain at least six feet between you and the people next to you.

Attractions have been impacted, but for the better, with the addition of plexiglass barriers in queues, social distancing reminders and indicators on the ground, and hand sanitizer at the entrance and exit of each ride. Some attractions like Haunted Mansion that have pre-shows where people are packed in have been modified to skip the pre-show. Once up to the load area, people are loaded into each ride vehicle with social distancing measures in mind, including skipping rows or skipping ride cars between parties. 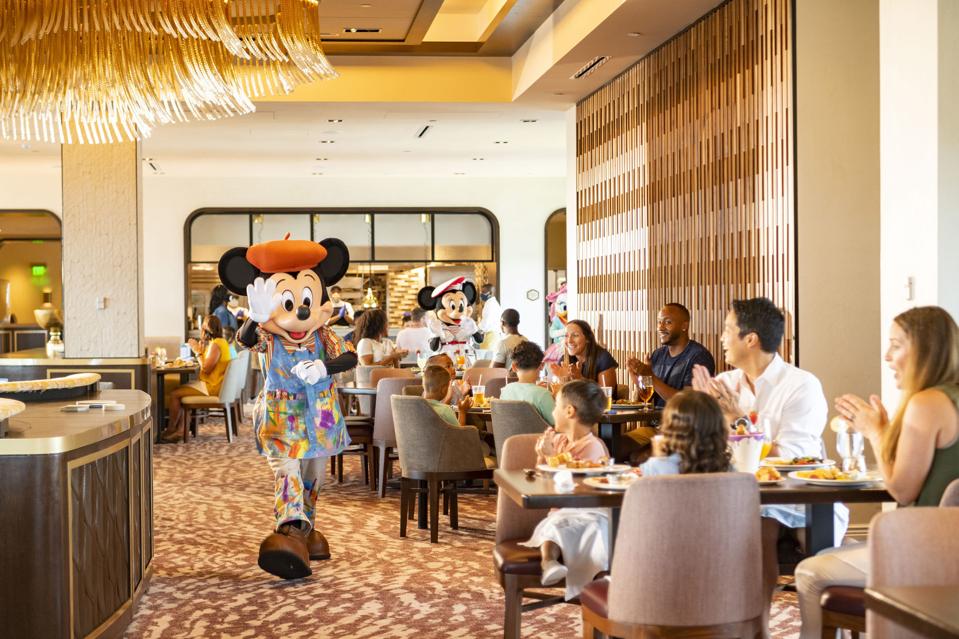 In terms of dining, many restaurant menus have been parred down to only have guest favorites, or cheaper items due to the increasing price in meat around the country. Tables across restaurants are socially distant to accommodate the CDC guidelines; there are fewer tables available at any one time making dining reservations across Walt Disney World at a premium. This is especially true for popular places like California Grill at Disney’s Contemporary Resort, Be Our Guest Restaurant at Magic Kingdom, and Topolino’s Terrace at Disney’s Rivera Resort. While it’s a win for Disney that it was able to open most restaurants, the limited menu could be a hindrance. Time will tell more of this story as Epcot and Disney’s Hollywood Studios begin to open with limited table service dining options and a full Epcot festival on July 15.

Anyone trying to get a selfie with Mickey Mouse will notice that it’s near impossible to do so. Characters are not readily available for anyone to get up close. Instead Disney characters will make their way through the parks on character cavalcades and in surprise appearances at a distance, which has been a major success in the eyes of park goers. All of the character appearances are unscheduled to avoid large crowds like parades would do in the past at Walt Disney World.

In 2018 Disney made $7.2 billion in total admission revenue at its domestic and international theme parks, according to the company’s annual report, and even getting back up to that number in 2020 could prove to be a challenge. This delicate house of cards relies on everyone playing their part, from cast members, to guests, and third party operators. With what was seen and experienced opening weekend, Walt Disney World’s reopening had a mostly successful opening, even with some downfalls that can be adjusted as the parks continue to operate.

The Fastest (and Cheapest) Way to Beat Your Competition