Breaking
In The Race To Retail Dominance, Customer Service...
Meet Onesimus, The Enslaved Man Who Saved Boston...
How to Build a Sales Forecast Model
The Unexpected Ways COVID-19 Has Forever Changed What...
Google Posts: Conversion Factor — Not Ranking Factor
How To Bring Your Branding To Life
Coinbase Cofounders And Investors Poised To Rake In...
How To Stay Top-of-Mind For Your Audience With...
Employers: Eight Red Flags You May Not Notice...
The benefits of videoing in the automotive industry
Ted Lasso, Other Apple TV+ Shows Arriving Soon...
How To Incorporate Click And Collect Into Your...
What Are Working Capital Loans and When Should...
The 10 Biggest Trends in Entrepreneurship to Look...
Clubhouse Has Grown 10X In Two Months. Here’s...
Here’s Why Tyson Foods Stock Looks Undervalued At...
Home Business ‘WandaVision’ Episode 1 Recap And Review: A Crackerjack Series Premiere
Business 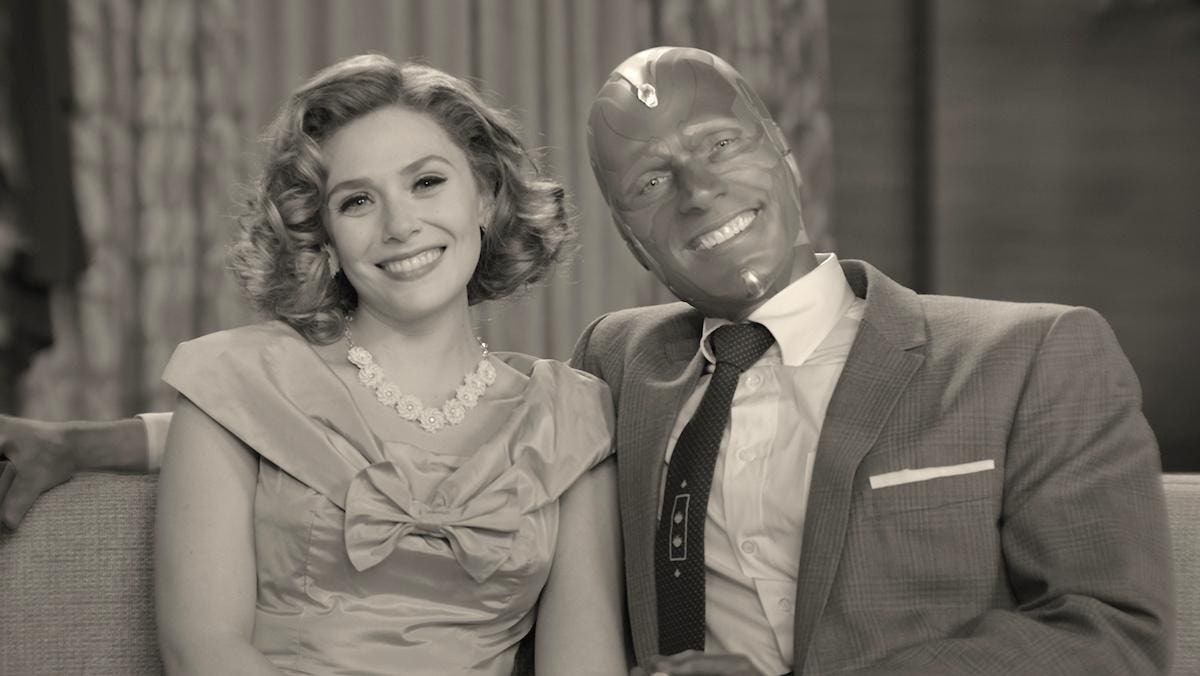 My biggest takeaway after watching the first two episodes of WandaVision on Disney+ is that it’s much, much funnier than I expected.

Maybe that’s just because it’s my brand of humor. Raised on I Love Lucy, Gilligan’s Island, the Andy Griffith Show, the Dick Van Dyke Show and MASH, this type of sitcom humor ticks all the right boxes. The fact that WandaVision does it so gosh-darned well makes it even better.

I had sort of expected a bit of this, and the accompanying weirdness, but I didn’t expect it to work so well. It’s really a crackerjack show, by golly.

In the opening episode we simply don’t know what’s going on. Wanda Maximoff (aka Scarlett Witch) played by Elizabeth Olsen and Vision (Paul Bettany) show up in a black-and-white neighborhood and move into a house together. They slip right into a 50s sitcom rhythm, cracking affectionate jokes replete with a laugh track. It’s adorable.

Wanda is a housewife who can cook and clean with the powers of her mind. Vision, donning his Paul Bettany person skin, heads off to an office job where they do computational work. Nobody there can really pinpoint what that means or what it is the company actually does, but Vision is a big hit there. A co-worker says he’s like a human computer, an affront which Vision takes a bit too literally.

The jokes keep cracking and they all land the mark. The episode turns into a classic case of miscommunication. There’s a heart on the calendar and neither Wanda nor Vision can determine what it’s for. Wanda assumes it’s their anniversary after ruling out birthdays and holidays, and along with her new, overbearing but entirely friendly neighbor Agnes (Kathryn Hahn) they prepare for the romantic evening.

At work, Vision’s boss Mr. Hart (Fred Melamed) reminds him that Vision is hosting him and his wife, Mrs. Hart (Debra Jo Rupp from That 70s Show, which is fitting) for dinner that night. The heart on the calendar was an abbreviation for Hart, not anniversary.

When Vision shows up with his boss and boss’s wife in tow, the house is all set up for a romantic night for two. Candles on the table, lights dimmed low. The only food? A single chocolate covered strawberry (Vision doesn’t eat food, after all). Vision heads into the kitchen to find his wife but Wanda comes out from another room and puts her hands over Mr. Hart’s eyes, mistaking him for Vision.

She’s dressed in a lacy shift with fur cuffs and a pearl necklace and it’s all very risqué for company. The Harts—and Vision—are understandably shocked. Vision tries to pull it off like it’s a traditional European greeting, telling them that Wanda is from Europe, and they seem to bite.

But there’s still no food. So Wanda goes to Agnes for help and of course Agnes has plenty of extra food to spare. Lobster, steak, the whole nine yards. But things keep going wrong, in true sitcom fashion. After Wanda ushers a reluctant Agnes out the back door, she goes to work trying to cook everything at once using her telekinetic powers. It doesn’t go well. The lobster flies out the window. Pots boil over. The chicken burns and she tries to reverse it and ends up with a basket of eggs. Maybe keeping Agnes around would have been a better idea.

Meanwhile, the Harts are positively famished. Mrs. Hart keeps trying to go help in the kitchen, and Vision is forced to distract her by singing the song he heard playing at work: the old Coaster song, “Yakety Yak.”

He’s just in time, too. Mrs. Hart opens the blinds to the kitchen and only just turns away in time to miss the myriad floating pans and cookware.

In the end, after a grating sing-a-long (Old MacDonald Had A Farm) Wanda improvises and makes brinner. That’s breakfast for dinner, which is always good.

They sit down to eat and things get weird. Things get weird right away. Mrs. Hart asks a series of basic, mildly prying questions. Where did they meet. When did they get married. Why did they move . . . wherever “here” is.

And Wanda and Vision are both completely stumped. When did they get married? Why don’t they have rings? Why did they move . . . here?

Mr. Hart gets frustrated. He starts slapping the table. He wants answers. And then he chokes on his brinner. And nobody moves. Wanda and Vision stare, worried expressions plastered to their faces. Mrs. Hart just keeps saying over and over again “Stop, stop it, stop, stop it, stop” and so on and so forth, while laughing nervously, a huge forced smile on her face.

It is deeply, deeply creepy.

Finally Mr. Hart just keels over onto the ground, snapping Wanda from her reverie. “Help him, Vision,” she says.

And Vision hops down to the ground, reaches through Mr. Hart’s chest and removes the obstruction. He helps Mr. Hart up. Instead of being upset, Mr. Hart is unruffled. He glances at his watch and says “Would you look at the time!” and the laugh track kicks on. The famished couple has barely touched their food, but off they go.

“I’m very impressed with you,” Mr. Hart tells Vision. “Monday morning we’ll have a chat about that promotion!”

Wanda and Vision sit down on the couch. They’re confused. Why don’t they have an anniversary or rings? Why don’t we make this our anniversary? Vision suggests. And Wanda can make them rings. So they do and she does. They’re the picture perfect couple. Lucy and Ricky. With superpowers and no memories.

The camera pulls out to some fake credits and then out of the black and white world altogether and we see somebody, some mysterious figure, in some type of control room monitoring the episode on a small screen. The plot, as they say, she thickens!

MORE FROM FORBESEverything Coming To Disney Plus In January, Including WandaVisionBy Erik Kain

All told, this was a fantastic, creative, humorous, and super strange series premiere. I wasn’t excepting to laugh so much. Both Elizabeth Olsen and Paul Bettany do a fantastic job, but Bettany really steals the show. He’s just hilarious (and even more so in the second episode).

I also love the mystery. What on earth is going on here? The last we saw of Scarlett Witch and Vision, Vision died. Thanos killed him, and unlike most of the rest of the world killed by the Snap, Vision was really, truly dead—one of just three (by my count) who wouldn’t make it back after the Titan was brought down.

So my guess is this: Vision is dead. He’s still dead and what we’re seeing play out—which is clearly not real, not the 1950s—is all in Wanda’s head. The question is why and how and who’s involved. Okay, the questions. Lots of questions, no answers yet. Eight more episodes after this one to figure that out.

What did you think of WandaVision’s series premiere? Let me know on Twitter or Facebook and thanks for reading!

How To Move From An Office To A Co-Working Space

Why Does The Chancellor Refuse To Help The Forgotten 3 Million?