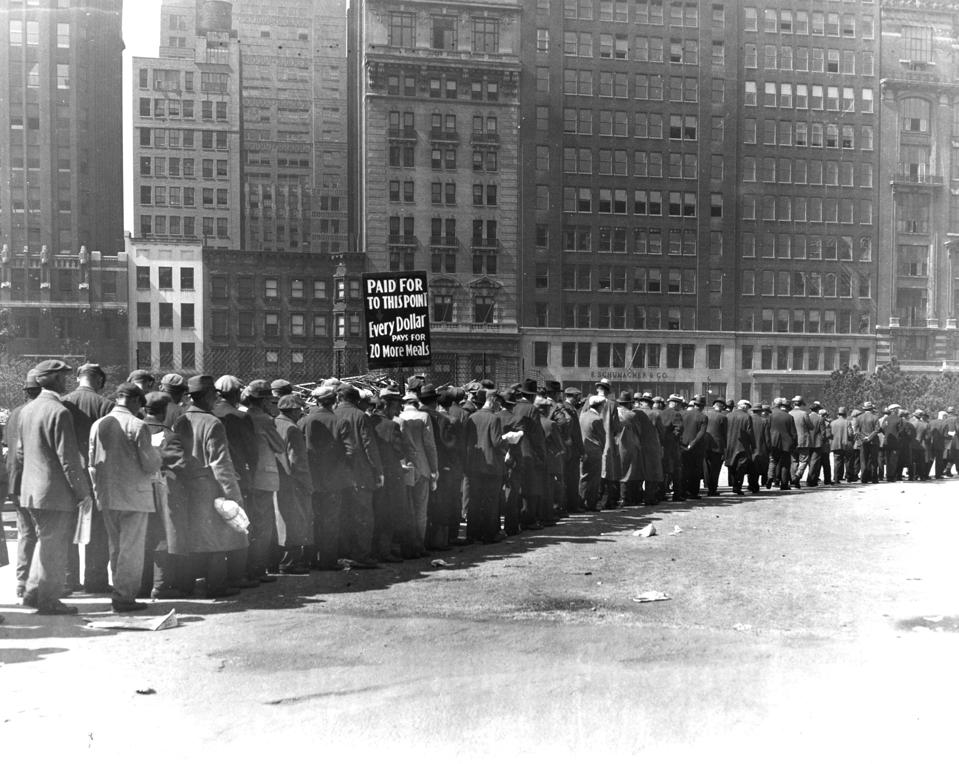 Every Econ 101 student is taught that, fundamentally, the origin of the Great Depression, which traces back to 1929, was the loss of the world’s confidence in U.S. leadership of the global economy—especially as the champion of open international trade among nations. Alas, almost 100 years on, Washington is at it again.

It is hardly a secret actions taken by Mr. Trump set a record among previous oval office occupants for protectionist policies (despite his Wharton degree in economics), especially imposing a swath of tariffs on goods the U.S. imports from China. Less well known, however, is several members of Congress are forcefully pushing legislation that, if it were to pass, would have the U.S. withdraw from the world’s trade-enhancing entity the country long ago stewarded precisely to help prevent another Great Depression. (Mr. Trump also has called for such a move on several occasions.)

In fact, one of those members, a Republican freshman senator—Josh Hawley from Missouri—initially proposed in a New York Times op-ed we abolish the organization. That entity is, of course, the Geneva-based World Trade Organization (WTO), today comprised of 164 member states, who comprise 98% of the world’s trade and act by consensus to both set rules for international trade and oversee members’ adherence to them.

A few days after writing his op-ed, Mr. Hawley’s Yale Law School degree must have kicked in when he realized the U.S. cannot terminate the WTO; we can only withdraw from it.

Not surprisingly in light of both the President’s repeated trade policy actions and now those of the Congress, worldwide confidence in U.S. economic leadership has eroded palpably—arguably to a level not seen since the 1930s.

Initially stemming from the New York stock market crash in 1929 and ensuing banking panics across America, a smoldering deep recession in the U.S. ignited globally after Washington approved legislation introduced the same year and enacted by President Hoover in 1930 that dramatically hiked U.S. tariffs on imports and emboldened other nations to reciprocate. That law, The Tariff Act of 1930, was co-authored by a Republican Senator from Utah, Reed Smoot, and a Republican House Representative from Oregon, Willis Hawley, and is commonly referred to as “Smoot-Hawley.”

If you did a double take about the coincidence of two Hawleys championing legislation to constrain open international trade you are not alone.  While apparently unrelated by blood, the present-day Hawley may well earn the same reputation as the one who is no longer with us.

In the aftermath of the Smoot-Hawley tariff law, protectionism on a worldwide scale did its magic: the flow of trade between countries precipitously shrank, pummeling consumption, business activity, employment, and prosperity across much of the globe for more than a decade.

From the ashes of that economic crisis, world leaders collectively established in 1947 the precursor organization to the WTO—the General Agreement on Trade and Tariffs (GATT)—with the U.S. both steering the process and serving as the most ardent articulator of the GATT’s core principles, namely to conduct trade on market-driven terms and according to a common set of rules that obligate members to abide by national-level policies of trade openness, transparency of procedures, and non-discrimination.

Since that history is so well known, you would think politicians in Washington alive today would not want to undermine those hard-fought gains from all the pain previously endured. Indeed, withdrawing the U.S. from the WTO seems particularly perverse for several reasons.

With our country’s long history in shaping the enterprise, the WTO offers the U.S. the preeminent platform for influencing a dialogue among the membership for change in the rules for international trade. If Washington has a compelling case to make for reforming the organization, which is certainly called for in certain areas, there is no substitute for doing so from the inside. Exiting cedes the WTO ground to China, which is after all the second largest economy in the world. Is that Washington’s hidden agenda?

More urgently, in light of the impact of the Covid-19 pandemic, the current risks to future growth of the world’s economy arguably could not be greater.  Most economies are in the midst of their deepest contraction since the Great Depression.

And, beyond the telltale signs of a pervasive recession—the large number of company closures and bankruptcies, high unemployment rates and shrinking consumer spending—global trade flows have slowed greatly and will continue to do so. The WTO’s latest projections for 2020 indicate the world’s merchandise trade will dive between 13% and 32%.

Does all of this not ring a bell?

Still, do not expect Mr. Trump to stop engaging in protectionist policies. Most recently, he is reportedly working on issuing his third Executive Order instructing agencies to strengthen their adherence to the Buy America Act, this time as it pertains to procurement of medical supplies, a practice similar to what other countries—mostly emerging markets—are doing. Suffice it to say; during a global pandemic, it is hardly wise to distort the free international flow of medicines and personal protective equipment.

Nor is it likely that Mr. Trump will stop calling for our removal from the WTO. More threatening in this regard, however, is the resolution pending in Congress introduced by Mr. Hawley and others. It is particularly concerning because on the House side the two lead co-sponsors are Democrats: Frank Pallone Jr. from New Jersey and Peter DeFazio from Oregon—ironically the same state Willis Hawley represented as a House member.

In the end, one must wonder what is the putative goal of Mr. Trump and the legislators from forcing the U.S. to leave the WTO? It is to rebuild the global economic hegemony of the U.S.

Among Americans, that is arguably a laudable goal. But not only do these politicians have serious misconceptions about how the WTO operates, they have a profound misunderstanding of modern international business and markets.

They believe the WTO is an autonomous organization making decisions on its own. To them, it is the international analog of the “deep state” presumably orchestrating and implementing the agenda of the U.S. federal government in Washington.

We can only suspect they have never visited the WTO. If they did, they would observe how a consensus-based entity driven collectively by 164 countries actually works. (Who knows? They might even become jealous wondering why the Congress cannot operate that way.) Moreover, it would become apparent to them the WTO Secretariat is comprised of 600 professionals of varying nationality and whose budget depends on member states’ contributions.

They will not even have to travel to Geneva to discover they have put stock into the myth the U.S. has suffered at the hands of the WTO’s Dispute Settlement Mechanism. The 2018 Annual Report of Mr. Trump’s own Council of Economic Advisers cites the well-known statistic that the U.S. has won 86% of the dispute cases Washington brought against other countries since 1995. That does not have the feel of a country others have taken advantage of, as Mr. Trump is wont to say.

In fact, the biggest mistake made by the politicians intent on withdrawing the U.S. from WTO is failing to leverage the organization enough. This stems from their fundamental lack of knowledge of how businesses and markets operate today.

One might have thought the all too visible disruptive impact the Covid-19 crisis has had on international supply chains would have been a clue for them that even for some of the most simple products, firms source multiple seemingly mundane components across an array of suppliers located in a variety of geographies worldwide.

Like it or not, tiered global supply chains are a modern reality.  In a word, modern firms conduct business in a market system that is structured multilaterally.  It is thus no coincidence that the WTO—and even the GATT before it—facilitates trade negotiations conducted on a multilateral basis.  While politicians may wish this were 1820, when international trade was largely carried out bilaterally, much to their chagrin, we live 2020.

This is where those advocating U.S. withdrawal from the WTO—and especially Mr. Trump in the way he is conducting a trade war with China—actually should avail themselves of the WTO’s ability to foster collective action. The fact is that the U.S. is hardly the only WTO member who has serious, long-standing grievances about China’s conduct as a trading partner. In other words, China’s trade problem is multilateral. Yet Mr. Trump is intent on dealing with China bilaterally—no doubt, an outgrowth of his entire career focused on structuring real estate transactions.

Although negotiating real estate deals has little in common with negotiating modern international trade agreements, Mr. Trump would be the last to admit his bilateral approach with China on trade has produced little if any tangible results.  But should that day ever come, he would be wise to realize—as I have written earlier in this space—what Beijing fears most is a group of the largest trading partners bringing an across-the-board WTO dispute case against China for its systemic failure to introduce the economic reforms it consented to in its legal WTO accession agreement that paved the way for its admission to the organization in 2001.

In then offering China the stark option of either renegotiating its entire accession agreement or exiting the WTO all together—both cases resulting in China enjoying far less favorable trade terms than at present—Mr. Trump and the rest of his political allies keen for U.S. withdrawal from the WTO may well finally realize that membership in the organization is more than worthwhile.