Home Business Was Chris Sale On A Hall Of Fame Track Before Tommy John Surgery?
Business

Was Chris Sale On A Hall Of Fame Track Before Tommy John Surgery? 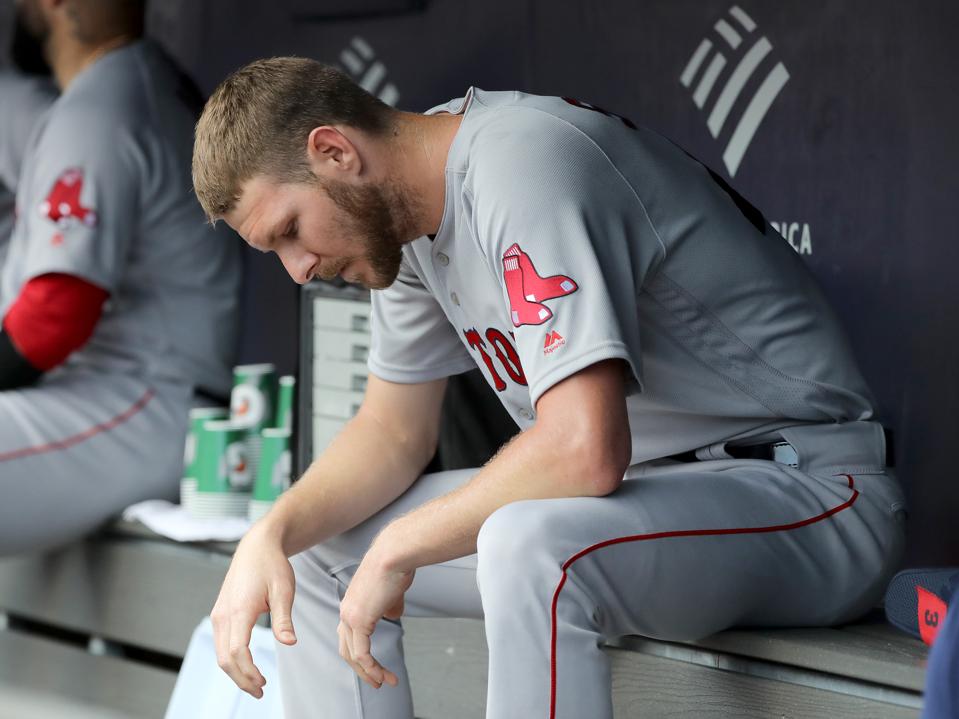 NEW YORK, NEW YORK – AUGUST 03: Chris Sale #41 of the Boston Red Sox sits in the dugout in the … [+] second inning as his team bats against the New York Yankees during game one of a double header at Yankee Stadium on August 03, 2019 in the Bronx borough of New York City. (Photo by Elsa/Getty Images)

Any hopes Chris Sale’s left arm was miraculously bionic disappeared last Thursday, when the Red Sox announced their ace would undergo Tommy John surgery. As is usually the case with pitchers going under the knife, the news was received with far more resignation than surprise. This was particularly true with Sale, who always seemed to be a candidate for a serious arm injury due to his slender frame and violent, whiplike delivery.

But until the summer of 2018, it appeared as if Sale was following in the footsteps of Randy Johnson and Max Scherzer, who both defied expectations and crafted brilliant Hall of Fame and Hall of Fame-bound careers, respectively, despite yearly proclamations from outsiders that their arms couldn’t stand up to the violence of their deliveries.

Alas, July 31, 2018 was also the day Sale hit the disabled list with what was described as a left shoulder injury. He returned Aug. 12, when he allowed one hit and struck out 12 over five scoreless innings, but went right back on the shelf, this time for almost a month. Sale returned Sept. 11 and made four more regular season starts, none longer than 4 2/3 innings. He was mostly ineffective, at least by his standards, during the Red Sox’s World Series run (1-0 with a 4.11 ERA in five games, including three starts) as he shook off the rust and battled a stomach illness, though he got the final three outs of the Game 5 clincher.

Sale never seemed right last season, when he posted a career-high 4.40 ERA while being limited to 25 starts and 147 2/3 innings due to what the Red Sox called left elbow inflammation. Of course, he also struck out 218 — his 211th strikeout of the season, in what proved to be his final start Aug. 13, made him the fastest pitcher to ever reach the 2,000-strikeout milestone, beating Pedro Martinez by 85 1/3 innings — while walking just 37 over 147 1/3 innings, so there was some hope a platelet-rich injection and an off-season of rest would fix whatever ailed Sale. But he reported soreness in his elbow at the start of spring training and threw just once before getting the recommendation to go under the knife.

In the best-case scenario — for both Sale’s recovery and the ability of baseball to return from its coronavirus pause — he’ll be out until at least mid-2021 and unable to assume something resembling a full workload until at least 2022, at which point he will be 33 and a half-decade removed from his most recent dominant and healthy season.

So now the questions are: How far along a Hall of Fame path was Sale, and how much further does he have to travel to establish a firm case for Cooperstown?

Sale’s seven-season peak as a starting pitcher (he made 72 appearances, all in relief, in his first two seasons) is mighty impressive. From 2012-18, Sale went 99-59 with a 2.91 ERA (for an ERA+ of 143, meaning he was 43 percent better than the league average starting pitcher) and a 1.02 WHIP while averaging 5.59 strikeouts per walk and 10.9 strikeouts per nine innings. That was good enough for 39.5 WAR at Baseball-Reference.com. Sale hasn’t won a Cy Young, but placed in the top five in each of the final six seasons of the run. He also made the All-Star team all seven seasons, a streak exceeded only by Juan Marichal, who made eight straight All-Star teams from 1962-69.

But Sale’s numbers are just shy of the standards set by two of his ace peers — Scherzer, whose Hall of Fame case becomes less about a supreme peak and more about an entire transcendent career with each passing year, and Jacob deGrom.

Over the last seven seasons, Scherzer has gone 118-47 with a 2.82 ERA (for an ERA+ of 149) and an 0.98 WHIP while averaging 5.35 strikeouts per walk and 11.3 strikeouts per nine innings. That was good enough for 46.7 WAR at Baseball-Reference.com. Scherzer has won three Cy Youngs, placed in the top five the four other times and made seven straight All-Star teams before adding the one thing he was missing last season by helping the Nationals win the World Series with a gritty Game 7 start.

DeGrom, who famously hit his only collegiate homer off his Atlantic Sun rival Sale, reached the bigs in May 2014 and is 66-49 (remember, the Mets are so freaked out by deGrom’s dominance that they forget how to score when he’s pitching) with a 2.62 ERA (for an ERA+ of 148) and a 1.05 WHIP while averaging 4.72 strikeouts per walk and 10.3 strikeouts per nine innings. That was good enough for 35.5 WAR at Baseball-Reference.com. He’s made three All-Star teams and won the last two NL Cy Young Awards. And while deGrom has a long way to go — he’s only a little more than halfway to the 10-season minimum required for Hall of Fame consideration — every three-time Cy Young Award winner who is eligible for the Hall of Fame is enshrined in Cooperstown except for the steroid-tainted Roger Clemens.

But the Hall of Fame standard for starting pitchers is going to be far different for Sale’s generation than Brown’s or even Santana’s. Brown’s 211 wins ranked eighth among active pitchers when he retired following the 2005 season. Today, he’d rank second, in between sure-fire Hall of Famer Justin Verlander and increasingly likely Hall of Famer Zack Greinke — neither of whom, by the way, have an eight-year span with an ERA+ anywhere near as impressive as the one produced by Brown, whose candidacy likely suffered from his abrasive reputation.

Sale is at 109 wins and 1,629 2/3 innings pitched, so even given the shifting of the electorate to a younger group less consumed with the old-fashioned standards for Hall of Fame-caliber starting pitchers, he’ll surely need to produce at a high level for a handful of seasons following his return in order to build a Cooperstown case.

In this regard, his most interesting peer comps are Felix Hernandez and Adam Wainwright. Hernandez, the former Mariners ace and potential Braves back-end starter if the 2020 season gets underway, went 95-67 with a 2.82 ERA and a 1.14 WHIP while averaging 3.52 strikeouts per walk and 8.7 strikeouts per nine innings during his peak “King Felix” era from 2008 through 2014, a span in which he won a Cy Young Award, placed in the top five three other times, made five All-Star teams and threw a perfect game. Hernandez compiled a WAR of 37.4, slightly below Sale’s WAR from 2012-18.

Even with the modified standards for 21st-century Hall of Fame starting pitchers, Wainwright is almost surely the longest of long shots. While he has 162 wins and a 3.39 ERA (for an ERA+ of 118), he’s 38 years old and in the midst of a gradual and understandable decline (a 4.44 ERA in the last five seasons).

Sale, as we noted, will hopefully be 31 years old the next time he takes a big league mound. He’s probably not going to throw 667 2/3 innings in a three-year span — he didn’t even do that during his peak — but what if he produces a 3.00 ERA over his next 575 big league innings while maintaining something close to his previous strikeout ratios…say, a mere nine strikeouts per nine innings instead of almost 11 whiffs per nine? That’ll give Sale a 3.02 ERA over 10-11 full seasons as a starter to go along with almost 2,600 strikeouts in just over 2,200 innings.

Here’s a full list of the pitchers with a sub-3.05 ERA, at least 2,600 strikeouts and at least 2,200 innings pitched: Walter Johnson, Cy Young, Tom Seaver, Bob Gibson and Pedro Martinez. Of course, among that group, only Martinez (2,827 1/3 innings) threw fewer than 3,000 innings, and Martinez threw more than a thousand fewer innings than the Gibson (3,884 1/3 innings), the only other pitcher in the group with fewer than 4,000 big league innings. But that’s really good company. Let’s hope Sale gets a chance to join it by 2022.

Comedians Are Making New Podcasts While In Covid-19 Quarantine

4 Mistakes To Avoid On A Video Conference

Redefining ‘Empowerment’: How To Unleash Your Employees’ Inner...

In Henri Richard, Hockey Lost The Most Glorious...

Nostalgia Takes Hold As Football Turns Away From...