Breaking
Zooming In – Should SMEs Invest In The...
iOS 14: The Surprising Security Risk Of Sharing...
How A Break From Lord Sugar Changed The...
Sunday’s Google Doodle Is Actually About Google
Office Of The Comptroller Of The Currency Chief...
Source Code For Multiple Windows Operating Systems Publicly...
Why Forgettable Pfizer Really Is A Great Value...
Hot For The Holidays? Amazon Home Drone, Kid...
Best Small Business Loans
The FAAMG Stocks Drive The Markets
Channel Arbitrage And Other Ways Fintech Is Disrupting...
Mall Of America Extends A Hand Of Unity...
Surprise Samsung Galaxy S20 FE Beats Google Pixel...
After Apple And Tesla, Berkshire And Amazon Should...
Is It Wrong To Be Rich In Poor...
‘C&C’ Is 25: How ‘Command & Conquer’ Revolutionized...
Home Technology Waste Has Become An Industry On YouTube
Technology 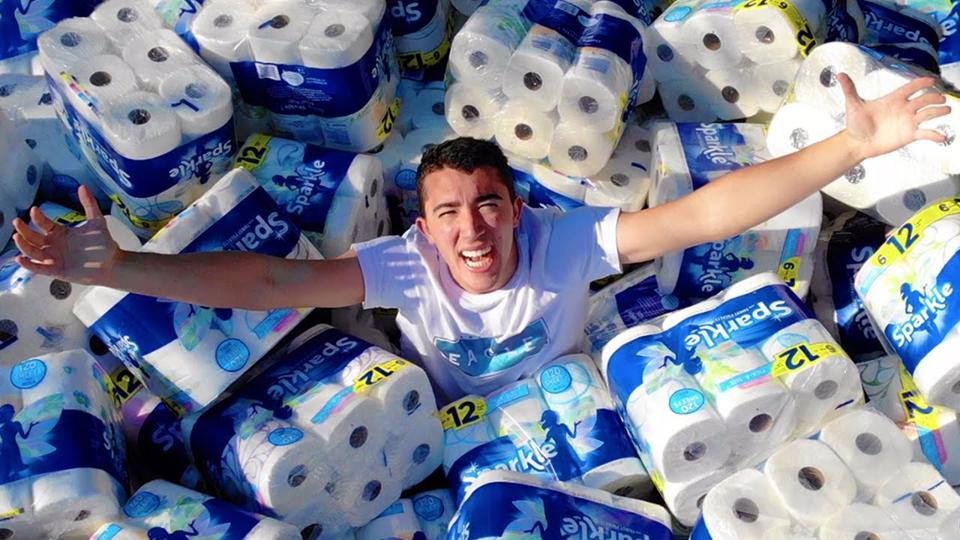 Screengrab of thumbnail from “Can 1,000,000 Paper Towels Absorb A Swimming Pool?”

Last week, Tyler Oliveira, a YouTuber with over half-a-million subscribers, was the subject of the latest scandal on the platform. In the video “Can 1,000,000 Paper Towels Absorb A Swimming Pool,” Oliveira tested his titled hypothesis by chucking thousands of paper towels into his swimming pool, at first, piece by piece, and then throwing entire rolls.

Viewers were quick to criticize the video, highlighting the massive waste involved in its production. Due to their small fibers and oils, paper towels are not recyclable and can ruin an entire batch of recyclable products, according to Business Insider. Instead, Oliveira threw the wet trash into the dumpster and tried to light the entire thing on fire, a widely unpopular move with climate change-induced bushfires running rampant in Australia.

After the social media outcry, Oliveira apologized for the video, stating “This video was a big fat L.” The YouTuber pledged to donate $1,000 to the Australian Red Cross as the organization takes on the wildfires that have destroyed much of the country’s wildlife and released carbon dioxide double the amount of Australia’s total yearly fossil fuel emissions. Although the Oliveira backlash can be seen as YouTube viewers holding creators accountable for their environmental impact, it unfairly implies that the Oliveira video is a one-off outlier for waste and consumption on the platform. In fact, Oliveira’s video is part of a trend of random, excessive consumption by creators on YouTube for views.

Scrolling through YouTube’s home and trending pages, video titles like Oliveira’s aren’t uncommon. With videos like “DROPPING EXPENSIVE THINGS INTO 10 MILLION ORBEEZ!,” “Smashing 30 iPhone’s with a Hammer for Science!,”and “Can 10,000 Condoms Stop A Bullet?” YouTube creators aren’t just being ostentatiously wasteful, they’re bragging about it. And their fans love it.

“There’s something in the human brain that says ‘oh my god, there’s so many of these things. There’s so much of this thing. I’ve got to see that,’” states fellow YouTuber Anthony Padilla in a February 2019 video explaining the allure of these YouTube “junklords.” “Watching someone waste a whole bunch of money doing something ridiculous with a whole bunch of things is fascinating.”

Indeed, we have always been interested in wacky things. In the Guinness Book of World Records, among records for the Youngest Noble Prize Winner and The Tallest Man Ever are zanier ones like records for the Largest Egg Beater and Largest Collection of Beer Bottles. Combine our thirst for the weird with the desire to flex and see others flex on social media, and throwing thousands of paper towels into the pool isn’t worrisome behavior, it’s money-making behavior in a market where this has become the norm.

With climate change and its effects becoming hot-button issues, viewers are turning a more critical eye to what happens to the 10,000 condoms or gallons of slime once the camera is turned off, and creators don’t have good answers. Material is either destroyed in the video or stored to be eventually dumped in landfills and hazardous waste facilities. At best, these videos by “junklord” YouTubers create disproportionate waste. At worst, they normalize this excessive and environmentally-hazardous consumption to their audience.

Nevertheless, “junklord” creators may be starting to have a change of heart. MrBeast a.k.a. Jimmy Donaldson built his following around viral giveaways and challenges that were notable for their expense but also their waste. In October of 2019, Donaldson flipped the script. After goading by fans, MrBreast partnered with the Arbor Day Foundation to fundraise the planting of 20 million trees. Last Christmas, Donaldson flew all over the world to give presents to those in need, including thousands of presents to children at Le Bonheur Children’s Hospital. Actions like these show the promise of excess with purpose and conscience on YouTube, but if viewers don’t demand it, the platform will continue to be a site that exchanges environmental sustainability for views.

Top Black Cannabis Entrepreneurs Cashing In On The $75 Billion Market

Six Predictions For Energy Efficiency, Proptech, Sustainability And More In 2020