Breaking
Looking To Improve Efficiency In Your Business? Here’s...
AI and machine learning for business
How Social Media Changed the World
Shopify: The Pros and Cons
Should your business go green?
Expanding Your Business Into Spain: What You Need...
Essentials For Your Office Coming Out Of COVID-19
What Can Marketers Learn From Digital Cults?
Why NASA’s James Webb Space Telescope Will Never...
Increasing HR Effectivity and Efficiency through Software Solutions
The Difference Between Building A Startup In Bull...
Fluor Corp Ranked Among Today’s Top Shorts
Common Pitfalls to Look Out for When Buying...
Will the Olympics go ahead this year?
Pack Up the Big Top: Insights from MozCon...
Best WordPress Themes for Blogs
Home Technology Watch Bethesda’s Multiplayer Battlemode In ‘Doom Eternal’
Technology 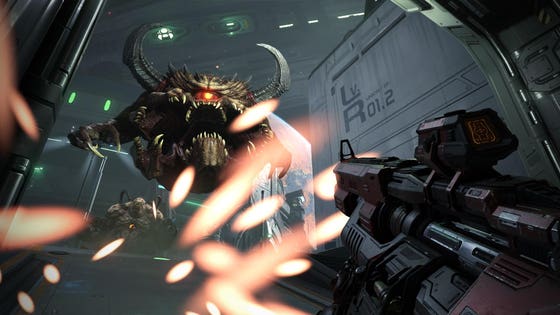 Bethesda and id Software showed off more of Doom Eternal’s new “Battlemode” multiplayer component today at PAX East, and it looks like a fun, complex arena experience. I can’t wait to try it.

Developed in-house by id, Battlemode’s an asymmetrical concept along the lines of Evolve or Friday the 13th: The Game—except you’ve got one Doomslayer pitted against two demons (of which there are various playable options). It has potential to become something unique and highly replayable, especially if they decide to add more variants beyond the initial two-on-one setup.

“We have to respect our audience,” game director Hugo Martin said onstage during the panel. “They’re capable of mastering things; they want a challenge; they want new things to learn and conquer.”

As of this writing, there are five demons to choose from when you’re not the Slayer, including the Mancubus, the Pain Elemental, and the Revenant. Between rounds, players get to choose a new upgrade to add to their arsenal, which all stay with you until the end of the match.

It sounds like one of the design pillars for this new Battlemode game type was to create something streamers might gravitate toward. “What you get a sense of here, too, is how watchable this is,” said executive producer Marty Stratton. “We’ve really made it so that it is something that Twitch streamers, players who like watching games, get a real sense of.”

“We wanted a mode that had a lot of deep strategy, a lot of drama, and varied pacing,” Martin explained. “That’s all things that were lacking from Doom 2016’s multiplayer.”

Eternal drops March 20 on PC, PlayStation 4, Stadia, and Xbox One.

Deaths On U.S. Roads Dropped For Second Year In A Row