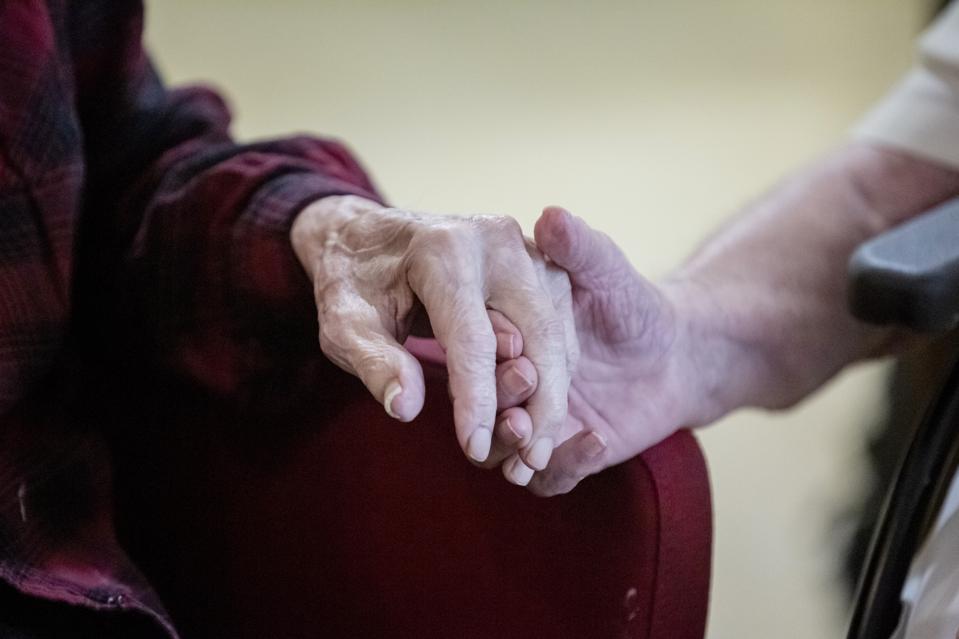 06 September 2019, Berlin: After a group music therapy session in a dementia residential community … [+] in Berlin-Neukölln, which is looked after by the Unionhilfswerk, one resident holds hands. In Germany, the number of people suffering from dementia is increasing. Although the sick forget more and more, music can reawaken certain memories – at least for a moment. (to dpa “Dit one does not forget” – with music memories awaken) Photo: Christoph Soeder/dpa (Photo by Christoph Soeder/picture alliance via Getty Images)

Alzheimers is a devastating diagnosis for people suffering from the disease, as well as their families, but a group of researchers feels that they are one step closer to finding a cure.

Alzheimer’s disease (AD) affects about 5.7 million people in the US and is the leading cause of age-related dementia today. Many people suffering from AD face a myriad of challenges including the lack of effective treatments, reliable biomarkers, or preventive strategies. Unfortunately, several promising drug candidates in the past have failed in clinical trials so researchers are still searching for new preventions or therapies to combat the development of AD. But there seems to be hope with a new vaccine that may proceed to clinical trials after successful animal testing.

A new paper in the journal “Alzheimer’s Research & Therapy” is opening the door for further research in 2020, with medical researchers at the Institute for Molecular Medicine and University of California, Irvine (UCI) working with a successful vaccine formulated on adjuvants(1) developed by Flinders University Professor Nikolai Petrovsky in South Australia.

The causes of AD, in part, are believed to be tied to the role two proteins in the brain;

It is these two proteins that the US-led research team is looking to develop effective immunotherapy for via a new vaccine to remove brain plaques and tau protein tangles.

As explained in the research team’s report, “Alzheimer disease (AD) is characterised by the accumulation of beta-amyloid (Aβ) plaques and neurofibrillary tangles composed of hyperphosphorylated(2) tau, which together lead to neurodegeneration and cognitive decline,” continuing that, “Current therapeutic approaches have primarily aimed to reduce pathological aggregates of either Aβ or tau, yet phase 3 clinical trials of these approaches have thus far failed to delay disease progression in humans.” The researchers contend that “combinatorial therapies that concurrently target both Aβ and tau might be needed for effective disease modification.”

The research teams claims that recent success in their tests with mice supports progression to human trials in years to come, sparking hope in he field. “Our approach is looking to cover all bases and get past previous roadblocks in finding a therapy to slow the accumulation of Aβ/tau molecules and delay AD progression in a the rising number of people around the world,” says Professor Petrovsky.

However, one downside of the potential vaccine is that it could not currently be used as a preventive measure in healthy subjects due to the need for frequent (monthly) administration of high concentrations of immunotherapeutic drugs, which are a class of drugs targeting the immune system to either kickstart or suppress immune function.

However, if future human trials are successful, the new paper concludes that the new combined vaccination approach could potentially be used to induce strong immune responses to both of the hallmark pathologies of AD in a broad population base of vaccinated subjects with high MHC (major histocompatibility complex(3)) class II gene polymorphisms, stating that, “This synergistic model suggests that combinatorial/multi-target therapies directed at the accumulation of both amyloid and tau pathologies may be more effective in the treatment of AD than previously tested unimodal approaches.”