Breaking
Everything You Need to Know About Corporate Social...
Is Adaptive Leadership the Key to Motivating Employees?
Why business events are set to return with...
Business events set to return with a bang!
Expanding Internationally: 5 Things to Consider for eCommerce...
How the Machine Shop Is Going Digital in...
Sustainable Food Packaging Is Helping the Hospitality Sector...
Top 5 Investment Practices To Make More Money...
Managing IT Requirements for SMEs: 5 Aspects that...
How To Build a Successful Luxury Brand In...
Finding The Best Google AdWords Consultant for Your...
8 Top Tips To Help Your Agricultural Business...
Three Reasons Why Office Décor and Design Are...
Looking To Improve Efficiency In Your Business? Here’s...
AI and machine learning for business
How Social Media Changed the World
Home Technology ‘We Need To Give People Hope’ – NASA Announces Three Companies To Return Humans To The Moon In 2024
Technology 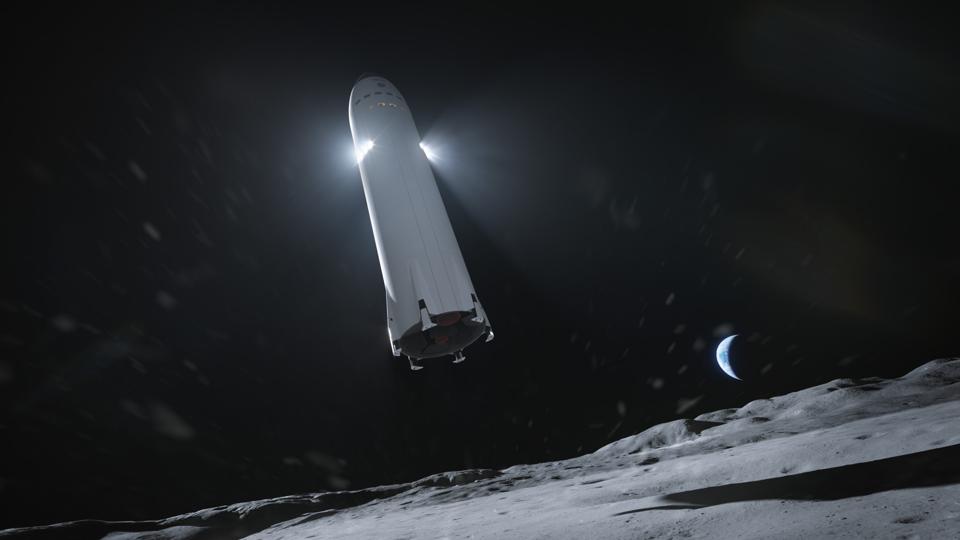 SpaceX’s Starship vehicle is one of the three landers in contention.

NASA has revealed the three companies it is funding to develop landers to return humans to the surface of the Moon, with the goal of landing one woman and one man there in 2024 as part of its Artemis program.

In an announcement today, NASA said it had awarded Human Lander System (HLS) contracts totaling nearly $1 billion to California-based SpaceX, Washington-based Blue Origin, and Alabama-based Dynetics to develop spacecraft that can land on the Moon.

“The United States of America has not had a human landing system since 1972,” NASA Administrator Jim Bridenstine said in a media teleconference. “Today we’re going under contract with three companies that are going to take us all the way to the Moon.”

One of these companies will be picked by NASA to develop their concept for a mission to the Moon in 2024. That mission will see astronauts most likely launch on NASA’s upcoming Space Launch System (SLS) rocket in an Orion spacecraft, before rendezvousing with the lander in lunar orbit.

The funding for each concept covers the 10-month period from now until February 2021, with NASA then deciding which will perform “initial demonstration missions”. At a later date, one of the landers will be picked and funded for the crewed landing mission, which would be the first time humans have landed on the Moon since 1972.

Of the three concepts, Jeff Bezos’ Blue Origin has been awarded the most – $579 million – for its concept as part of its “National Team” along with Lockheed Martin, Northrop Grumman, and Draper. Their design is known as the Integrated Lander Vehicle (ILV), and comprises a three-stage lander.

The descent stage of the lander will use Blue Origin’s BE-7 engines that it has used on its reusable New Shepard rocket on Earth. Lockheed Martin will develop the ascent stage to leave the Moon’s surface, including the crew cabin, while Northrop Grumman will design a transfer stage to reach the Moon based on its Cygnus spacecraft. 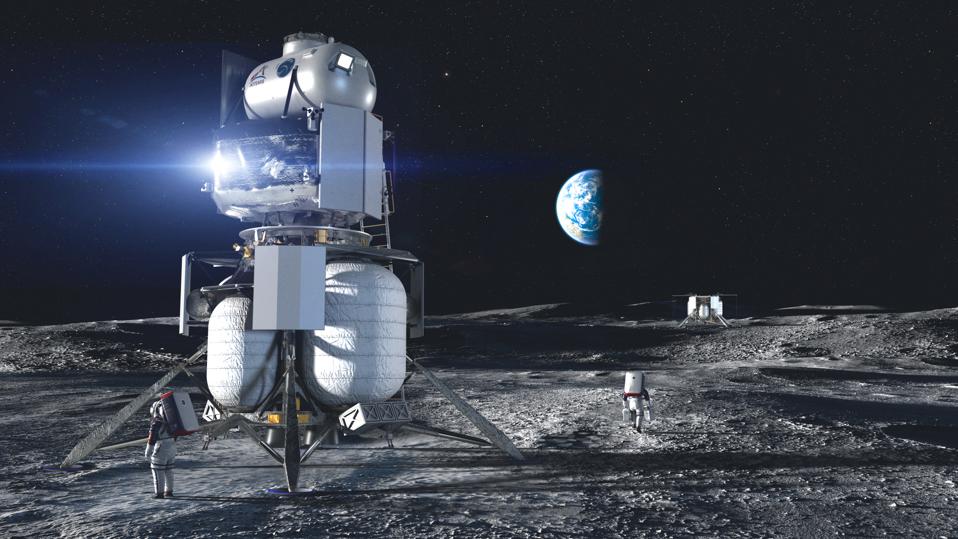 The ILV would be a three-stage vehicle.

SpaceX’s effort, meanwhile, awarded $135 million, would see the company land its Starship vehicle on the surface of the Moon. Elon Musk’s company has been busy developing Starship for missions to the Moon and Mars, designed to be able to land back on Earth at the end of mission.

Multiple Starships could be used to support the mission, with an uncrewed vehicle docking with the lander vehicle in Earth orbit to supply fuel. “The human-rated Starship will launch to the storage unit in Earth orbit, fuel up, and continue to lunar orbit,” NASA noted. 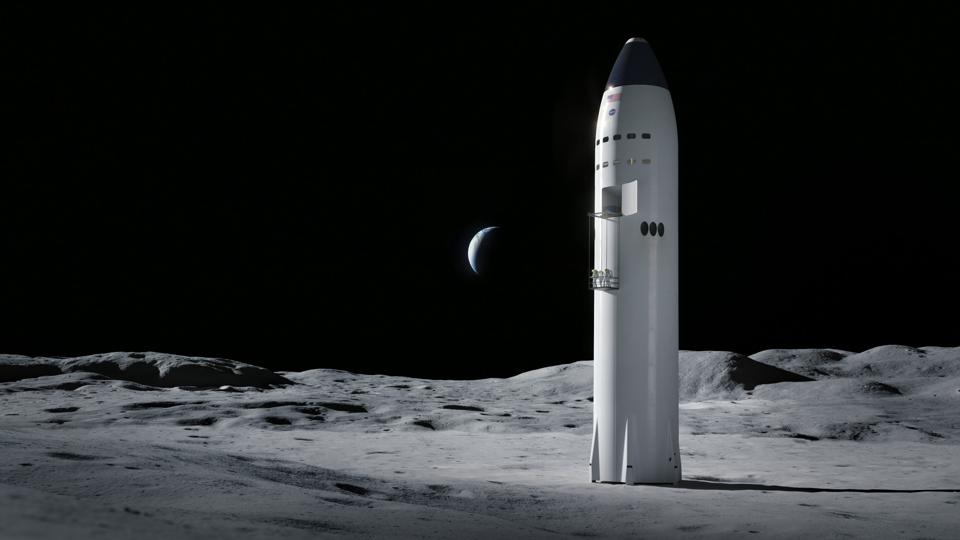 Starship will feature a “spacious cabin and two airlocks”.

The proposal from relatively unknown Dynetics, awarded $253 million, is a single-stage design, meaning the whole system would land and take-off from the Moon. The crew cabin would be close to the ground, giving the astronauts a short hop to the lunar surface.

According to Dynetics the lander would be capable of launching on a number of commercial rockets, with the company not having its own launcher in the works – unlike its competitors, with Blue Origin likely using its own New Glenn rocket, and SpaceX using its upcoming Super Heavy rocket. 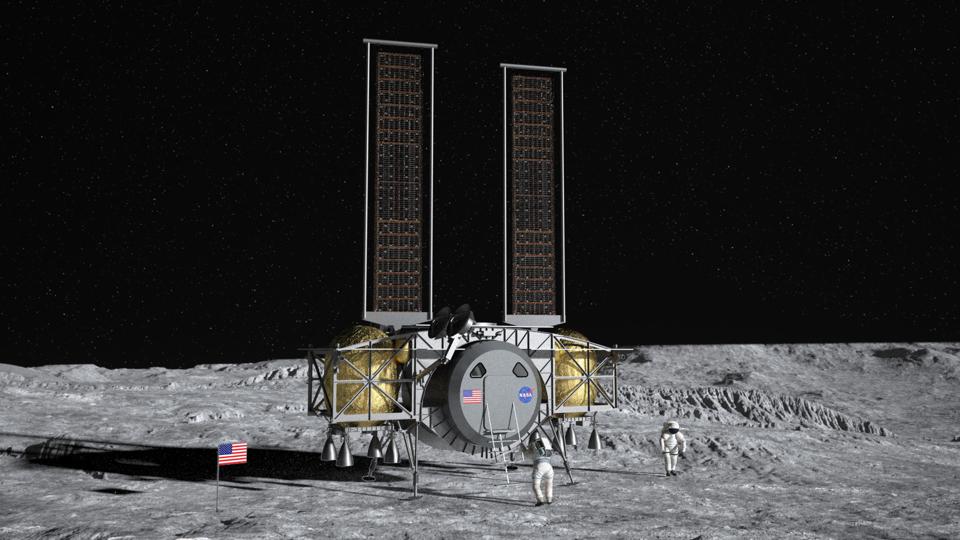 The Dynetics lander would land and launch as a single unit.

Today’s announcement took place despite the ongoing coronavirus pandemic. Indeed, NASA is pushing ahead with many of its operations at the moment, including the planned launch of two astronauts on SpaceX’s Crew Dragon spacecraft on May 27, and now the award of new lunar contracts too.

“It’s important we do this now, because our country and the world has been shaken by the coronavirus pandemic,” said Bridenstine. “We need to give people hope, something they can look up to and dream about. That’s what NASA does.”

Whether NASA will make the 2024 date for a lunar landing is anyone’s guess at the moment, with the agency’s SLS rocket – vital for launching the Orion spacecraft on the mission – still yet to fly for the first time.

The status of the agency’s planned Lunar Gateway meanwhile, designed to orbit near the Moon and support a sustained lunar presence from 2028, remains uncertain. NASA has noted the Gateway was not imperative for the 2024 landing, however.

But for the time being, these three companies now have their work cut out to develop their concepts to return humans to the Moon. And if the Artemis program pays off, one of them will make history in the near-future.