Breaking
Looking To Improve Efficiency In Your Business? Here’s...
AI and machine learning for business
How Social Media Changed the World
Shopify: The Pros and Cons
Should your business go green?
Expanding Your Business Into Spain: What You Need...
Essentials For Your Office Coming Out Of COVID-19
What Can Marketers Learn From Digital Cults?
Why NASA’s James Webb Space Telescope Will Never...
Increasing HR Effectivity and Efficiency through Software Solutions
The Difference Between Building A Startup In Bull...
Fluor Corp Ranked Among Today’s Top Shorts
Common Pitfalls to Look Out for When Buying...
Will the Olympics go ahead this year?
Pack Up the Big Top: Insights from MozCon...
Best WordPress Themes for Blogs
Home Business Weak Defense, Subpar Bench Production Dooms New Orleans Pelicans Against Minnesota Timberwolves
Business 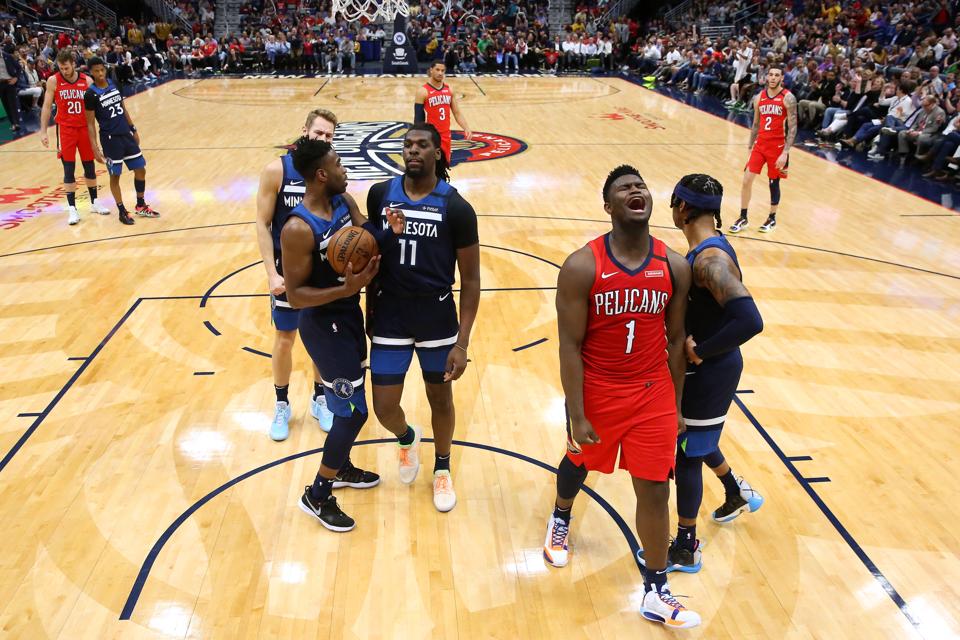 NEW ORLEANS, LOUISIANA – MARCH 03: Zion Williamson #1 of the New Orleans Pelicans reacts against the … [+] Minnesota Timberwolves during the first half at the Smoothie King Center on March 03, 2020 in New Orleans, Louisiana. NOTE TO USER: User expressly acknowledges and agrees that, by downloading and or using this Photograph, user is consenting to the terms and conditions of the Getty Images License Agreement. (Photo by Jonathan Bachman/Getty Images)

The New Orleans Pelicans have kept their playoff hopes afloat mainly through Brandon Ingram’s All-Star level production and the strength of their bench depth. After a tough night against the Los Angeles Lakers, Ingram came through with 24 points on 9-17 shooting, going 3-7 from three-point range. Lonzo Ball, Jrue Holiday, and Zion Williamson all scored more than Ingram. Unfortunately, the lack of production from the supporting cast and an incohesive defensive scheme failed secure a crucial home win against the Minnesota Timberwolves, losing 139-134.

The team is trying to keep pace with the Memphis Grizzlies. In a game where four starters post 24 points or more, the rest of the team has to lock down on defense to secure the win. Sure, Ingram and Williamson are still liabilities in some of their defensive matchups. Still, every player in the starting five shot better than 50% from the field. The New Orleans Pelican should have won this game, and probably would have most nights. This was just another night where all the wrong weaknesses were exposed in the same game.

In regards to the team’s defense, Alvin Gentry said, “I think we got seduced into playing a certain kind of way that wasn’t going to be what we needed to do to try and win the game. They’ve been the best offensive team in the league the last couple of weeks as far as pace, scoring. They scored 145 points on the (Los Angeles) Clippers. We needed to start the game guarding, keeping them out of the paint – we didn’t do any of those things so you let that team out in the open floor, all of a sudden, they’re making shots and then you put yourself in a tough situation.

“(The team) Can’t exchange baskets. We talked about that earlier today. You’re just not in a situation where you can exchange baskets. That’s exactly the way they want to play. They want to seduce you into just running up and down, taking shots, playing that way and we did not guard…Hopefully, this is a game that we understand and we learn from because we can’t afford not to be locked in. We can’t afford not to be into the ball. There were so many bad takes and layups. We didn’t do a very good job defensively.”

Ingram felt something was lacking, saying after the game, “Just the sense of urgency. I think that we weren’t that aggressive on the defensive end to make them feel us every single time down the basketball floor and that’s something we have to get better at.”

Minnesota was missing their best player, Karl Anthony-Towns. The Pelicans had Derrick Favors (26 minutes) and Zion Williamson (32 minutes) on the court. New Orleans lost the points in the paint battle 72-68. Josh Hart and Frank Jackson did little to attack the rim. Jackson hit one of his two free-throws. Hart never made a trip to the line. New Orleans hurt themselves at home by only making 16 of their 27 free-throw attempts. Minnesota made 17 of 20.

The bench points discrepancy stands out on the stat sheet. Minnesota’s five-man bench rotation scored 48 points. The Pelicans got 22 points from Hart (11), Jackson (4), Nicolo Melli (5), and E’twuan Moore (2). Hart had his worst night in New Orleans since entering the league, going 1-9 from deep. He did add five assists and six rebounds through sheer determination, but that has little effect on the outcome of the game. The other three bench players had four assists and six rebounds.

It begs the question: How deep are the New Orleans Pelicans, really? A 12-point lead at home against a team nine games worse in the win column should be comfortable enough to see out the victory. Alvin Gentry only trusts ten players and JJ Redick is out injured for a few more games. The team needs Redick’s shooting but his defense is still suspect. Against Minnesota, too many players looked to avoid contact instead of fighting through screens and risking a foul.

Jrue Holiday posted a triple-double in the loss to the Timberwolves. Lonzo Ball had a career-best night from three-point range, hitting seven of his 10 shots from deep. Zion Williamson has scored 20 or more points in 12 straight games. Offensively, the stars on the team are stepping up at the right time. Defensively, the team is still working things out. Until the time comes, which might not be this season, the bench players cannot switch off if New Orleans Pelicans are to have a chance at a playoff series this year.

The whole team feels like Ingram did after an admittedly bad night against the Los Angeles Lakers a few nights ago. As he said then, “Just let it hurt. I believe everything happens for a reason. Just go back and watch film and see how I can get better. Just think about how I can respond the next time when I get out there.”

Now the whole team is in the same boat going into a road game against the Dallas Mavericks. Williamson will be playing in the back-to-back game situation. Now that he is fully healthy, he must. The team is playing in a ‘must-win’ situation according to Lonzo Ball. The locker room feels the pressure. Now they have to get downright defensive in their claim to being a playoff caliber team.

Microsoft ‘Nightmare’ Login Hack: This New Video Shows How Your Password Can Now Be Stolen

Investing In Unicorns: The Perils And The Promise