Breaking
ESG Metrics: A Path Forward For Companies
‘Moriarty The Patriot’ Makes A Hero Of Holme’s...
Mind The 99 Year Gap: How To More...
The WFH Revolution: How Covid-19 Is Changing The...
eToro Announces Staking For Cardano And Tron
Fintech Startups: Plan For Your Customers’ Emotional Realities
The End Of Third-Party Data — Finally
The Scientologist Billionaire Trying To Make A New...
Mission-Driven Fintech Kontist Shakes Up The Future Of...
What Can The Simple Fact That ‘We Exist’...
Stock Market: Here Comes October With Scary Tricks...
Farmers, College Students, And Food Banks Across The...
Thinking Of Writing A Book To Grow Your...
Microsoft Security Report Highlights New Sophisticated Threats From...
3 Steps To Help You Build Entrepreneurial Confidence
SMB Fintech Darling Kabbage To Be Acquired By...
Home Business We’re Not Biased, We’re Liberals: How Cultural Leftism Will Slant Social Media Regulation
Business

As debates over bias, harm, misinformation and election interference on social media unfold, it will be interesting to watch whether or not mainstream media opposes new rules governing online speech and content, given that the Internet contributes to loss of its traditional gatekeeper role.

Whether or not search results or the presentation of content by big tech firms like Google and Facebook are biased leftward, suspicion prevails that they are. There was even a White House summit about it last July. Online election “interference,” so called, meanwhile seems more likely to get portrayed as something benefiting the right.

Either way, the prevailing sentiment seems to be that misinformation that rises to the level of requiring political redress is something that happens primarily online; an Internet phenomenon as opposed to mainstream media one.

Apart from the President’s missives against “fake news” at CNN and NBC, we don’t see (properly so) the same calls for regulation of mainstream media.

Neither mainstream nor social media speech should be regulated by government, but the apparent one-sidedness of the “pass” for mainstream media has implications for the future of expression if regulators get involved, as Facebook’s Mark Zuckerberg has once again asked that they do.

For example, Nancy Pelosi got upset about an allegedly doctored and selectively edited video of her height-of-decorum ripping up of the State of the Union Address. While by no means a “deepfake,” regulation of such is a rising policy agenda item, and she wanted Twitter and Facebook to remove the video.

Mainstream media does selective editing every day, as anyone who’s ever been quoted or interviewed can tell you.

Big Media’s major institutions like print and broadcast editorial management marinate in left of center perspectives, and this will matter and will pose interesting dynamics for any content regulation like that espoused by Zuckerberg.

Most U.S. journalists support Democrats and policies deemed “progressive, as is their right to do. To their left leaning agenda, though, “misinformation” can be whatever political viewpoints aren’t advancing progressivism and politically correct attitudes.

Neither political party embodies classical liberal ideals, of course, so this is no cheer for Republicans. But since the Washington Post began endorsing presidential candidates major in 1976 (sitting out 1988) it has never endorsed a Republican; similarly the New York Times has not endorsed one in over 60 years. Broadcast news reactions on election night 2016 were as illustrative of the depth of mainstream journalistic support for a Democratic presidential candidate then, as daily cable news and Sunday morning news talk coverage of current political events is now.

NPR recently concluded a fundraising campaign (we need your help to raise $6,000 this hour!) complete with testimonials attesting to its “unbiased reporting.” Yet there are few, if any, controversies over Trump, nor over social issues, on which its hosts and commentators have not made up their minds, generally in favor of whatever increases a federal government role in society.

But it’s OK for them all to do that.

It’s also OK, I guess, that the first 2019 Democratic presidential debate underscored the pro-big-government progressivism of journalists. No moderator asked candidates, “What are you going to do to get government out of healthcare?” That would be a stunner. No; quite the contrary, candidates were actually asked if their plans would extend health care to citizens of foreign countries present in the United States

“This is a show of hands question and hold them up so people can see. Raise your hand if your government plan would provide coverage for undocumented immigrants.” 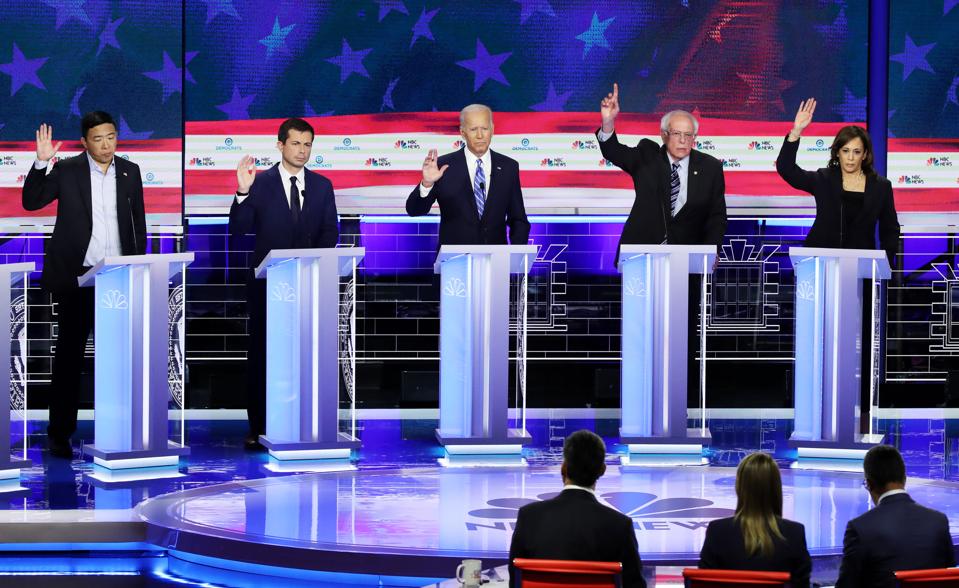 All onstage candidates answered in the affirmative; there is video. Republicans long ago were mocked for saying Medicare would lead to domestic socialism and single-payer, effectively turning America’s doctors into federal government employees, and in turn reliably left of center voters (”free” college, ditto). We somehow arrived in the U.S. to point that media is all-in on non-criticism of socialism. There was no follow-up, “Are you nuts?” question.

Another example of media unity is fatuous, evangelical coverage of a so-called Green New Deal and its financing (the latter may be summed up as follows: When you run out of other people’s money, keep spending anyway).

With one political party is on the verge of nominating one of its socialists, a line has been crossed; a revolution treated as ordinary politics by a saluting media that should have been suspicious and challenging.

The accusation hurled at social media is that it is overly vulnerable to propaganda and influence.

But guess what. Media normalization of socialism for the next generation constitutes “meddling” in and “influencing” elections.

Of course, newspapers already endorse candidates, something conveniently ignored in the social media election influence demand. The New York Times further bucked tradition to “influence” the upcoming election by publishing an anonymous “resistance” op-ed from a purported Trump administration insider. Again, it’s OK for them to do that.

But look at your compass; where we are now? Mainstream election “influence” is OK, but “bad” if social media does it. But it can’t be bad because it’s something different, because influence is old school. It must therefore be bad because social media can potentially, at least so far, come to future conclusions that threaten mainstream ones.

If the latter anecdotes do not constitute improper election influence on the part of mainstream media (and they do not), then neither by extension (barring actual hacking and changing votes) are the other trivial-by-comparison things like “trolling,” advertisements, or other forms of disfavored attempts to persuade that happen online.

As for bots that some in this same campaign wish to regulate, their spewage is not misinformation, nor even information at all. Information on which decisions are based needs to be authenticated, just as even scientific knowledge is seen as tentative. Social media never had a golden age of reliability anyway and government cannot spawn one. But then neither did mainstream media have a golden age: As a recent Babylon Bee headline joked, “CNN to launch real news spinoff site” Bots are more a technological problem than a policy one.

Perhaps the deepest illustration of this problem now is that, despite the handwringing at global confabs over “harm,” “misinformation” and “disinformation,” these categories, tellingly, never include online or mainstream media socialist advocacy.

Despite 20th Century socialism’s “Everest of bodies” of victims, socialist speech is popular and not under threat by those regulators; that myopia becomes the problem when they start to implement law, policy or guidance.

In the U.S. at least, such government regulation would stand in violation of constitutional principles of the protection of the unpopular speech or content (although that’s not much of a barrier after the Constitution’s progressive deconstruction). But global rules will affect speech in the U.S.

Industrial level non-impartiality even makes the “third-party,” “fact check” infrastructure suspect, as its function appears to be that of providing cover for liberals in its framing of events and in the choice of what to fact-check or to simply ignore. Given that, big tech’s promises to pacify policymakers by relying on fact checkers are more a red flag than palliative.

But what does “likely to cause harm” mean, given what we know liberals think their authoritarianism is harmless?

Twitter’s policy could be an excellent one, and that company alone should set its own policy. But it appears in context of assorted eruptions at social media firms and suggests to some a liberal bias and non-neutrality. These include accusations of contemplated search result manipulation to counter Trump’s travel ban; staff departures and firings allegedly rooted in the holding of unacceptable conservative viewpoints; a controversial dissolution of an artificial intelligence committee after an employee backlash over a conservative foundation head’s taking part; and crestfallen tech executives comforting employees with a “history is on our side” pep talk in an all-hands meeting after the election of Donald Trump.

Biases? Undeniable in some instances, less so in others. These are not the core concern.

The concern is that there are increasing calls, not for self-regulation like Twitter’s version, but external regulation of social media (I discussed versions from the right and from the left elsewhere) while leaving conventional media alone.

Both traditional media and social media should be left alone.

Bias, misinformation, disinformation and similar subjective criteria become public policy issues only when government seeks to regulate content and speech or decide for us what is “harmful.”  A brand new example of the kind of censorship to expect is a recent call by a Democrat in Congress for Google’s YouTube to remove “climate disinformation videos.”

The up-with-socialism videos are OK, though. Those aren’t misinformation or disinformation in need of being added to YouTube’s “borderline content” roster, you see. (Nor, as should be obvious by now, am I demanding that they should be.)

Downstream, the administrative state that would carry out any of the various new directives is every bit as left leaning as mainstream media, academia and allegedly the big tech workforce.

There of course exists no political right not to be offended, nor even to be told the truth, for that matter. Finding that out is each of our jobs.

While I may point out monolithic thinking, Congress needs to protect it. It needs to preserve the right to express newspeak and groupthink, whether it comes from the right or left, or from conventional or newfangled media. We are — or should be permitted to be— independent thinkers who not only can but have an obligation to sort it out. If we literally as beings cannot handle misinformation and propaganda, we shouldn’t be voting in the first place. And that’s preposterous.

In today’s policy climate, mainstream media gets to maintain its biases and proclivities. Will non-conforming social media of the future retain that essential freedom?

With members of Congress and social media companies alike coming out in favor of content regulation, a decision by mainstream media to pile on too would represent quite the challenge for dissident free speech.

This thinking out loud on social media has wound up turning into something of a series; here are other very recent “installments.”

Later we’ll take a look at some of the formulations of those who proclaim to be opponents of “harmful speech,” and present themselves as appropriate arbiters of what gets seen online.