Breaking
Everything You Need to Know About Corporate Social...
Is Adaptive Leadership the Key to Motivating Employees?
Why business events are set to return with...
Business events set to return with a bang!
Expanding Internationally: 5 Things to Consider for eCommerce...
How the Machine Shop Is Going Digital in...
Sustainable Food Packaging Is Helping the Hospitality Sector...
Top 5 Investment Practices To Make More Money...
Managing IT Requirements for SMEs: 5 Aspects that...
How To Build a Successful Luxury Brand In...
Finding The Best Google AdWords Consultant for Your...
8 Top Tips To Help Your Agricultural Business...
Three Reasons Why Office Décor and Design Are...
Looking To Improve Efficiency In Your Business? Here’s...
AI and machine learning for business
How Social Media Changed the World
Home Business What Boeing Aircraft Will Chinese Airlines Buy? US-China Trade War Easing Means Sales Announcements
Business

Boeing and Chinese airlines should announce deals as US-China trade tensions ease under a first phase pact, which calls for China to import a further $33 billion of manufactured goods in 2020 and $45 billion in 2021 compared to 2017. Such goods can include construction equipment, but aircraft are more expensive – and overdue for Chinese airlines. It is unclear how deals may be counted given aircraft production’s long lead time and where Boeing typically receives most cash upon delivery, when the aircraft is ready for export.

Dialogue between Boeing and Chinese airlines slowed as trade tensions intensified. China’s last major Boeing purchase was in 2018, with subsequent possible deals held as negotiating tactics. Now Boeing and Chinese airlines are expected by observes to be broadly familiar with purchase goals, and quickly move through state approval. Some orders may already be listed with Boeing as unidentified, raising the usual question of how reflective trade deal figures are. Nonetheless, Chinese airlines can publicly proceed with business.

The 787-10 should receive its first order from Chinese airlines, which are already large customers for the -8 and -9 variants but have not acquired the bigger -10 variant that is especially popular in Asia. Singapore Airlines was the launch operator and most recently Korean Air ordered the -10 at last year’s Paris Air Show. Asian airlines account for 42% of the -10’s orders.

The -10 variant is the newest and biggest Dreamliner, and also the most expensive with a list price of $338 million versus the $293m price tag for the -9 and $248 for the -8. (Discounts of at least 50% are standard.) The larger price could help China more quickly reach purchase commitment values under the trade pact. 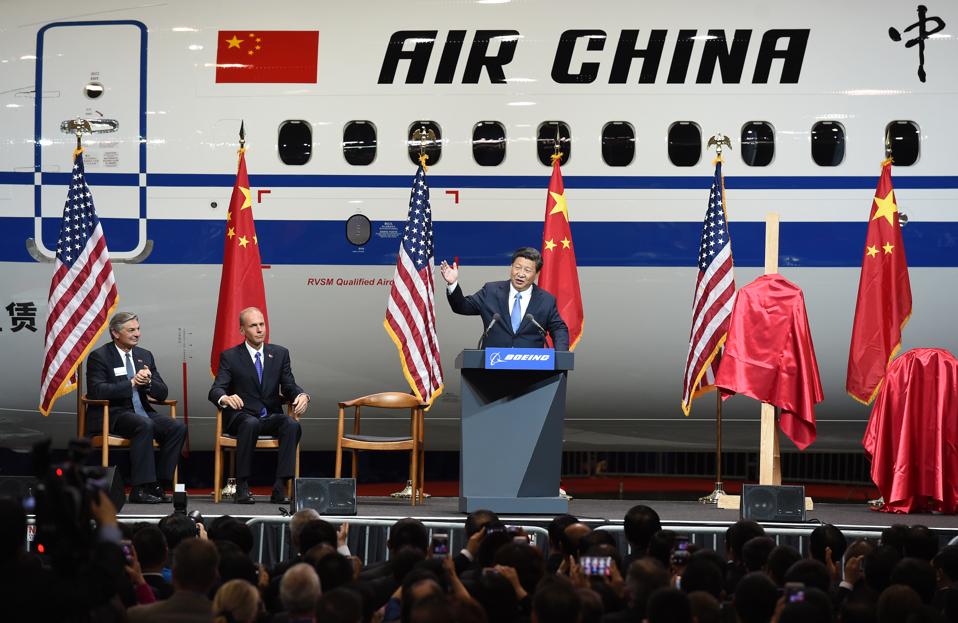 SEATTLE, WA – SEPTEMBER 23: Chinese President Xi Jinping (R) speaks beside Ray Conner (L), … [+] President and CEO of the Boeing Commercial Airplanes and Dennis Muilenburg (2nd L), President and CEO of the Boeing Company, after his tour of the Boeing assembly line on September 23, 2015, in Seattle, Washington. According to state media and it’s local partner, Boeing has reached deals with Chinese firms to sell 300 aircraft and set up a completion center in China, as President Xi Jinping continues his state visit to the United States. (Photo by Mark Ralston – Pool/Getty Images)

Even more expensive with a $442 million list price is Boeing’s new 777-9, still in development and awaiting its first flight. It is a successor to the 777-300ER, which is a long-haul backbone for mainland Chinese airlines. They have 63 -300ERs in service, making -9 sales logical.

But like global peers, Chinese airlines are evaluating how much to rely on large twins such as the 777-8/-9 and A350-1000 versus medium-twins that cannot carry as many passengers or freight during peak periods but are easier to fill at decent yields year-round, a consideration for the Chinese market that has higher seasonality than others. Chinese airlines are taking informal management advice from strategic partners like Delta Air Lines, which favours medium-sized jets.

As for replacing existing -300ERs, most were delivered in the second half of last decade, so replacements do not need to be ordered too soon. Delivery positions do not need to be secured too early since the 777X backlog is not tight and Emirates recently reduced its commitment for the type. But Boeing would certainly like to lock in commitments. China was discussing a deal for 100 Boeing widebody aircraft last summer, Bloomberg said, but did not provide a breakdown between 777s and 787s.

Although Chinese airlines have many 737 MAX aircraft built and awaiting delivery, they will need to order hundreds more in the medium-term to meet growth projections. But details for a MAX commitment could be more complicated to work out in an initial deal since the MAX has not been cleared to return to service and Boeing has not resumed MAX production. Besides being a factor for new orders, the uncertain MAX timeframe could also impact compensation Boeing prefers to issue via discounts on new orders.

In expectation of China ordering many 737s, Boeing previously agreed to establish a 737 completion and delivery center in China.