Breaking
Poland’s Prime Minister Supports Abortion Ruling, Calls For...
Is A Major IRS Crackdown On Partnerships Looming?
Why You Shouldn’t Worry About PPP Loan Forgiveness...
Don’t Get Out: How To Groom The Next...
The ‘OREOA’ Method: How To Turn An Unhappy...
Protecting Students From Financial Aid Fraud Should Be...
The Top 10 Communication Lessons An Entrepreneur Can...
Women Make Strides In Business Ownership—And Find New...
How To Scale Your Business In Tough Times
New U.S.-Greek Science Technology Agreement Sets Framework For...
Tuesday’s Google Celebrates Stamen Grigorov, Who Discovered The...
How To Have Conversations That Change The World:...
DOL Claimed Need To Keep H-1B Visa Rule...
Zoom Enters Perilous New Growth Phase
Amy Coney Barrett Can Kill Obamacare But Here’s...
Apple’s iPhone SE Beats iPhone 12 Mini With...
Home Technology What Can The Simple Fact That ‘We Exist’ Teach Us About The Universe?
Technology

What Can The Simple Fact That ‘We Exist’ Teach Us About The Universe? 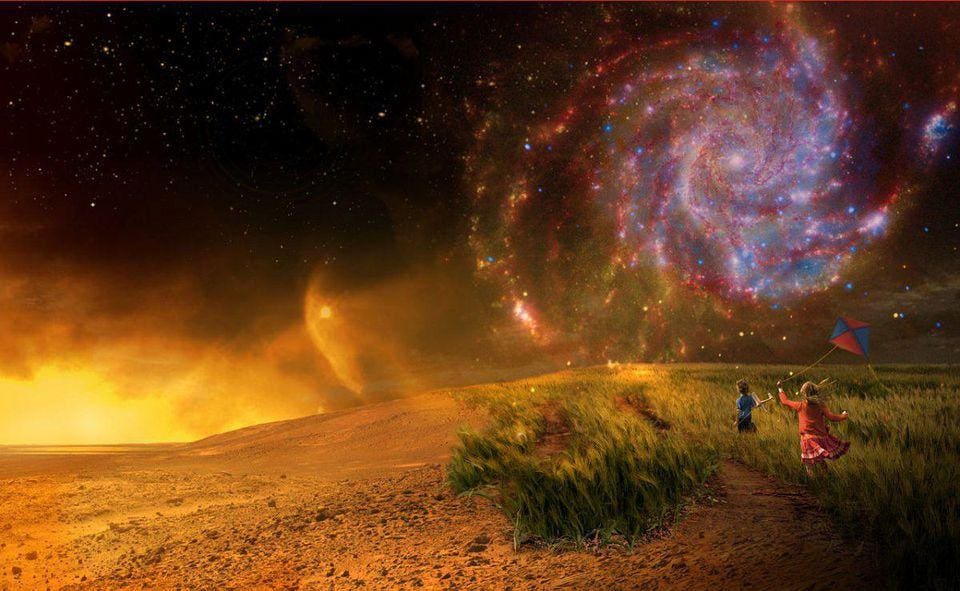 For thousands of years, humans have pondered the meaning of our existence. From philosophers who debated whether their minds could be trusted to provide accurate interpretations of our reality to physicists who’ve attempted to interpret the weirder aspects of quantum physics and relativity, we’ve learned that some aspects of our Universe appear to be objectively true for everyone, while others are dependent on the actions and properties of the observer.

Although the scientific process, combined with our experiments and observations, have uncovered many of the fundamental physical laws and entities that govern our Universe, there’s still much that remains unknown. However, just as Descartes was able to reason, “I think, therefore I am,” the fact of our existence — the fact that “we are” — has inevitable physical consequences for the Universe as well. Here’s what the simple fact that we exist can teach us about the nature of our reality.

To start with, the Universe has a set of governing rules, and we’ve been able to make some sense of at least some of them. We understand how gravity works at a continuous, non-quantum level: by matter and energy curving spacetime and by that curved spacetime dictating how matter and energy move through it. We know a large portion of the particles that exist (from the Standard Model) and how they interact through the three other fundamental forces, including at the quantum level. And we know that we exist, composed of those very same particles and obeying those same laws of nature.

Based on those facts, physicist Brandon Carter formulated two statements back in 1973 that seem like they must be true:

These two statements are known, today, as the Weak Anthropic Principle and the Strong Anthropic Principle, respectively. When used properly, they can enable us to draw incredibly powerful conclusions and constraints about what our Universe is like.

Think about these facts, all together. The Universe has parameters, constants, and laws that govern it. We exist within this Universe. Therefore, the sum total of everything that determines how the Universe works must be allow for creatures like us to come into existence within it.

But we are here. We exist. And therefore, our Universe does exist with such properties that an intelligent observer could have possibly evolved within it. The fact that we are here and that we actively engage in the act of observing the Universe implies this: the Universe is wired in such a way that our existence is possible.

That is the essence of the Anthropic Principle in general.

It doesn’t seem like this statement should be controversial. It also doesn’t seem like it teaches us very much, at least on the surface. But if we start to look at a variety of physical puzzles that the Universe has presented to us over the years, we start to see just how powerful an idea it can be for scientific discovery.

The fact that we are observers made of atoms — and that many of those atoms are carbon atoms — tells us that the Universe must have created carbon in some fashion. The light elements, like hydrogen, helium, and their various isotopes, were formed in the early stages of the Big Bang. The heavier elements are formed in stars of various types throughout their lives.

But in order to form those heavier elements, there must be some way to form carbon: the sixth element in the periodic table. Carbon, in its most common form, has 6 protons and 6 neutrons in its nucleus. If it’s formed in stars, there must be some way to form it from the other elements that already exist in stars: elements like hydrogen and helium. Unfortunately, the numbers didn’t work out.

We know the mass of carbon-12, and the masses of the helium and hydrogen nuclei that are so abundant in the stars. The easiest way to get there would be to take three independent helium-4 nuclei and fuse them all together simultaneously. Helium-4 has two protons and two neutrons in its nucleus, so it’s easy to imagine that fusing three of them together would give you carbon-12, and hence could create the carbon we need in our Universe.

But three helium nuclei, combined, are too massive to efficiently produce carbon-12. When two helium-4 nuclei fuse together, they produce beryllium-8 for just ~10-16 s, before it decays back to two helium nuclei. Although occasionally a third helium-4 nucleus could get in there if the temperatures are high enough, the energies are all wrong for producing carbon-12; there’s too much energy. The reaction just wouldn’t give us enough of the carbon our Universe needs.

Fortunately, physicist Fred Hoyle understood how the anthropic principle worked, and realized that the Universe needed a pathway to make carbon from helium. He theorized that if there were an excited state of the carbon-12 nucleus, at a higher energy that was closer to the rest mass of three helium-4 nuclei combined, the reaction could occur. This nuclear state, known as the Hoyle State, was discovered just five years later by nuclear physicist Willie Fowler, who also discovered the triple-alpha process that formed it, just as Hoyle predicted.

Another time the anthropic principle was successfully applied was to the puzzle of understanding what the vacuum energy of the Universe is. In quantum field theory, you can try to calculate what the energy of empty space is: known as the zero-point energy of space. If you were to remove all the particles and external fields from a region of space — no masses, no charges, no light, no radiation, no gravitational waves, no curved spacetime, etc. — you’d be left with empty space.

But that empty space would still contain the laws of physics in them, which means that it would still contain the fluctuating quantum fields that exist everywhere throughout the Universe. If we try and calculate what the energy density of that empty space is, we get an absurd value that’s far too high: so large that it would cause the Universe to have recollapsed just a tiny fraction of a second after the Big Bang. Clearly, the answer we get from doing that calculation is wrong.

So what’s the right value, then? Although we still don’t know how to calculate it, today, physicist Stephen Weinberg calculated an upper limit on what it could possibly be back in 1987, making astonishing use of the anthropic principle. The energy of empty space determines how quickly the Universe expands or contracts, even apart from all the matter and radiation within it. If that expansion (or contraction) rate is too high, we could never form life, planets, stars, or even molecules and atoms within the Universe.

If we use the fact that our Universe has galaxies, stars, planets, and even human beings on one of them, we can place extraordinary limits on how much vacuum energy could possibly be in the Universe. Weinberg’s 1987 calculation demonstrated that it must be at least 118 orders of magnitude — that is, a factor of 10118 — smaller than the value obtained from quantum field theory calculations.

When dark energy was empirically discovered in 1998, we got to measure that number for the first time: it was 120 orders of magnitude (a factor of 10120) smaller than the naïve prediction. Even without the necessary tools to perform the calculations needed to obtain the answer, the anthropic principle got us remarkably close.

Just a few days ago, theoretical physicist John Barrow died, a victim of colon cancer. Back in 1986, he cowrote a prominent book with Frank Tipler, The Anthropic Cosmological Principle. In that book, they redefined the anthropic principle as the following two statements:

Although these statements might seem equivalent on the surface to the prior ones, they add up to something very different. Instead of contending, as Carter originally did, that “our existence, as observers, means that the Universe’s laws must allow observers to possibly exist,” we now have “the Universe must allow carbon-based, intelligent life, and that hypothetical Universes where that life does not develop are not permitted.”

This highly influential (and controversial) reframing of the anthropic principle takes us from demanding that the Universe must not make it impossible for observers to exist, because we do, to mandating that a Universe where intelligent observers do not arise cannot be allowed. If that sounds like an enormous leap of faith that is not supported by either science or reason, you’re not alone. In their book, Barrow and Tipler go even further, offering the following alternative interpretations of the anthropic princple:

Every one of these scenarios might present a fascinating feast for the imagination, but they all represent incredibly speculative leaps in logic, and make assumptions about cosmic purpose and the relationship between observers and reality that aren’t necessarily true.

You don’t have to look far to find claims that the anthropic principle does any or all of the following: supports a multiverse, provides evidence for the string landscape, requires we have a Jupiter-like gas giant to protect Earth from asteroids, and to explain why Earth is ~26,000 light-years away from the galactic center. In other words, people are misusing the anthropic principle to argue that the Universe must be the way it is because we exist with the properties that we have. That’s not only untrue, but it’s not even what the anthropic principle allows us to conclude.

What’s true is that we do exist, the laws of nature exist, and some of the great cosmic unknowns can be legitimately constrained by the facts of our existence. In that sense — and perhaps, in that sense alone — the anthropic principle has scientific value. But as soon as we start speculating about relationships, causes, or phenomena that we cannot detect or measure, we leave science behind.

That isn’t to say that such speculations aren’t intellectually interesting, but engaging in them in no way improves our understanding of the Universe the way that Hoyle’s or Weinberg’s anthropic predictions did. The simple fact of our existence can guide us towards understanding what certain parameters that govern our Universe must actually be, but only if we stick to what’s scientifically measurable, at least in principle.