Breaking
Meet Onesimus, The Enslaved Man Who Saved Boston...
How to Build a Sales Forecast Model
The Unexpected Ways COVID-19 Has Forever Changed What...
Google Posts: Conversion Factor — Not Ranking Factor
How To Bring Your Branding To Life
Coinbase Cofounders And Investors Poised To Rake In...
How To Stay Top-of-Mind For Your Audience With...
Employers: Eight Red Flags You May Not Notice...
The benefits of videoing in the automotive industry
Ted Lasso, Other Apple TV+ Shows Arriving Soon...
How To Incorporate Click And Collect Into Your...
What Are Working Capital Loans and When Should...
The 10 Biggest Trends in Entrepreneurship to Look...
Clubhouse Has Grown 10X In Two Months. Here’s...
Here’s Why Tyson Foods Stock Looks Undervalued At...
How To Maintain Client Relationships During Long Projects
Home Business What Does EU Possible Ban On Americans Mean For Italy’s Struggling Tourism Sector?
Business

What Does EU Possible Ban On Americans Mean For Italy’s Struggling Tourism Sector? 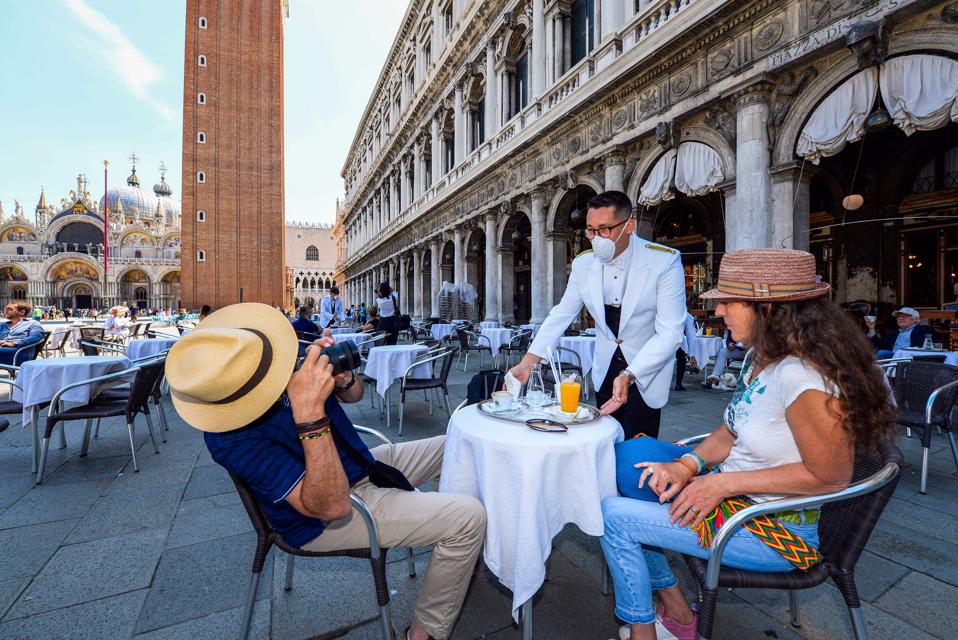 TOPSHOT – A customer (L) takes a photo of a waiter at the terrace of the 18th Century Cafe Florian … [+] on June 12, 2020 on St. Mark’s Square in Venice, which reopens after being closed for three months during the country’s lockdown aimed at curbing the spread of the COVID-19 infection, caused by the novel coronavirus. (Photo by ANDREA PATTARO / AFP) (Photo by ANDREA PATTARO/AFP via Getty Images)

Italy’s tourism industry, which amounts to 13% of the country’s GDP, is already in crisis due to the coronavirus lockdown, and the latest reports of a potential ban on visitors from America and other countries from July 1 will be another unwelcome blow.

The European Union is looking to open its borders on July 1, but is it discussing a continued bar on visitors from the USA and other countries where the COVID-19 emergency is not deemed sufficiently under control, the New York Times reports.

Two potential lists have been drawn up, both of which look to impede entry into the EU for Americans, Russians and Brazilians. China, and other developing nations such as Uganda, Cuba and Vietnam, are reportedly set to be granted entry.

The impact of American tourists in Italy

In 2018, 4.15 million visitors from the USA arrived in Italy, according to government statistics, making it second highest for number of tourists after Germany. France and the UK both come close behind America for arrivals in 2018.

Americans also contributed around €2.8 billion of the €42 billion revenue generated by the tourism industry in 2018, according to financial daily Il Sole 24 Ore.

“A travel ban on American travelers will most certainly impact the tourism industry in Italy,” says Allison Zurfluh, a travel consultant specializing in the Venetian lagoon. “[Italy] is still reeling economically from months of lockdown, and not to mention major festivals, exhibits and Biennali.”

Despite Italy’s borders reopening to some countries on June 3, the tourism sector is on its knees and protests have been staged throughout the country. Rome has seen tour guides gather outside the Pantheon chanting “without tourism, Italy dies” and protesting against the lack of government support for their sector, while in Venice tourism workers held signs saying “We are here” in response to feeling “invisible”.

With Americans being the second most numerous visitors to the country, the lucrative tourism sector looks set for further hardship.

While keeping the borders closed to Americans will be another blow to the struggling tourism sector, official figures show that visitors from Germany far outweigh those from other countries. Their “presenze”, the number of arrivals multiplied by number of nights stayed, was over four times that of Americans for 2018.

From some areas of Italy, the majority of visitors are from the EU, in particular Germany, and the ban on visitors from American and Russia will take less of a toll. Lake Garda, for example, is particularly popular with German and Austrian tourists who arrive by road.

Despite the NYT report calling the ban “a stinging blow to American prestige in the world”, Italy is now negotiating between saving the summer tourist season and ensuring prevention against a second wave of infections.

Alongside health concerns come political battles. On March 14, President Donald Trump announced the closure of US borders to countries in the EU Schengen zone, a move which was criticized by EU leaders at the time.

One positive side effect of limited travel comes in the form of a much-needed break for cities like Venice and Rome who were battling overtourism pre-lockdown.

Tourists are trickling back into Venice, but the streets remain free of tour group traffic jams and locals are reclaiming their city spaces. Residents of Venice, and other art cities, are also taking advantage of reduced crowds to visit their local attractions such as the Vatican Museums in Rome or the Uffizi in Florence.

Italian officials are expected to release their final decision early next week on which countries will be permitted entry to Italy from July 1.