What Every Worried Investor Needs To Know About The Coronavirus Market 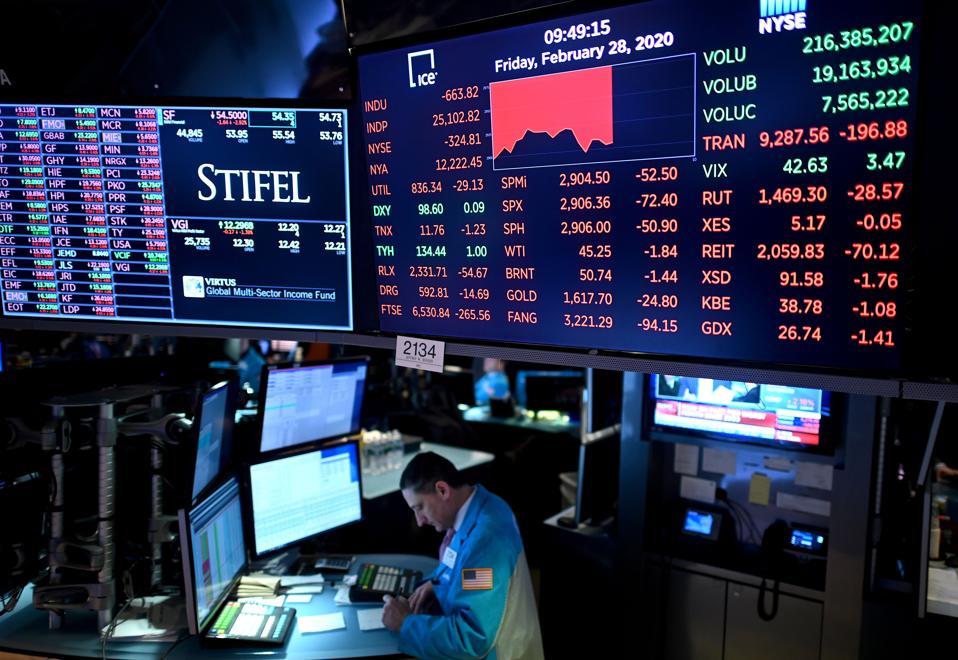 Traders work during the opening bell at the New York Stock Exchange (NYSE) on February 28, 2020 at … [+] Wall Street in New York City. – Losses on Wall Street deepened following a bruising open, as global markets were poised to conclude their worst week since 2008 with another rout. (Photo by Johannes EISELE / AFP) (Photo by JOHANNES EISELE/AFP via Getty Images)

How Should You Invest In A Coronavirus Market?

If you are an investor, no doubt this week’s market action has gotten your attention. Brought on by the Coronavirus, we’re now in correction territory, a broad market decline of over 10%, and that decline was fast and furious — over just 6 trading days.

Is a bear on the horizon?

Of course, only time will tell whether a bear is lurking. After all, we’ve not experienced the Coronavirus before; we don’t know the global effects of the virus on people and businesses; and we don’t know if the Federal Reserve will act alone or in concert with other central bankers and take action, perhaps lowering interest rates.

Should you change direction?

The question is, should you change course as a result of this uncertainty?

If you make your investment decisions based on market movements such as these, you will be in and out of the market without a plan. I would question whether you can make progress. As a general rule, it’s best to ignore interim market moves unless you are a momentum trader, a day trader, or leveraged.

Traders need to be alert to daily and intraday market movements; they need to be both nimble and flexible – and unlike long-horizon investors, they do need to react to what the market is telling them.

As to anyone who is leveraged, the extra risk that is borne needs to be unwound when the market moves against them. The idea is to act from “risk on” to “risk off” when appropriate. But what about the average everyday investor?

Are you a self-directed investor?

From my perspective, with decades-long professional experience in the financial markets, I can tell you that individuals who invest their own money by themselves have an additional issue to deal with when markets roil: the investor’s conflict (wanting what is not possible — namely, high returns at no risk).

That conflict can drive investors to try to predict where the market is headed, a fool’s errand.

Say you turned 25 in March of 2000, when you first started investing through your 401(k). “Your market” started at a peak when the S&P 500 Index hit a high of 1,527. You would have experienced the next bull market of October 2002 through October of 2007, as well as the following bear that ended in March 2009, followed by the current bull.

In the second case (turning 25 in 2002, the bottom of a bear market), you would have had a return of about 10 percent (here there was no meaningful difference between a single investment versus monthly investments).

Your experience as a stock investor is range-bound by the historical period of time in which you are living.

The market’s boundaries are flexible and can be erratic and emotionally taxing over short periods. But stand back, and from a distance you’ll see a different story: No matter what historical market period you find yourself in, you OWN that market — it’s yours. Get to know what it can do for you.

If you are retired, you might be interested in reading “7 steps for retirees to ride out volatile markets.”

Why There Is Retracement In Oil Price? Can...

Is China Threatening America’s Dominance In The Digital...