Home Business What If The Democrats Held A Debate And No One Attended? California May Soon Find Out
Business

What If The Democrats Held A Debate And No One Attended? California May Soon Find Out 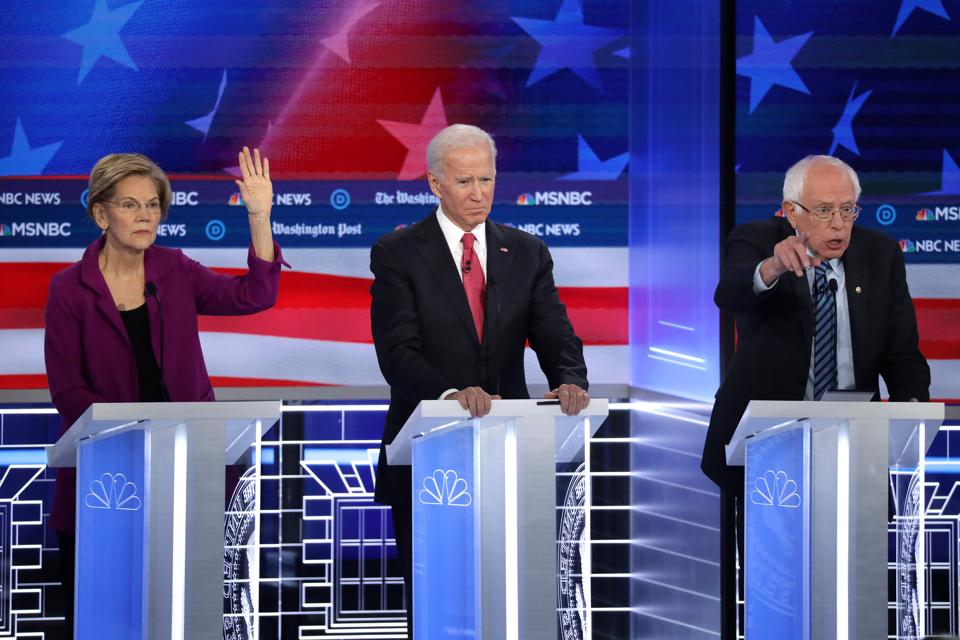 To the age-old question of the falling tree, the forest and what if any sound exists, I give you this week’s Democratic presidential debate in Los Angeles.

That debate, the sixth such gathering of Democratic hopefuls this year and co-moderated by PBS and Politico, is supposed to go down this Thursday at Loyola Marymount University, which is just north of Los Angeles International Airport and not far from the ocean.

But that was before a local labor union dispute messed with the proceedings – ironically, labor pains also being the reason why the debate was relocated to LMU from the UCLA campus a few weeks ago.

The problem for Democrats: Unite Here Local 11, a union representing cashiers, cooks, dishwashers and service workers at Loyola Marymount, says it’s at an impasse with the company the university contracted to provide food service operations – a picketing that dates back to this spring.

Once union officials contacted the seven presidential candidates invited attend as to what their intentions were this Thursday – i.e., cross a picket line and risk incurring the wrath of Big labor beyond the California state line – the candidates made it clear they wouldn’t cross the line.

And that puts the Democratic National Committee, which claims it had no knowledge of the dispute, in a bad place: if it can’t find a way to broker a truce or reach a settlement between now and Thursday, find another debate locale elsewhere in America’s largest (and arguably most Democratic) state.

Which is tougher than it may seem.

A little over a month ago, when the UCLA labor imbroglio hit the fan, I wrote this snarky column for The Washington Post highlighting the trouble with Democrats organizing a presidential debate in California (something that hasn’t happened since January 2008).

For example, the DNC could reach out to the nearby Pat Brown Institute for Public Affairs and see if it has space available. Then again, that puts the Democrats at the mercy of the political inner workings of Cal State Los Angeles, which houses the institute. The odds of that university likewise having labor problems?

Pat Brown (Jerry’s dad) last governed over a half-century ago (Ronald Reagan best him in California’s 1966 gubernatorial race). A first-time voter in the last election to feature the elder Brown is well into his or her septuagenarian years.

Yes, Pat Brown is an important figure in California history, as a builder of waterways and freeways (speaking of freeways, take a look at this map and tell me how much fun it’d be to get to that institute during the Thursday afternoon commute).

However, the first Gov. Brown is not exactly an avatar for a younger woke crowd (nor is son Jerry, for that matter, even though he governed California for almost all of this decade). Imagine taking a busload of Gen Z voters a Pat Boone concert. Or, better yet, the Democrats moving their September debate in Houston to Lyndon Johnson’s presidential library in Austin (this won’t be a problem for Republicans, who will be holding presidential debates at the Reagan presidential library in Simi Valley – about an hour’s drive northwest from Loyola Marymount – for the foreseeable future).

Yet another California option: the DNC could move its debate proceedings up the coast to San Francisco. Need we get into the visual problems with such a change?

Journey’s fabled “city by the bay” does an outstanding job of churning out Democratic luminaries (House Speaker Nancy Pelosi, California Gov. Gavin Newsom – and, as he’s scheduled to take part in the debate and San Francisco is his mailing address, billionaire activist Tom Steyer).

What else does San Francisco house? A lot of discarded needles and human excrement – and this oddity, which doesn’t speak to America’s suburban existence, where Democrats want to do better than in 2016: the San Francisco of present just might have more dogs than children in residence.

Ok, so back to Los Angeles . . . and the question of the tree, the forest and sound.

If the Democrats cancelled their debate, would anyone in that town notice – much less care?

Nationally, timing is a serious problem with Thursday night’s scheduling. If all goes according to plan, the debate will occur the day after the House supposedly votes on the two Trump impeachment articles. That comes after weeks of congressional Democrats and Republicans at their partisan worse.

Who’s up for another three hours of seven Democrats me-too’ing the awfulness of Donald Trump? Cancel the debate and Americans might see it as a tiding of comfort and joy.

But what about the blow to Los Angeles’ fragile ego should the DNC eighty-six the sixth candidates’ debate?

Mid-to-late December is a curious time in Los Angeles. The eve of the movie-award season is of far more local concern than who’s hot and who’s not in early primary states.

How are Joe Biden’s financials looking? Who cares, if you’re obsessed with your year-end bonus, as are entertainment executives, or whether you made the cut for the a-list holiday party circuit (that also applies to who did and didn’t send holiday cards0?

About the jockeying for the lead between Biden, Warren, Sanders and Buttigieg: it’s chump-change compared to what’s going on in America’s entertainment capital. In Los Angeles, 2020 and beyond entails the struggle-to-the-death content war between Netflix, Apple and Disney.

While Michael Bloomberg and Tom Steyer are showering the nation with their campaign ads, real “shock and awe” will be the instant fortune made once the latest Star Wars instalment opens the day after the Democratic debate.

We could go on with reasons why Los Angeles and this debate are hardly perfect together – December afternoons by the Pacific Ocean are made for spectacular sunsets, not political hot air; besides, which matters more in status-conscience L.A.: a ringside seat to a primary-field debate or courtside seats for LeBron and the Lakers?

My suggestion: cancel this particular debate but give Los Angeles and California its due on Feb. 25, when the tenth Democratic presidential debate is currently slated.

It would be fitting for a state who’s sleepy electoral doesn’t wake to elections until soon before the voting deadline transpires (Californians will be receiving their vote-by-mail ballot on Jan. 3 – the same day as the Iowa caucuses and 60 days before California holds its primary).

Added bonus: that Feb. 25 debate is two weeks and two days after 2020’s oddly early Oscars show. Who knows? There might an opening in Brad and Leo’s schedules.

A February rescheduling also would give the Democratic National Committee the better part of ten weeks to find its way through the minefield that is planning a presidential debate in the Golden State that doesn’t offends union sensibilities.

What the ‘Blockheads’ at Pacific Gas & Electric Are Doing With Blockchain

Low-Cost Batteries Are About To Transform Multiple Industries