Home Business What If They Held A Debate And No One Came . . . Or Much Cared?
Business 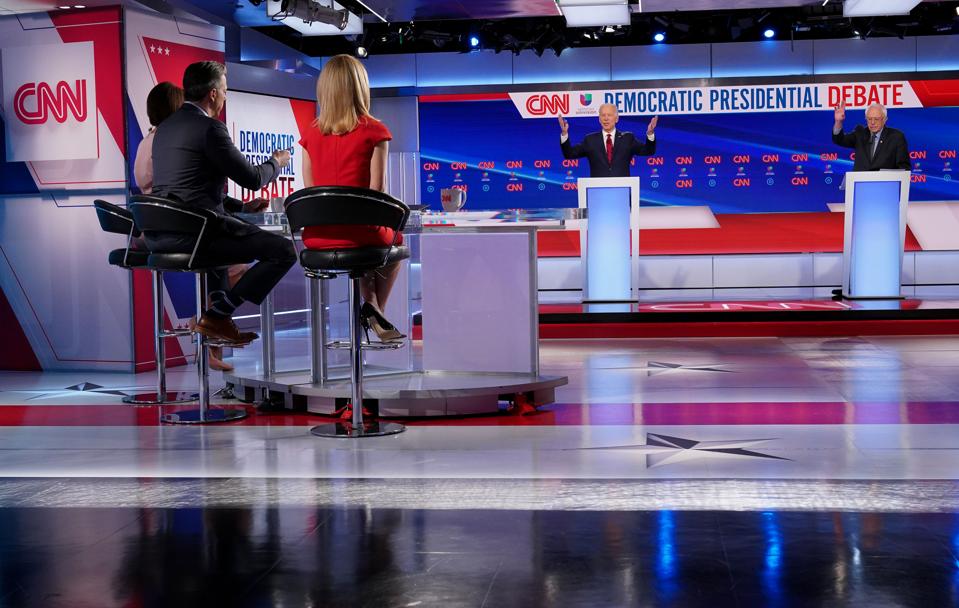 Ok, so maybe holding a presidential debate amidst the uncertainty of a global pandemic isn’t as tacky as, say, doing a partisan event in the immediate aftermath of the first Kennedy assassination, the Challenger explosion, or the 9/11 attacks. Still, there was something seemingly inappropriate and unbecoming about Sunday night’s meeting of the minds in CNN’s Washington, D.C., bureau (live, but not before a studio audience).

Maybe it had something do with the debate occurring on the Ides of March – the American public left with the visual of two wizened senators (past and present) who seemingly have been running for office or loitering around Washington since Caesar crossed the Rubicon (the fact that no one made a single et tu joke shows just how humor-devoid the Democratic field is).

Or perhaps it was the newsworthiness of the two-hour event – or, the lack thereof.

Other than live-testing the two candidates for coronavirus (plus maybe some follow-up mental-acuity tests), what was it about this debate that would have made it must-see-tv?

After ten previous Democratic debates, we know where former Vice President Joe Biden and Vermont Sen Bernie Sanders stand on the issues, just as we know how far apart they remain on certain matters like health care.

Sanders rarely missed a chance to swing at his preferred piñatas.

“Senator Sanders, an asteroid is fast approaching the planet. What should we do?

“I’m glad you asked that question. Clearly this is a failure of a nation that doesn’t provide every citizen healthcare, that doesn’t punish the crooks on Wall Street and doesn’t make billionaires pay more in taxes.”

And Biden rarely passed a chance to revisit the past, be it the Obama years or his decades in the Senate (the funny thing about those recollections: other than the Thomas hearings and forcing Obama to show his hand on same-sex marriage, which the candidate did note during the debate, not many Biden moments stand out).

Yes, some news was made. The biggest headline: Biden committed to a female running mate (look for New Jersey Sen. Cory Booker to claim he was Eleanor Roosevelt in a past life). But that’s hardly a surprise, as it’s been a pet topic of the chattering class for days now. Though it does confirm that Biden doesn’t consume much in the way of conservative media.

At the same time the nation considers turning turtle, might I be so bold as to suggest a national time-out from presidential politics beginning this coming Wednesday?

This would apply to Biden and Sanders (and Hawaii Rep. Tulsi Gabbard, I suppose) – no public rallies, no primaries in March and April, and no debates (the next one slated for April 20, at a site to be determined).

The ban also applies to President Trump. No MAGA rallies for March and April.

Yes, this complicates the Democratic nomination process. Twenty-one Democratic primaries and caucuses would have to be rescheduled. Then again, there are five Tuesdays in the month of June. Is it really that difficult to reshuffle the deck?

What to do during this campaign moratorium? I’d suggest it’s an opportunity to address a different kind of scourge that afflicts our nation: low-information voters. If people are going to become shut-ins, let’s encourage them to curl up with a good book — or some candidates’ platforms.

And here’s a link to Sanders’ positions.

And, in the spirit of fair and balanced, here’s a link to Trump’s promises from the last presidential election.

Two months without the visual distraction of presidential campaigning would afford the public a chance to get past the shallow, skewed rhetoric that passes for daily discourse and actually read what the candidates promise (or have promised) to achieve.

For example, does Biden really want to seize guns? And where exactly is he on climate change?

How does Sanders, who takes issue with some traditional U.S. allies, define a “responsible, comprehensive foreign policy?” And where too is he on guns?

As for Trump, how many of his 2016 promises that remain “partially delivered” will see the light of day either before this election or in a second term?

All of that is good reading – and knowledge that’s possible when the American people aren’t being flooded with the daily distraction that is the modern-day presidential campaign.

There is a non-facetious point to this suggestion. Times of crisis are supposed to bring Americans together – and ask if we can emerge stronger and improved for having survived a shared ordeal.

The 9/11 attacks (briefly) provided such a moment: Americans joined in candlelight vigils; the American flag became a rallying symbol. For a brief period of time, politicians set aside their partisan differences. In fact, roughly 150 members of Congress – Democrats and Republicans – stood shoulder-to-shoulder on the steps of the U.S. Capitol and joined in a chorus of God Bless America on the Capitol steps (were Biden and Sanders there that day?).

The coronavirus pandemic, despite its deadly uncertainty, could be another such unifying moment if our leaders deferred to their better natures – forgoing the sniping and the back-biting of an election year and, instead, getting to work and solving problems (not to mention laying the groundwork to prepare the nation for the next pandemic).

A time-out from presidential politics won’t bring the coronavirus a halt. Nor will it end many of the social disruptions and inconveniences that America now faces.

However, a brief moratorium – six weeks without debates and rallies and sophomoric slights – might be good for the nation’s mental health, not to mention a little soul-cleansing amidst the soul-sucking grind that is campaigning for the highest office in the land.

Here’s hoping we find a means to curbing the global pandemic.

Then, let’s find a cure to what ails America’s politics.

Coronavirus Is Now An Emergency: Here Are 12 Things To Do Right Now

Transcript of How to Start Your Speaking Business

‘Devs’ Review: The Exact Kind Of Weird One...