Breaking
Meet George The Poet: Spoken Word Artist Partnering...
Parrot Plumage Color May Be Linked To Body...
Recent Precious Metals Dip A Buying Opportunity
Looking For Venture Capital? Here’s How One 50+...
Growing Your Retirement Money Using 401(k) Dollar-Cost Averaging
Wellness Exec Abby Miller Levy Partners With Venture...
Microsoft Teams Issues Strike To Zoom With Tidal...
What’s Coming For The S&P 500 In October
4 Ways You Can Showcase Empathy With Your...
A $22,000 Microsoft Surface Will Soon Be For...
Zooming In – Should SMEs Invest In The...
iOS 14: The Surprising Security Risk Of Sharing...
How A Break From Lord Sugar Changed The...
Sunday’s Google Doodle Is Actually About Google
Office Of The Comptroller Of The Currency Chief...
Source Code For Multiple Windows Operating Systems Publicly...
Home Business What Is Climate Change, Explained By Italian Illustrators In 23 Fairy Tales
Business 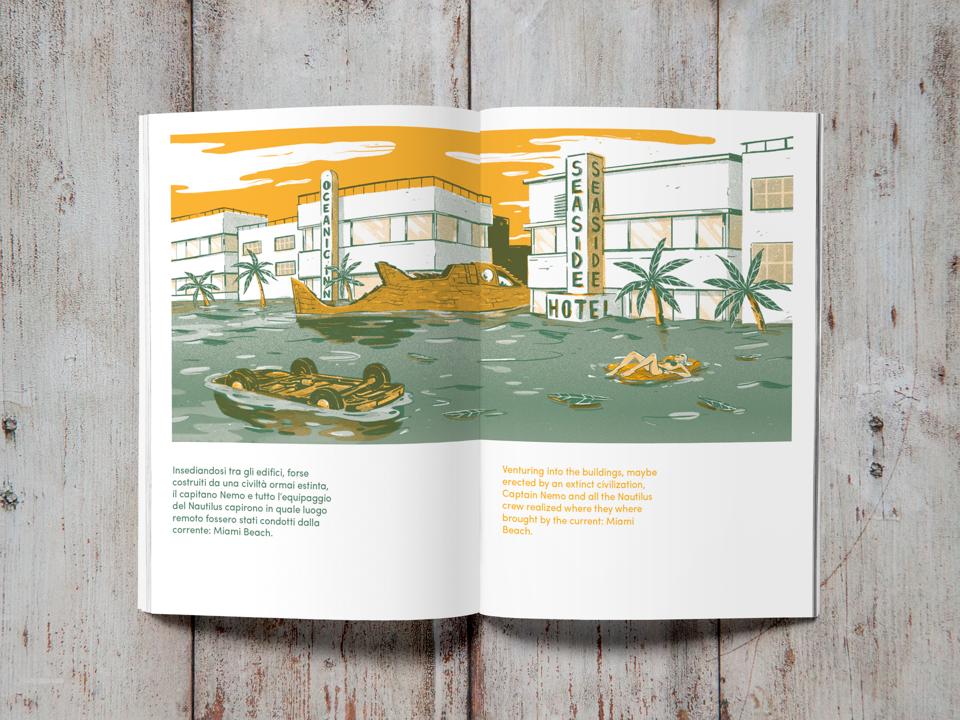 Young readers will soon learn something more besides the traditional moral messages of children’s books from the new Quello che c’era una volta – fairy tales after climate change (a wordplay around the “once upon a time” phrase). Eight authors based in Genoa, Italy, selected 23 stories and set them in ruined ecosystems, to help next generations develop critical thinking.

The project was born about a year and a half ago, when global focus on climate was at its peak and the genoese illustrators at Studio Rebigo had to come up with a new collective self-production to pitch. So they imagined how challenging it could become describing a forest, clean water and wild animals to kids who never had the chance to experience these things.

“At a time when everyone was talking about the future, about aware youth, and about the kind of world they will inherit from us, it seemed fair to think about our target audience, so the generations to come and their parents who are currently our peers,” illustrator Alessandro Rebigo explains. “Hence the question: what world and what stories will we leave them?”

The group explored deforestation, plastic pollution, global warming and urbanization, through the drawings of dystopian environmental disasters. Revised stories include folk tales like Little red riding hood and Jack and the beanstalk, as well as classics like Jules Verne’s Twenty thousand leagues under the seas: a world tour underwater, Hans Christian Andersen’s The little mermaid, Grimms’ Hansel and Gretel, Italo Calvino’s The baron in the trees and Frances Eliza Hodgson Burnett’s The secret garden.

The book was designed for children, and all those who deal with them, from parents to teachers. “We don’t want to teach anything, since we are still studying ourselves, but we hope the book can help readers develop critical thinking about these topics and eventually make them consider their little daily gestures.”

In terms of scientific accuracy, consulting Francesco Martinelli, naturalist and contributor for National Geographic, was key. “We used the data he suggested to make drawings that are faithful of experts’ forecasts,” Rebigo says. “To turn all this into a reader-friendly language, we chose to separate irony, which was entrusted to the images, and a second level of concrete reflection on the problem, entrusted to the infographics at the end of each thematic macro-chapter.”

The entire project is based on sustainability. As such, the studio relied on the genoese Tipografia Grafica KC, the first Eco-Print certified typography in Europe, and involved the local prison to offer inmates an opportunity for social and work reintegration.

Self-production is not new to the team, who has been working together since 2015 and previously published Epic Cycling (a collection of illustrated stories about the world of bikes), Laika (dedicated to the first dog in space) and the mosquito survival handbook Zanzine.

Quello che c’era una volta is not out yet, however crowdfunding will begin next month and will be crucial as cultural face-to-face events were postponed due to COVID-19. A virtual presentation party is scheduled to take place on September 8.

“We really hope that the encouraging reactions [we had] will be confirmed by crowdfunding,” Rebigo adds. “And that, above all, those will be a starting point to look at the planet we live with a more responsible eye.”