Breaking
Why Communication Is So Powerful In The Age...
OpenSooq, The Best Website to Buy Used Cars...
Hot Tips to Reduce MacBook Pro Fan Noise
How to Make the Most Out of Your...
7 Examples Of Using AI For SEO
Why you Should Always Try the Demo Slots...
How to Launch a New Restaurant Business
Start the Year Debt Free
How to clear a browser cache on a...
Which are the best software providers of slots...
How Investing Can Help You Save For Retirement
Top progressive betting strategies for slot machines
Key Software Tests to Conduct Before Product Launch
Why so many people play slots online in...
Why businesses should prioritise Cyber Security
What You And Your RTO Business Need To...
Home Business What Is The Stock Market Trying To Tell Us About The Economy? And Should We Listen?
BusinessFinance

What Is The Stock Market Trying To Tell Us About The Economy? And Should We Listen? 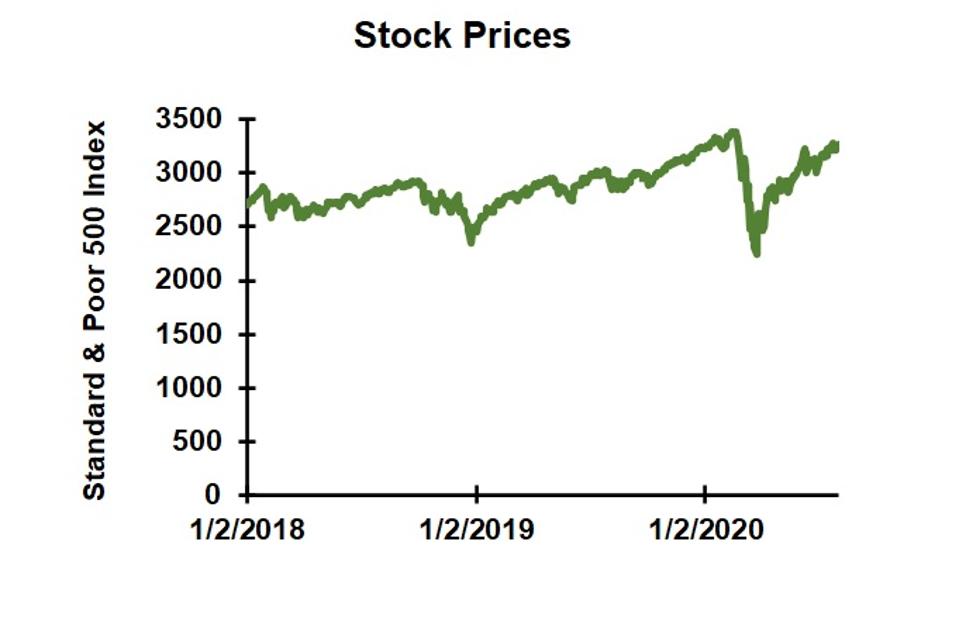 Dr. Bill Conerly based on data from Standard & Poor’s

If the stock market is our mother, she says, “There, there. Everything’s goings to be all right.” The market is not actually our mother, but that’s what it seems to be saying. Everything is going to be all right. The market finished July just three percent away from the all-time record high set on February 17, 2020, just before the truth of Covid-19 hit investors. A disease that drove U.S. GDP down by 32.9%, and world GDP down by probably a comparable amount, seems not to bother the stock market.

The stock market reflects views of the future, not the current situation, and investors seem to think the future looks good. Or at least good enough to justify owning stocks rather than other assets, such as bonds or real estate or cash. And those are the two keys to understanding recent pricing: looking forward, and comparing stocks to alternatives.

The stock market begins to rise well before recessions are over. And keep in mind the economists’ definition of recession: the time period when the economy is declining. The recession is over when the economy starts growing again, even though it is still low.

Stock prices usually begin rising four or five months before the recession is over. In the last recession, the S&P 500 hit a closing low on March 9, 2009. Economists judged the end of the recession to be July 2009, four months later. By July 31, stocks had risen a huge 46%. The earliest that stocks turned up as in the 1953-54 recession, when the low point occurred the very first month of the recession. All through the rest of the downturn, stock prices rose.

The shortest time lag between stock market low point and the end of the recession was in 2001, when the 9/11 attacks drove stocks to a low just two months before the economy turned up.

So the stock market starts rising while GDP is falling and long before GDP has recovered the ground it lost early in the recession. The average gain from stock market low to the end of recession is 20.3%.

Today’s stock market seems to reflect this pattern, reinforced by greater emphasis on distant investment returns. Financial researchers model a company’s worth based on the present value of future earnings. “Present value” is a term of art meaning the future value has been discounted by some interest rate. When interest rates are high, those future earnings are heavily discounted. When interest rates are low, as they are now, not much discount is taken for the time value of money.

In today’s low interest rate environment, investors place almost as much emphasis on the far future as the near future. So the lousy earnings expected in the rest of 2020 and 2021 are mostly offset by good earnings in later years.

Moody’s Baa bond index yields just 3.15%, the lowest since 1947. Money market funds are paying approximately nothing. Real estate could be tempting, but which sector? Retail could be toast pretty soon, many offices are unused and apartment tenants may not pay rent. Industrial real estate, which includes warehouses, and data centers have a bright outlook, but their prices have already risen (illustrated by REIT returns).

One doesn’t have to be a raving optimist to think that stocks will have better returns in the future than the most popular alternatives. But that conclusion brings us to the investor’s dilemma: stocks look like the best option, but they are priced so high that maybe they won’t outperform the alternatives, or at least not by enough to justify the extra risk.

Is the stock market, life our mothers, trying to tell us something about the future? Certainly investors are behaving as if the future will be fine, but given the weak alternatives, investors may be assuming that we’ll have a two or even three bad years before things really get better. The stock market is a very imperfect forecasting device, but it does offer a good insight when we’re in the middle of a recession: the economy will, at some time, get better.