Home Business What Jinx? Joe Burrow Just Turned In One Of The Best Post-Heisman Performances In History
Business

What Jinx? Joe Burrow Just Turned In One Of The Best Post-Heisman Performances In History 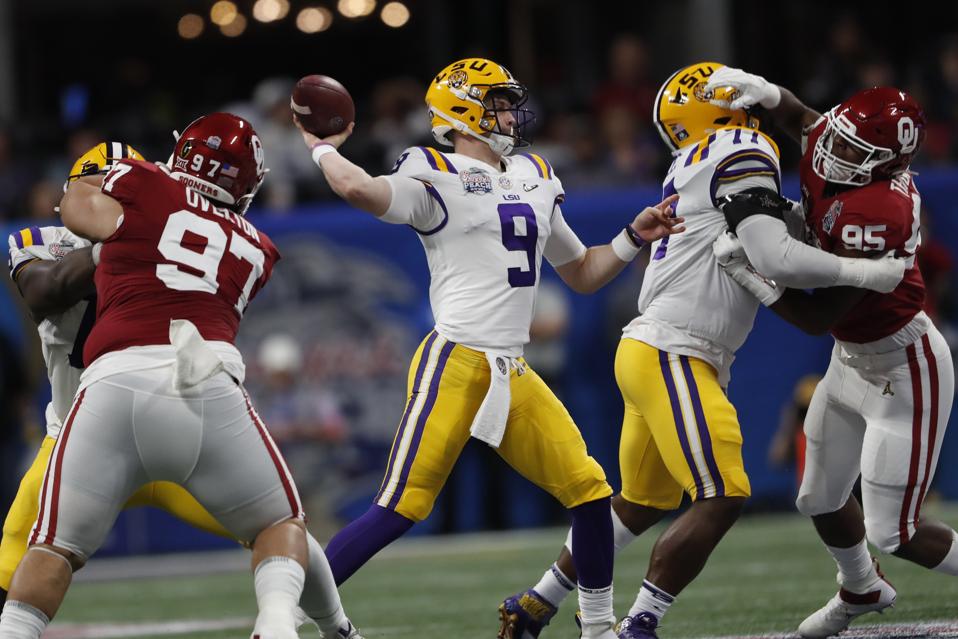 For those who buy into such superstitions, Joe Burrow had at least two notorious jinxes working against him entering Saturday’s College Football Playoff semifinal date with Oklahoma.

Not only had LSU’s quarterback tempted fate by winning the Heisman Trophy earlier this month, he was also featured on the cover of Sports Illustrated’s Dec. 2 issue.

But instead of becoming the kiss of death for Burrow and the top-ranked Tigers, those two sources of bad karma apparently canceled each other out on Saturday. Burrow did not fall victim to the curse that struck so many Heisman winners immediately after winning college football’s most coveted individual award, nor did he become yet another SI cover boy to flop once the spotlight centered upon him.

Instead, Burrow turned in the greatest performance in CFP history and arguably the top showing by a Heisman winner in the award’s modern-day history, helping LSU clinch a spot in the CFP final with a 63-28 win over the Sooners.

At the very least, Burrow’s stat line Saturday (29-for-39, 493 yards, seven passing touchdowns and one rushing TD) rivals some of the most notable postseason performances by Heisman winners over the last 25 years, and Oklahoma fans should be forewarned that this list will dredge up some unpleasant memories. 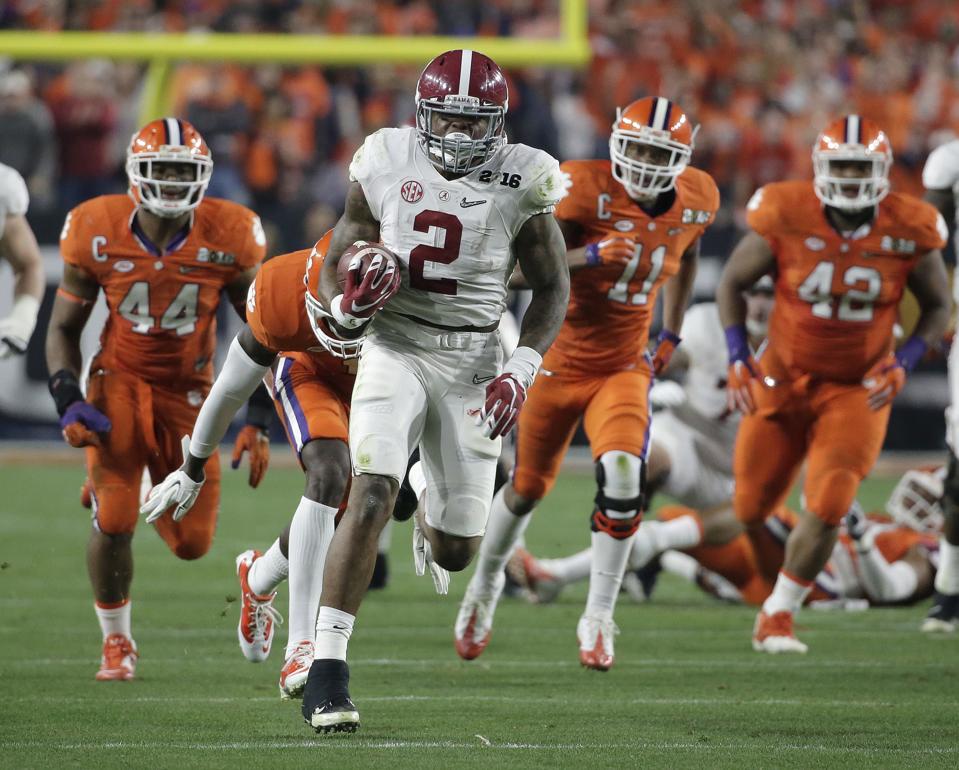 Alabama’s Derrick Henry rushed for three touchdowns against Clemson in the CFP championship game at … [+] the end of the 2015 season. (AP Photo/Chris Carlson, File)

Those are among the happier postseason results for Heisman winners, but that group has experienced more than its share of disappointment, as well. Heisman winners’ teams had a 3-4 postseason record in the CFP era prior to Saturday, and the award’s winners were just 15-12 in all postseason games dating back 25 years to Rashaan Salaam’s 1994 win. In fact, the Heisman winner’s team had lost each of the last three postseason games before LSU and Burrow emphatically ended that strange streak against the Sooners.

Knowing what we’ve seen and heard from Burrow throughout the season, this will not mean much to him yet. There is still another game to go, and defending champion Clemson will hardly be a pushover on Jan. 13 (8 p.m. ET, ESPN). Burrow fully understands that his semifinal performance will be little more than a historical footnote should Clemson’s stout defense shut down LSU in the championship game.

That beyond-his-years tunnel vision is a major part of what endeared him to LSU fans over the last two seasons. What most endeared him to folks on the bayou, however, was his incredible on-field performance. If he shines in the final game and LSU closes out an undefeated season with a national title, historians will have reason to evaluate whether Burrow’s 2019 campaign was truly the best of all time.

After all, he didn’t just win the Heisman earlier this month, he won it by the widest margin ever.

He has not just broken the SEC’s single-season records for passing yards and touchdown passes this season (he currently has 5,208 and 55), he has put himself within reach of FBS records for touchdown passes (he’s three away from tying Colt Brennan’s 2006 record at 58), completion percentage (at 77.62%, Burrow is just ahead of Colt McCoy’s record 76.67% from 2008) and passer rating (Alabama’s Tua Tagovailoa set the bar with a 199.45 rating last year; Burrow currently sits at 204.6).

And he did not simply break CFP records for passing yards and touchdown passes on Saturday, he set new playoff benchmarks around halftime. Burrow’s absurd passing numbers after two quarters against Oklahoma: 21-for-27, 403 yards, seven touchdowns. The previous CFP records for TD passes (four, held by Tagovailoa and Deshaun Watson) and passing yards (420, Watson) no longer stand, nor do many other CFP offensive records set before LSU took the field in Atlanta on Saturday.

College football has been around for 150 years, and the sport has been played by some of the most remarkable athletes the U.S. viewing public will ever witness. It may seem like blasphemy to even propose that Burrow’s 2019 season should rank ahead of the Heisman-winning campaigns of Herschel Walker, Tim Tebow, Bo Jackson, Barry Sanders, O.J. Simpson or many other names on the prestigious list. But with one game to go, there are few statistical comparisons for what Burrow has already accomplished, frequently against better-than-average SEC defenses.

If he turns in yet another dominant performance against a Clemson defense that statistically ranks as the nation’s best, it will be difficult to rate many individual seasons ahead of what Burrow accomplished in a remarkable 2019.

AFTER WINNING THE HEISMAN

For purposes of comparison, here is how Joe Burrow’s post-Heisman performance stacks up against the previous 25 Heisman Trophy winners:

Heavy-Duty Hydrogen: Fuel Cell Trains And Trucks Power Up For The 2020s

The ‘Death’ Of Mr. Peanut Highlights The Surreal...

A Change In Formation But Similar Frustration; Now...