The R-word: recession. Are we heading into one, the first time officially in twelve years? Stocks have been reaching toward bear-market levels, supply-chains are scrambled thanks to the health scare, and people are thinking twice about their routines in work and leisure. National Economic Council Director Larry Kudlow has been the chief administration representative offering assurances that the American economy might well be poised, at this very juncture, to bound yet higher. What can be the substance behind Director Kudlow’s irrepressible trademark sunniness in the case we are faced with today? 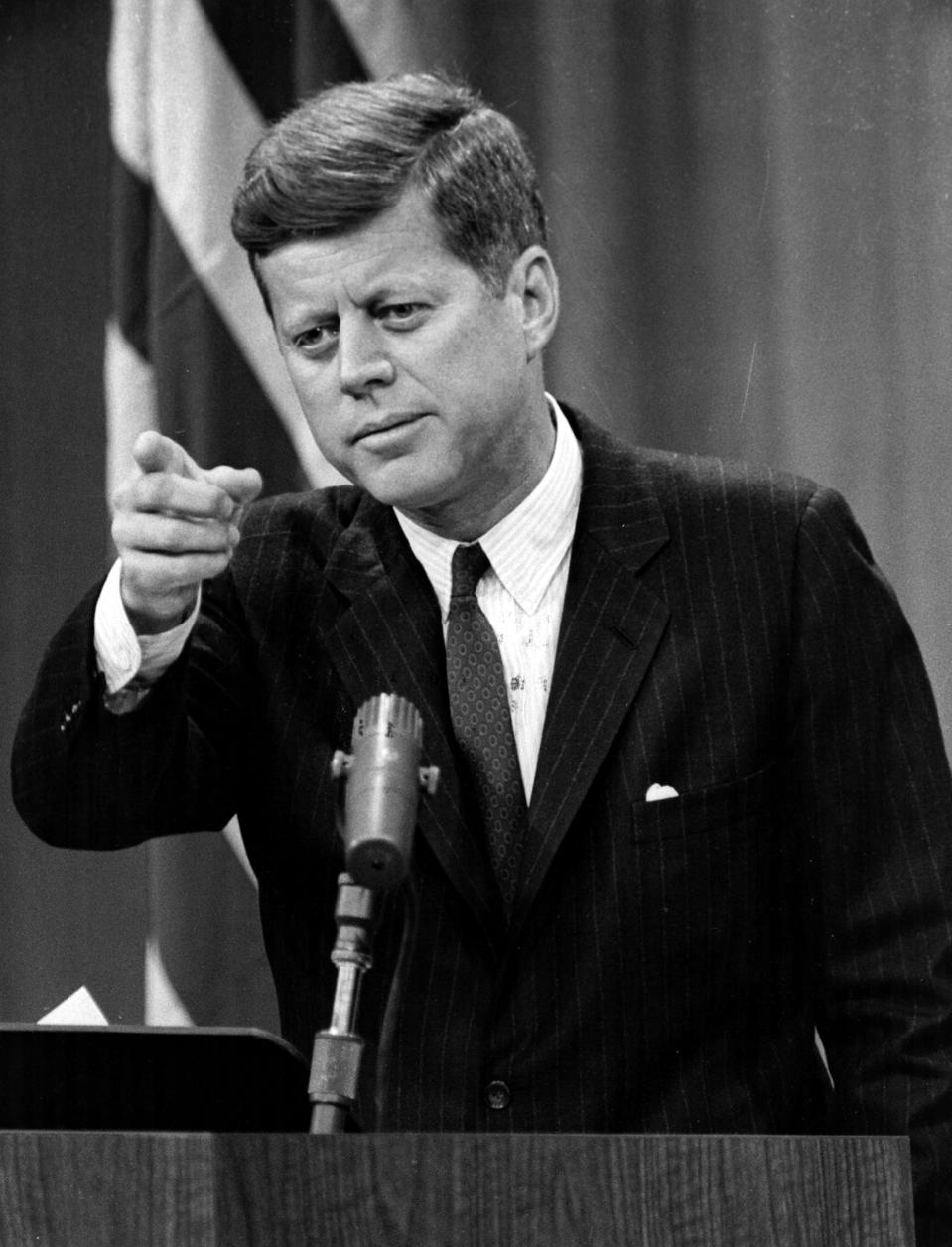 Larry Kudlow and I spent several years together, after the 2007-9 recession, researching and discussing one particular moment of potential economic crisis that never materialized. This was the stock market drop (of about 30%), upsurge in antibusiness sentiment, and rampant forecasts of recession of the spring of 1962. This work of ours was in pursuit of the book we were writing together, a history of the big tax cut President John F. Kennedy brought into being on account of the experience that spring, JFK and the Reagan Revolution: A Secret History of American Prosperity (2016).

I would venture that the key to understanding Larry’s optimism today is to ascertain what he learned and came to terms with in his recent heavy investigation of 1962. For in 1962, despite the recession-sign histrionics, there came no slump. To the contrary, economic growth cruised at more than 5 percent that year, as it would average in the eight-year season of uninterrupted growth from 1961-69.

The aura of crisis in 1962 had several stems. The first was the frequency of recessions. They were happening about every three years. Indeed they were rather baked into the fiscal code, namely the steeply progressive income tax schedules, which wonks called an “automatic stabilizer.” When the economy took off on a little boom, a greater share of private earning got taxed away, dulling the boom and leading to a little bust, which in turn reduced earning and the proportion given up in taxes, starting the cycle over again. If you were the last hired and first fired, you were chronically unemployed. The spring of 1962 was the beginning of the third year of expansion. Expectations were for a slump-on-schedule.

The second was Kennedy’s labor policy. He had become enamored in his first year in office with having his officials help negotiate labor peace at the big producers, particularly the steel industry. Executives thought nothing of flouting an agreement made on JFK’s goodwill terms. When they did so in April 1962 JFK threw a juvenile fit, swearing and having Justice agents show up at the big bosses’ homes at 4am.

Businessmen responded by making fun of the cub president, sporting buttons mocking the man and to this day regarding JFK’s June commencement address at Yale as the one in which he tried to tell the members of the establishment that they were all wrong. That month, the forecasts of recession came on in number. The stock market was about 30% below its December high.

Kennedy at last decided upon action. It did not involve fiscal stimulus. It did not involve interest-rate cuts. Indeed, he had done these sorts of things the previous year, with no effect on the recession outlook. Rather, he decided to reform fiscal and monetary policy—for the long term, and in the direction of the free market. On the fiscal side, he called for two big permanent tax cuts. One affected business, an investment tax credit and a reform of depreciation schedules. The other was personal, an upwards of 30% reduction in every rate of the income tax.

In monetary policy, following the guidance of his treasury secretary C. Douglas Dillon, he committed to defining the dollar at its given rate of $35 per ounce of gold. The fiscal tax cuts at the margin, and on business and capital outlays, would, he reasoned, so heighten demand for the dollar that his promise to define the dollar at its received price and in gold would lessen speculation against it—and hence activate more real activity in the economy.

This policy was aired publicly from the Yale speech in June through a TV address in August. The moves were so credible, and refreshing, that they created their own momentum. The recession forecasts fell away, as opposition to JFK’s plans had to give as the economy clearly came to anticipate them. He did not devalue the dollar, and his final tax bill was well on its way to Congressional approval at the time of the assassination a year and a half later. He had also committed to reducing trade barriers and, in a rare permanent mistake, to unionizing governmental workers.

The recession that never came in 1962 proved one of the greatest non-events in modern American economic history. Because there was no recession, the well-established and mordant pattern of frequent recessions was broken. Recessions had come in 1949, 1953, 1957, and 1960. The sense among forecasters in the early 1960s was that the periodicity of the onset of recessions was shrinking from 36 to merely twenty-four months. The slipping of the slump in 1962 blew these models away.

Furthermore, because there was no recession in 1962, but rather the building of a long-term trend of 5 percent per annum growth, “postwar prosperity” became more than just a turn of phrase; it became a widely lived experience. Missing the recession in 1962 was the crucial moment after which Americans—indeed the population of the globe—realized that the United States had put the privations of the Great Depression and the halting, unsure aftermath to bed for good and reclaimed its birthright as the land of opportunity. The statistics bespeak as much. Had the 1953-60 trend of circa 2.4 percent growth with recessions every two years or so held—the stuff of Michael Harrington’s Other America (1962) which Larry and I studied closely—America’s decline in eyes at home and abroad would have been entrenched well before the 1970s.

Larry and I knew we had something in the spring of 1962. We had a hinge on which history turned, something the Hegelians might even call a world-historical moment.

We were also delving into and compiling this history while witnessing the Barack Obama “recovery,” which Casey Mulligan had proven in The Redistribution Recession (2012) to have owed its legendary weakness to the very recession-fighting methods that had come in the name of confronting the 2008-09 crisis. The expansion of all manner of means-tested benefits increased the real marginal tax rate, inclusive of the loss of benefits, once one lands well-paying work, Mulligan showed. This occasioned the the army of labor-force dropouts for which the Obama years are justly notorious. Social-security tax holidays, rebate checks, shovel-ready projects, helicopter money (coupled with predatory federal regulation of the banks, especially smaller ones), the expansion of means-tested and phased-out benefits, not to mention foreign wars to mop up in the service those in un-moneyed circumstances—these warhorses of Keynesian recession-fighting proved themselves laughable when not outrageous in the 2000s, under both George W. Bush and Obama.

JFK had offered another way, that of long-term reform in the free-market direction precisely at the point of crisis. It was amazing that so few had considered his model since. This was an effect of the assassination. JFK’s absence after 1963 enabled the distortion of the record at the hand of policy opportunists, that JFK had been a Keynesian, etc. etc.

Larry has an ace up his sleeve as we contemplate this potential economic pause. The administration he is a part of has his knowledge that a bold recommitment to free-market policy for the long run has proven the most splendid remedy ever tried given a whiff of crisis.

Why Are There So Few Women In Power? The Answer Is You + Elizabeth Warren

WWE Criticized For Cutting Hundreds Of Staff Despite...

‘Watchmen’ Has An Important Post-Credits Scene And TV...

Eli Manning Will Get His Giant Send-off Afterall