Breaking
How, When And Where You Can See A...
New $2.2 Trillion Stimulus Bill Proposed—$1,200 Stimulus Checks,...
Why Do We Do What We Do? Manipulating...
California Brand Goes All-American As Amazon Bans Foreign...
The 3 Best Analytics Companies of 2020
Senator Cory Booker: Supporting Small, Minority-Owned Businesses Will...
Trump’s Taxes Are Finally Leaked—What’s Next?
Washington Heats Up Ahead Of First Presidential Debate:...
Systemic Racism Leads To Disparities In Nursing Home...
The New Regular: Prepare For Conflicts Of Customer...
Web VR.0 – Have VR Websites (Finally) Arrived?...
This Next Evolution Of E-Commerce Did $18 Billion...
This Next Evolution Of Ecommerce Did $18 Billion...
IRS Taxes Most Lawsuit Settlements And Exact Wording...
13 Questions To Answer Before You Die
Just Launched: Long-Term Stock Exchange For Companies Building...
Home Technology What Prior Pandemics May Reveal About The Path Of COVID-19 In America
Technology 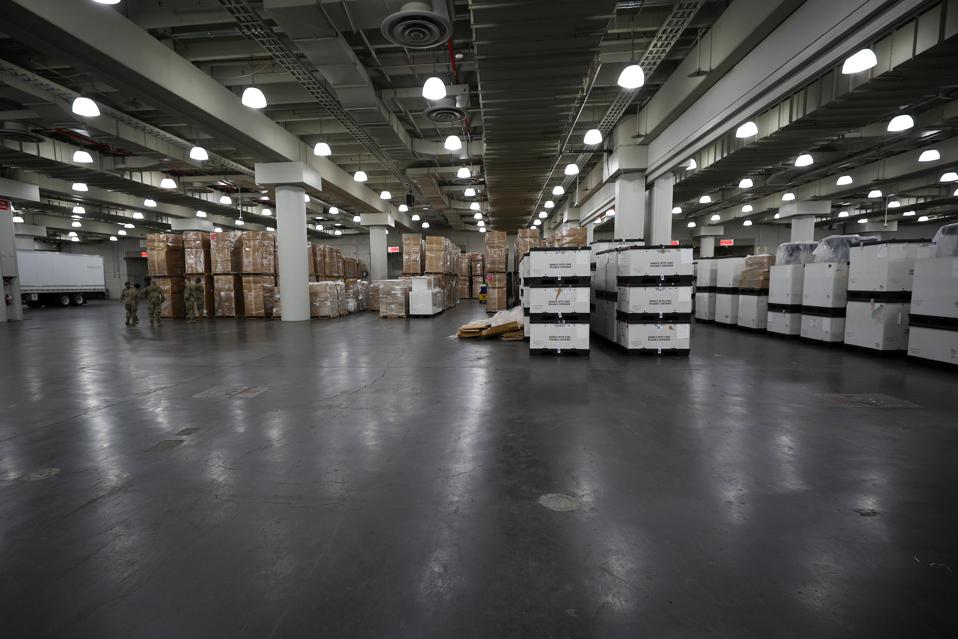 The Javits Center in New York City being turned into an emergency hospital to deal with the Covid-19 … [+] pandemic.

Over the past month, coronavirus has spread rampantly. At latest count (March 23rd), over 30,000 Americans have been infected. Each morning brings grim headlines and a steadily rising number of cases. While much remains uncertain, examining prior disease outbreaks can shed light on the ways this pandemic may develop.

In November 2002, a farmer in China died of a strange flu-like illness. As the disease spread across the region, public health efforts were hampered by the slow reporting of cases. Finally, in March 2003, the World Health Organization (WHO) sounded the alarm.

Scientists determined that the outbreak, now called Severe Acute Respiratory Syndrome (SARS), was caused by a coronavirus. After the WHO announcement, governments acted quickly and collaboratively to halt the advance of SARS. Global measures were implemented to restrict travel, conduct extensive testing, and quarantine the sick. These decisive actions helped effectively contain the disease by July 2003. The final death toll was 774 people across 26 countries.

During the current crisis, Taiwan, Hong Kong, South Korea, and Singapore have had the greatest success in containing or greatly limiting coronavirus infections. All four developed comprehensive public health plans after SARS. When COVID-19 broke out in China, these places had the social and medical infrastructure to aggressively combat the disease. In South Korea, the number of new infections has fallen significantly thanks to a massive testing program that identified coronavirus carriers. South Korea’s healthcare system has also effectively delivered intensive care to the critically ill, resulting in a relatively lower case fatality rate.

While SARS and COVID-19 are genetically similar, there are a few important differences that made SARS easier to contain. First, SARS is less contagious than COVID-19 and tends to settle deep in the sufferer’s lungs. There are also few, if any, asymptomatic carriers of the virus that causes SARS. These factors made SARS less transmissible and easier to control. Perhaps more importantly, while just over 8,000 people contracted SARS, the number of COVID-19 cases already exceeds 350,000. This larger infected population makes containment exponentially harder. At an earlier stage in the outbreak, concerted international action would have had a better chance to stop the virus. Now, containment appears less likely.

In 2009, an apparently virulent form of the flu (H1N1) began spreading across the globe. Ominously, this flu sub-type had caused the “Spanish flu” in 1918, killing perhaps 50 million. The WHO declared H1N1 a pandemic and the Obama Administration declared a national emergency. The “Swine flu” pandemic received extensive media coverage and numerous events across America were cancelled or postponed.  The virus spread widely, infecting over 60 million Americans. At that scale, containment is futile. Fortunately, as more cases were recorded, the early case fatality rates plummeted. H1N1 ultimately proved little worse than the normal flu. Since 2009, minor outbreaks of H1N1 have recurred regularly.

Could COVID-19 follow a similar track? Case fatality rates likely to decline as more tests are conducted. Between asymptomatic carriers and people who never got sick enough to require medical treatment, test results almost certainly underestimate the total number of COVID-19 infections. Columbia University researchers estimate that there are at least eleven undetected cases for every reported case. Nations that have tested more have seen case fatality rates fall, as more mild cases are identified.

COVID-19 could evolve to become less deadly or the case fatality rate may be much lower than current estimates. If these optimistic hypotheses hold, COVID-19 could become just one of many seasonal maladies rather than a global menace. Unfortunately, based on data from thousands of reported cases, COVID-19 appears to be a virulent disease that can prove life-threatening even for the young and healthy.

Stretched to the limit

In February 1957, Singapore reported a new form of the flu. In April it was reported in Hong Kong. By the summer, the “Asian flu” had reached the American mainland. Hospitals across the country filled with flu patients.  After several harrowing weeks filled with fears of medical shortages, the nation emerged from the pandemic. Almost 120,000 Americans had died, several times more than in a typical flu season. Around the world, the death toll may have reached two million.

The 1957 flu strained the healthcare system and proved particularly deadly for vulnerable populations. Similarly, immunocompromised and elderly individuals have suffered high fatality rates from COVID-19. Today, nearly 45% of Americans have a chronic health condition, and almost 50 million are over 65. In short, a huge number of Americans are at elevated risk from COVID-19.  Italy, with the oldest population in Europe, offers a sobering warning. Northern Italy had one of the best healthcare systems in Europe. However, the deluge of COVID-19 cases has already forced doctors to ration medical care.

In America, drastic measures are required to protect the most vulnerable and reinforce the healthcare system. Even if COVID-19 proves less severe than feared, a sudden surge in hospitalizations could create an acute medical crisis. In order to avoid that potential catastrophe, the Center for Disease Control (CDC) are strongly advocating mitigation measures to “flatten the curve” of COVID-19 infections. Social distancing and shelter-in-place policies aim to slow the disease’s spread in order to buy time for the healthcare system and help it remain intact.

The “Spanish flu” in 1918 cut an almost unfathomable swath of devastation. In one year, more than three times as many people perished from the flu than had died during four years of WWI. The outbreak may have started in China, or France, or even Kansas. Regardless, by spring 1918, the virus was cutting down soldiers in the trenches faster than bullets. The comparatively mild spring wave was followed by a far more lethal autumn wave that inflicted massive casualties around the world. Nearly 700,000 Americans died, six times the number that fell on the battlefields of WWI. Frighteningly, this pandemic seemed disproportionately to kill young, healthy men. The pandemic briefly depressed American life expectancy by an astonishing ten years. Between 1918 and 1920, perhaps half the world caught the “Spanish flu.” This H1N1 flu had an estimated case fatality rate of 2.5%, over 25 times that of a typical flu.

In America, the “Spanish flu” overwhelmed healthcare systems, forcing the creation of numerous impromptu intake and treatment centers. Public health measures had major impacts on economic life across the nation. The Congressional Budget Office (CBO) recently estimated that a pandemic similar to the 1918 flu could cost the United States more than 4% of GDP, tipping the nation into a deep recession.

The CDC has estimated that between 40-60% of Americans may contract COVID-19. After that point, transmission will slow as the population acquires “herd immunity.” If fatality rates do not decline below what was has been reported in Wuhan, then the United States may be looking at over 3 million deaths from COVID-19. This seems like a true worst case scenario. However, even under the CDC’s scenarios, the American death toll could range from 200,000 to 1.7 million. Putting that in perspective, America’s total war dead (including non-combatants) since the Revolution is 1.3 million.

With a functioning modern health system, COVID-19 will probably be much less lethal than the 1918 flu pandemic. However, a healthcare system collapse could cause mortality to spike. A Johns Hopkins study indicated that while the United States has 160,000 ventilators, a 1918 level pandemic might require 740,000. Patients in severe respiratory distress who do not get a ventilator are unlikely to survive. Furthermore, the United States has fewer than 100,000 critical care hospital beds. At any time, about two-thirds of those are filled. If the virus’ spread is uncontrolled, the WHO and CDC forecast a massive shortage of these beds.  Finally, medical professionals will be stretched impossibly thin. Unquestionably, the United States will increase production of vital medical supplies and expand the medical workforce. However, the situation may still deteriorate into one resembling battlefield medicine. In those desperate circumstances, a triage process would determine which patients receive lifesaving care and which would be left to die. Italian doctors are already confronting these wrenching moral decisions.

The scenarios above are not predictions; merely analogies to previous outbreaks. Projecting the course of COVID-19 remains a daunting challenge. A critical unknown is how American society will respond. Decisions made in the next two weeks may prove decisive. If people obey strict social distancing and shelter-in-place policies, COVID-19’s spread may slow significantly. That slowdown would increase the chance that those in critical condition will get the help they need.  Please listen to the medical experts, stop the spread, and save lives. Stay home.