Breaking
How to Run Nonprofit Marketing Ads
Entrepreneurs Are Bringing Transparency To Home Buying And...
Best Incentive To Get Vaccinated: Money, Messaging, Or...
Page Level Query Analysis at Scale with Google...
How A CIO Can Align IT With Business...
Blogger of the Month: Jo, Girl Eats World
6 Things Women In Business Know That Men...
How to Use First-Party Data for Ad Personalization
Pressing Reset—Putting A Fallen Unicorn Back On Its...
How We Went Viral: Promoting Content with Influencers,...
Blame Olympic Record Price Tag For Return To...
Apple iOS 14.5 Release: Should You Upgrade?
How to Come up with Podcast Topics and...
Why Gaming Gear Company Razer Launched A $50...
Technical SEO Implementations to Increase the Impact of...
30 Brilliant Ways to Market Your Eco-Friendly Shopify...
Home Business What The Chiefs’ Franchise Tag Means For Chris Jones
Business

What The Chiefs’ Franchise Tag Means For Chris Jones 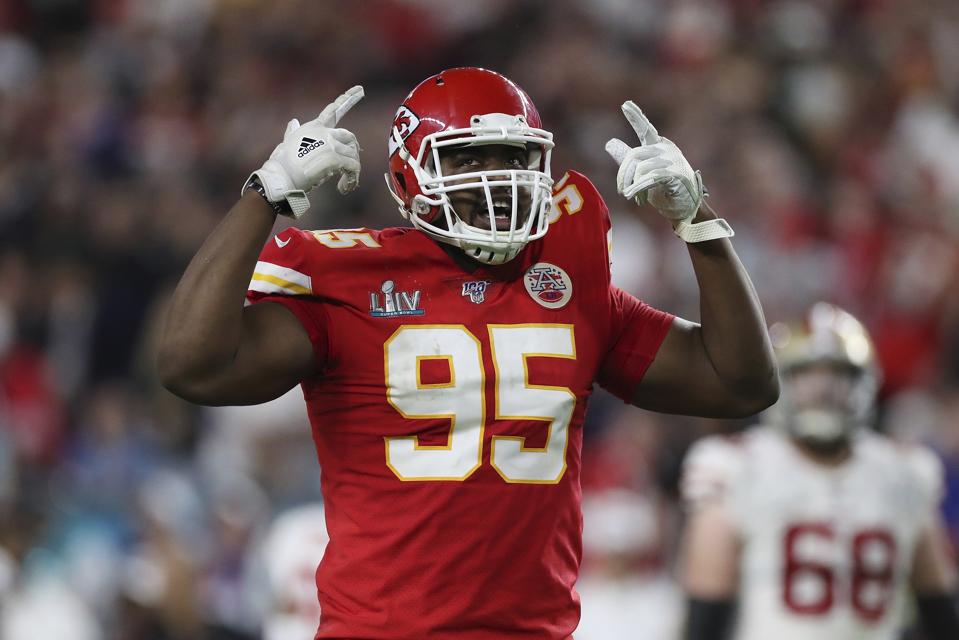 Kansas City Chiefs defensive tackle Chris Jones reacts after a play during the second half of the … [+] Super Bowl between the San Francisco 49ers and Kansas City Chiefs on Sunday, Feb. 2, 2020. (AP Photo/Steve Luciano)

No defensive player played a greater role in the Kansas City Chiefs’ Super Bowl LIV-winning season than Chris Jones, and the Chiefs made a move Thursday, which could ensure he remains in Kansas City in 2020.

According to the NFL Network, the Chiefs will place their franchise tag on him.

With his four-year, $6.2 million contract having expired, the 25-year-old Jones was slated to become an unrestricted free agent before the Chiefs made the move to secure his services.

At the NFL Combine this week, Chiefs general manager Brett Veach said he hoped to agree to a long-term deal with Jones, and that remains a possibility.

“Sometimes these things take some time to work through,” Veach told ESPN. “The franchise tag is something that we have the ability to use. We’d certainly like to see if we can work something out with him.”

Jones predominantly played defensive tackle for the first time in 2019 after the Chiefs switched to a 4-3 scheme under new defensive coordinator Steve Spagnuolo. He recorded nine sacks despite missing three games with a groin injury and was just as effective at his new position.

Despite placing the franchise tag on their valuable pass rusher, the Chiefs could still trade Jones.

Trading away Jones, arguably the best player on the defense, does not seem like the right or likely course of action.

The Chiefs, however, are in a bit of a bind with more than 20 free agents and what has been approximated as less than $20 million in salary cap room. And Veach is known for his aggressive wheeling and dealing.

Still, it’s hard to see the Chiefs getting rid of someone who might have been the team’s best performer in Super Bowl LIV.

Though he didn’t record a sack, Jones’ pressure helped force Jimmy Garoppolo’s second-quarter interception. He also deflected multiple passes, which thwarted the 49ers offense in the fourth quarter and enabled the Chiefs to come back from 10 points down.

“Sacks really don’t count and they don’t matter,” Jones said. “As long as you affect the game in any type of way, that’s what matters.”

The Chiefs have several important offseason matters as they look to defend their title, but Jones is priority No. 1.

They also must extend Patrick Mahomes, who is entering the fourth year of his $16.4 million rookie contract, which he clearly has outplayed.

Most expect Mahomes to become the NFL’s highest paid player by signing a deal worth more than $200 million and averaging more than $40 million a year.

Wide receiver Sammy Watkins is due to make $14 million this coming year, but none of it is guaranteed, and the Chiefs would only take a $7 million salary cap hit if he was released.

If the Chiefs can manage to retain Watkins and Jones for the long term, they’ll not only be a leading contender to repeat as Super Bowl champions, but also have a chance at forming a dynasty. In fact after Super Bowl LIV, Jones compared the Chiefs to the NBA’s most recent version.

“We’re like Golden State in their prime, baby,” he said.

This Is How Small Businesses Are Using Video Marketing In 2020